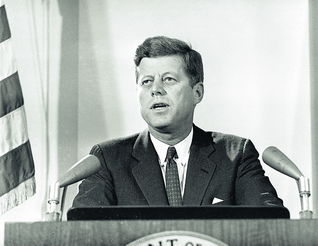 Had President Kennedy been forced to choose a response in the first 48 hours after an American spy plane discovered the Soviets sneaking nuclear-tipped missiles into Cuba, RFK had no doubt that his brother would have chosen an air strike against…

A strange time to remember. I think I was the only person I knew who was absolutely sure it was going to turn out to be a big bunch of nothing. My personal intuition was not screaming its usual warning of danger, but apparently everyone else was sure the world was about it end. It was long ago … Now playing brinksmanship with nuclear weapons is so commonplace that no one pays attention to it. It may not even make headlines. Times have changed a lot!