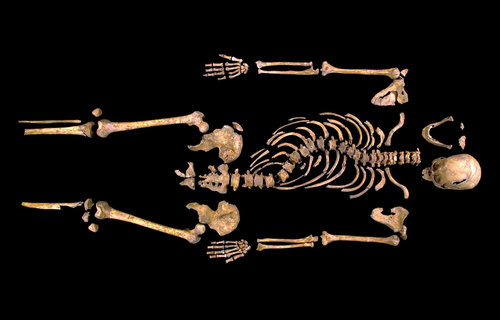 LEICESTER, England — Until it was discovered beneath a city parking lot last fall, the skeleton had lain unmarked, and unmourned, for more than 500 years. Friars fearful of the men who slew him in battle buried the man in haste, naked and anonymous, without a winding-sheet, rings or personal adornments of any kind, in a space so cramped his cloven skull was jammed upright and askew against the head of his shallow grave.

On Monday, confirming what many historians and archaeologists had suspected, a team of experts at the University of Leicester concluded on the basis of DNA and other evidence that the skeletal remains were those of King Richard III, for centuries the most reviled of English monarchs. But the conclusion, said to have been reached “beyond any reasonable doubt,” promised to achieve much more than an end to the oblivion that has been Richard’s fate since his death on Aug. 22, 1485, at the Battle of Bosworth Field, 20 miles from this ancient city in the sheep country of England’s East Midlands.

Among those who found his remains, there is a passionate belief that new attention drawn to Richard by the discovery will inspire a reappraisal that could rehabilitate the medieval king and show him to be a man with a strong sympathy for the rights of the common man, who was deeply wronged by his vengeful Tudor successors. Far from the villainous character memorialized in English histories, films and novels, far from Shakespeare’s damning representation of him as the limping, withered, haunted murderer of his two princely nephews, Richard III can become the subject of a new age of scholarship and popular reappraisal, these enthusiasts believe.

“I think he wanted to be found, he was ready to be found, and we found him, and now we can begin to tell the true story of who he was,” said Philippa Langley, a writer who has been a longtime and fervent member of the Richard III Society, an organization that has worked for decades to bring what it sees as justice to an unjustly vilified man. “Now,” Ms. Langley added, “we can rebury him with honor, and we can rebury him as a king.”

Other members of the team at the University of Leicester pointed to Ms. Langley as the inspiration behind the project, responsible for raising much of the estimated $250,000 — with major contributions from unnamed Americans — it cost to carry out the exhumation and the research that led to confirmation that indeed Richard had been found.

Ms. Langley’s account was that her research for a play about the king had led her to a hunch that Richard’s body would be found beneath the parking lot, in a corner of the buried ruins of the Greyfriars Priory, where John Rouse, a medieval historian writing in Latin within a few years after Richard’s death, had recorded him as having been buried. Other unverified accounts said the king’s body had been thrown by a mob into the River Soar, a mile or more from the priory.

Richard Taylor, the University of Leicester official who served as a coördinator for the project, said the last piece of the scientific puzzle fell into place with DNA findings that became available on Sunday, five months after the skeletal remains were uncovered. At that point, he said, members of the team knew that they had achieved something historic.

“We knew then, beyond reasonable doubt, that this was Richard III,” Mr. Taylor said. “We’re certain now, as certain as you can be of anything in life.”

The team’s leading geneticist, Turi King, said at a news conference that DNA samples from two modern-day descendants of Richard III’s family had provided a match with samples taken from the skeleton found in the priory ruins. Kevin Schurer, a historian and demographer, tracked down two living descendants of Anne of York, Richard III’s sister, one of them a London-based, Canadian-born furniture maker, Michael Ibsen, 55, and the other a second cousin of Mr. Ibsen’s who has requested anonymity.

Dr. King said tests conducted at three laboratories in England and France had found that the descendants’ mitochondrial DNA, a genetic element inherited through the maternal line of descent, matched that extracted from the parking lot skeleton. She said all three samples belonged to a type of mitochondrial DNA that is carried by only 1 to 2 percent of the English population, a rare enough group to satisfy the project team, pending more work on the samples, that a match had been found.

When she studied the results for the first time, she said, she “went very quiet, then did a little dance around the laboratory.”

For anyone who loves history, this is totally cool. I want more information!! Lots more.