Home › Family › Awakenings: Are we there yet?

Awakenings: Are we there yet?

I love western movies. I love the romance of the old west, the line of wagons rolling along in the shadow of the mountains, bravely heading to the achievement of  the nation’s manifest destiny. But I can’t forget that in building this country, we destroyed other nations, slaughtered thousands of men, women and children in a systematic, bureaucratic, state-sponsored persecution and murder of every Native tribe we encountered — our own American Holocaust. That the tides of history have ever been thus is undeniable, but it doesn’t make it less horrendous. So with the romance, there will always be an underlying bitter knowledge. We built our land on the blood and bones of those who were here long before us. 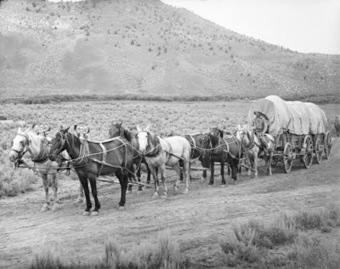 Needless to say, the mode of travel was not by air-conditioned automobile, camper or RV. Instead, it was by crude wagon, horseback or on foot. A grueling 2000-mile journey across western plains and mountainous trails would last five months. Conditions were harsh plagued with accidents, illness, raging river crossings, mud, dust, monotony, and often terror. In spite of unimaginable, unforeseen circumstances, they trekked onward … onward toward a dream, hope of better times in a land to the west.

The shadow of fear loomed endlessly regarding the possibility of encountering native Indians who had been reported as being savages. Can you imagine traveling into a territory where it was known for men to be killed and scalped while women were taken prisoner? That, of course, would indicate the women witnessed the brutal slaying of their husbands. While many of the women were eventually saved, it was reported they went insane and lived only a short time after being rescued from captivity. They had nothing left, their husbands were dead, more than likely the children too, wagons were burned and all possessions taken from them. They were stripped of everything in life they had ever known or owned.

Had it not been for the determination and perseverance of these early pioneers the west would not have been won. Winning, however, came at a high price for both the white man and the Native American Indians who, by the way, were not savages. But, that is another story. . .

So, back to our initial question: “Are we there yet?” I do fear had one asked that question he or she would not have been brave enough or in the condition to ask it again! What do you think?

After taming the eastern seaboard, crossing the Western Frontier
proved to be just as treacherous as crossing the Atlantic.
This, however, did not impede the push westward
as hope, faith, and courage continued to prevail.
By crude wagon they traveled
With limited communications
Across the Mississippi
Westward to the Appalachians

Without modern tools
Hands aching to the bone
Time for rejoicing

But, in spite of it all
Smiles of joy would beam
It was a place called home
A part of their dream

If you think a long car trip with the family can be stressful, try to imagine a trans-continental wagon train … with the kids.  Would anyone arrive at their far off destination with their sanity intact? Perhaps the journey accounts for the high level of guns and violence in the Old West. I bet it was that endless trip by covered wagon with the whole family, a level of togetherness that is almost incomprehensible.

I’d love to be able to retell this from the point of view of the Native Americans whose homelands were being invaded by people who had no respect for their customs, nor the slightest willingness to learn anything about the culture they despised. Our pioneers were so steeped in the righteousness of their cause, the rightness of their greed for the land that was not theirs, they could not even consider the possibility that there was another side to the story. What would they have done had positions been reversed? Would they have been thought savages for protecting their land, families, and homes?

That most of the pioneers were utterly ignorant is probably the best thing you can say about them. Those lands were not uninhabited. They were not empty, waiting for white people to come and civilize them. The rightful owners were not savagely attacking our brave adventurers: they were attempting to halt an invasion.

There were people living there, people with an ancient culture, homes, and families. They too had children, wives, hopes and dreams. In building this nation, we destroyed not one, but many nations.