Home › Boston › Boston locked down for massive manhunt; one bombing suspect killed by police, the other at-large

Boston locked down for massive manhunt; one bombing suspect killed by police, the other at-large 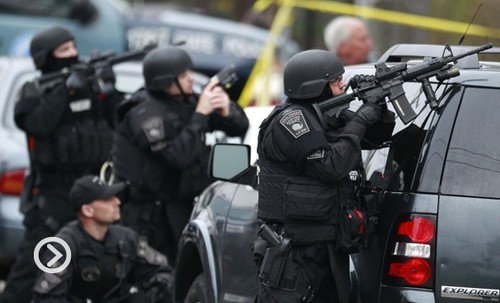 WATERTOWN, Mass. — A massive manhunt was underway Friday morning in Boston and its suburbs, after one suspect in the Boston Marathon bombings died in a confrontation with police and the second was identified as a 19-year-old immigrant from Kyrgystan who, a classmate said, attended high school in Cambridge, Mass. The two suspects are brothers, authorities said, and are believed to have lived in the United States with their family for several years.

State Department officials said the family appears to have arrived in the country legally. Alleged motive remains unclear, but they appear to be from the Southern Russian republic of Chechnya. Boston, Watertown and several other suburbs were in an unprecedented state of lockdown on Friday, with mass transit canceled, schools and business closed and residents ordered to stay indoors.

Law enforcement officials said they believed the at-large suspect, Dzhokhar Tsarnaev, may be strapped with explosives. They were taking extreme precautions in an effort to avoid further loss of life. A campus security officer at the Massachusetts Institute of Technology was killed in a confrontation with the suspects Thursday night, and a transit officer was critically wounded. “This situation is grave. We are here to protect public safety,” Police Commissioner Ed Davis said. “We believe this to be a terrorist. We believe this to be a man here to kill people.”

The suspects were introduced to the world via photos and video footage Thursday night. The one who was killed was identified as Tamerlan Tsarnaev, 26. The brothers’ alleged motive in the bombings, which killed three people and injured more than 170, remains unknown, but their family appears to have immigrated from the Southern Russian republic of Chechnya, and two law enforcement officials said there is a “Chechen connection” to the bombings. Dzhokhar Tsarnaev was born in Kyrgystan, law enforcement authorities said. He has a Massachusetts driver’s license.

Tamerlan Tsarnaev was born in Russia and became a legal U.S. resident in 2007. All public transportation was shut down in the greater Boston area Friday morning, officials said, and no vehicle traffic was permitted in or out of Watertown during the massive manhunt. Residents of Boston, Watertown, Newton, Waltham and elsewhere were asked to stay inside, with their doors locked. Colleges and universities announced they would close for the day, and businesses were instructed not to open. Streets were ghostly quiet. Thousands of officers searched house-to-house, and some areas were evacuated.

A Massachusetts State Police spokesman says police closed down a stretch of Norfolk Street in Cambridge, where they think Dzhokhar Tsarnaev and his family lived. “We don’t know if he’s there. There is a possibility the suspect is there,” the spokesman, David Procopio, said. Procopio said the manhunt was triggered after the brothers apparently robbed a 7-Eleven store on or near the MIT campus, about 10:20 p.m. Thursday night. They allegedly shot the Sean Collier, a 26-year-old MIT campus police officer, as he sat in his car. Collier, of Somerville, joined the force in January, 2012 after working as a civilian for the Somerville Police Department, officials said.

Marilyn Armstrong‘s insight:
I hope they get someone alive. Chechnya? Have we ever done something to them? Like, when and what? And why the Marathon? Huh?