It would be hard enough growing up any different kind of kid in a small rural community. Growing up the only Jew in a poverty-stricken mountain town would be significantly harder. So what would it be like growing up a brown-skinned Jewish girl — the only Jew, the only person of color and the only foreigner — in an inbred narrow-minded fundamentalist Christian town with a strong skinhead militia contingent and longstanding prejudices against anyone who is at all different?

Add it together and it goes far beyond difficult and moves into the realm of nearly impossible. 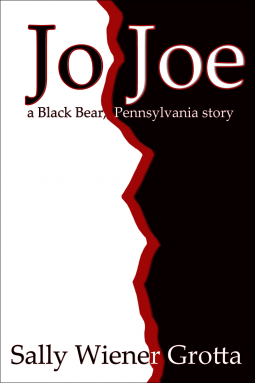 Judith Ormand spent her early life in Paris, France, the daughter of a Black man and a converted-to-Judaism white mother. After her mother dies of causes never clearly explained, she ends up being raised by her Moravian German grandparents in a small insular Pennsylvania mountain village.

Her growing up years were punctuated by racial attacks, by violence, hatred and fear. Her only protector? Joe Anderson, a handsome blond football player, son of a drunken father and a skinhead, drug-dealer brother. When Joe — her beloved best friend — turns against her, her world is shattered. She vows, encouraged by her grandmother, to never under any circumstances return to Black Bear, Pennsylvania.

But Gramma and Grampa are gone and despite any promises she made, Judith — Jo — must return and face the nightmare of her growing up years and uncover the truth about the people she loved and lost.

The book is a compelling  psychological drama and Judith Ormand is a fascinating character, a perfect target for bigoted small town residents. I found the story gripping and honest …. until it approached the end.

All of a sudden, the book went into overdrive, as if the author had reached her page limit and now had to quickly tie up all the loose ends and somehow give this sad story a happy ending. I didn’t believe the ending. I didn’t find it emotionally honest and didn’t think it made sense based on everything that had gone before. After such a very promising start, it was a big disappointment.

For all that, the book is worth the read. The misery of a child who is so very different trying to find happiness in a frightening and hostile environment is heart-wrenching. I wish the author had stayed the course and written the ending with the same integrity she gave to the story’s beginning and middle.

Jo Joe  is available as a hardcover from Amazon. It will be available in paperback and on Kindle in June 2013.