Home › Arts › How come you have so many cameras?

How come you have so many cameras?

This is a question that every photographer, professional or amateur, periodically asks him or herself … and is inevitably asked by friends, family, and occasionally, complete strangers. My answer is 7, plus the iPhone (on which I’ve never actually taken a picture) and a Coolpix that I don’t like and never use — which I guess totals 9. I am not counting cameras I used to own but gave away … or which I have somewhere in the house, but who knows where? 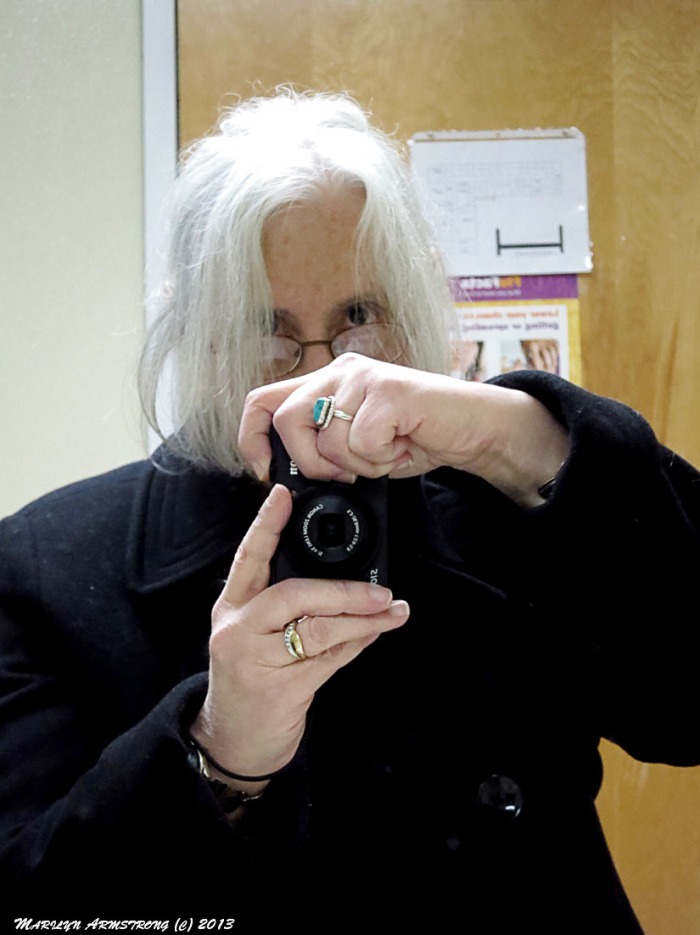 The little pocket-sized Canon Powershot S100 is my go everywhere favorite. Light and compact, with a good quality, fast, versatile lens, I carry it in my purse. It is the camera I always have with me so it gets a lot of use, even in situations where another camera would do a better job. This is the camera that embodies the maxim “The best camera is the one you have with you.” Technically, I guess I also have my iPhone S4, but I don’t consider it a camera.

The heart of my gear are my Olympus PENs — the PL-1, E-P3 and now the PM2. These are the cameras I use when I am planning to shoot and want the best quality. As part of the mirrorless micro 4/3 set, I also have a Panasonic Lumix DMC-GF3 I bought because it came with the 14mm f/2.8 lens and ironically, it was cheaper to buy the camera with the lens than to buy only the lens. It’s not a bad camera, but it is definitely there for backup and not as primary shooting gear. It has the advantage of being small and light and the same format as the Olympus PENs.

I picked up the Olympus 800UZ on sale when I wanted  a really long telephoto zoom. I live in the country in a river valley and this camera is particularly useful to get pictures of birds far across the pond where nothing else I own could possibly grab the shot.

Fully extended, it is 830 mm — a very long lens. Shooting with an extremely long telephoto lens is problematic, but this is even more of a problem because it is difficult to focus. Part of the issue is that fully extended, even the tiniest movement is greatly exaggerated and makes focusing impossible. I have to brace my arms against something solid or I can’t get any picture and sometimes can’t even find my subject. Nonetheless, it is the only camera I own that will capture really distant shots. It’s not a camera I use often, but it has a specific uses. It was a lot cheaper to buy the camera with the super zoom than to buy a very long lens for the PENs.

I also have a Canon Powershot SX260 HS. It too has a super-zoom, but not as extreme. It won’t capture swans and geese at the other side of the pond, but it will catch musicians at the far end of the concert hall … even in dim light. It’s easier to use and much faster focusing than the 800UZ.

For the joy of photography, my favorite remains the Olympus PEN E-P3. I use it most often paired with the “portrait” 45mm F/1.8 lens, a fine portrait lens, but also great for artistic shots of flowers, foliage, dogs, and people in general. The shallow depth of field makes ordinary shots look like art. It’s not me. It really is the lens.

I usually keep the 14mm F/2.8  Lumix lens on the Olympus PEN PM2 and the 40-140mm on the oldest of my PENs, the Olympus PEN E-PL-1. The Panasonic DMC-GF3 doesn’t get a lot of use, but I put the “normal” 14-42mm Olympus lens on it in case I have a “normal” lens emergency. I find it easier and faster to swap cameras than lenses, so having  bodies on which I can put different prime lenses may look more complicated, but for me is actually a simplification.

I grant you it tends to add up to a lot of cameras, if you just count them and don’t recognize that there are special uses for some of them and others are there because they came as part of a package or, like the PL-1, was an original camera that I’ve kept because it’s still a good camera, if a bit old.

Whenever I go out to shoot, I have to think hard about what I want to take with me, where I’m going and what lenses I’m likely to need. Because I won’t ever take everything … but hopefully, I’ll have what I need when I need it.

So that’s why I have so many cameras. And will probably have more eventually. How many do you have?