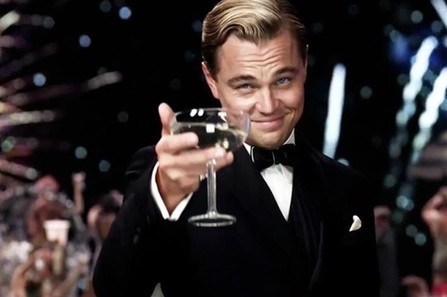 An adaptation of F. Scott Fitzgerald‘s Long Island-set novel, where Midwesterner Nick Carraway (Tobey Maguire) is lured into the lavish world of his neighbor, Jay Gatsby (Leonardo DiCaprio). Soon enough, however, Carraway will see through the cracks of Gatsby’s nouveau riche existence, where obsession, madness, and tragedy await.

Often lauded as a novel that cannot be filmed, this latest adaptation from Baz Luhrmann potentially comes the closest to capturing the hedonistic excess that is wrapped in this heartbreaking tale of love and obsession. Fans of Luhrmann’s style won’t be able to avoid seeing some of the borderline musical and choreographed sequences but that falls away fairly quickly as his ability to stage some sumptuous and lush looking visual set pieces works incredibly well in concert with the overall narrative. The script that he co-wrote with frequent collaborator Craig Pearce moves through the narrative at a brisk pace that never gives away the films nearly 2 and a half hour running time as he successfully allows to get swept up into this world, in spite of some uneven pacing from time to time, we never once get the urge to look at our watches. Luhrmann’s style allows us as the viewer to get swept up in his vision of utter excess as the rich get richer and retreat into their decadence while the poor suffer under the boot heel of their perceived betters’. It’s a story that shadows the perils of not only success and fame seeking that goes on even to this day, but the destructive nature of obsession and trying to recapture the past. There are admittedly some aspects of the narrative that ring a little hollow, but this might be the first adaptation of the novel where that point finally gets driven home as we are confronted with some fairly unlikable characters. A story like this always depends on the actors playing the roles, and this well cast adaptation works perfectly well thanks to the work from the leads on down.

In a change from the previous big screen adaptation in 1974, Leo DiCaprio as Jay Gatsby plays him as a nervous and fragile human being so desperate to be accepted into a world that will seemingly always shun him no matter what he does. DiCaprio makes Gatsby a flesh and blood, and most importantly a flawed one something that ultimately makes him a likeable and tragic character. Tobey Maguire as his neighbour and friend Nick Carraway works wonders in the role as he isn’t necessarily looking for something from Gatsby, something which Gatsby is sadly used to and is only trying to be a good friend to the man, they have great chemistry together as they both navigate the realms of the rich and powerful with varying degrees of success. Carey Mulligan the lost love Daisy Buchanan is OK but not given as much depth or room to work with in order to establish some legitimate character and Joel Edgerton as the pompous old money millionaire Tom Buchanan is a little more muted from previous versions of the film as some of the racial overtones in the novel are a little more subdued then they were in past version of the film. The ensemble is rounded out with the likes of Isla Fisher who gets a moment or two to shine as Myrtle Wilson while Jason Clarke and Elizabeth Debicki as George Wilson and Jordan Baker respectively get pushed a little more into the background then they should have perhaps been.

Ultimately, “The Great Gatsby” is a story that will more than likely never satisfy devotees and fans of the book, but in this latest rendition it manages to at least succeed in capturing the high and lows of the era. The story makes for an entertaining yet tragic love story with some characters that we can actually get behind as it mirrors some social issues that we face even today.

“The Great Gatsby” is now playing at theatres all across the country, check with your local listings for show times.

Worth a look-see. They keep trying, but so far, none of the versions has really gotten it. Maybe this time?

Like Loading...
‹ Daily Prompt: I Want to Know What Love Is — LOVE IS
Mother’s Day, As It Began — Julia Ward Howe ›