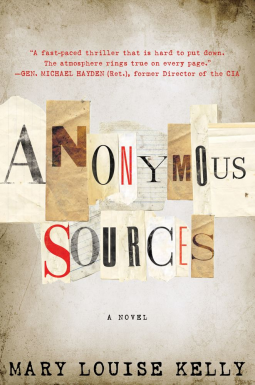 I wanted to love the book, but I didn’t. Considering the experience of the author, I expected more. And better.

The main character, Alexandra James, is a newspaper reporter. As is the author. I’m married to a reporter, so I’m familiar with the realities of the news business. Ms. Kelly is at home in that world and does a good job painting the landscape. It’s the best part of her novel.

Mary Louise Kelly, a veteran reporter who is the prototype for her fictional protagonist, brings a very impressive resume to this first novel. Her extensive experience in reporting the secret world of spies and security raised my expectations. Indeed, she has created a very attractive character in Alexandra James, the intrepid young reporter.

Although this is Ms. Kelly’s first novel, she is a writer. Her prose is elegant and smooth. She knows the places about which she writes and describes them with assurance and authority. We live in the Boston area where much of the action takes place; she never hits a false note — a refreshing change from many other books I’ve read. She captures dialogue well. Conversations sound natural. Her descriptive abilities extend to people. I feel I’d recognize her characters if I met them on the street. Her comfort with the tools of the trade, the techniques of her profession and the requirements of the job are spot on.

Unfortunately, I cannot say the same for plot and character development. I believed Alexandra James, the reporter. I didn’t believe Alexandra James, the person, the woman. Her motives seemed phony. They didn’t jibe with her credentials. How could she be so savvy and smart, but so naïve she couldn’t see a blatantly fake CIA shill when he was literally staring her in the face? The plot was driven by the central character’s ability to miss the obvious and do stupid stuff. Worse, she created the most blatant stereotyped Muslim extremists I’ve seen outside a Tom Clancy novel — that’s not a compliment. Her upper class Brits are caricatures, an embarrassing collection of clichés. Considering her real world experience, I find this puzzling.

To move the plot forward, Ms. Kelly drops clues. Heavy, unsubtle clues, they land with a bang, not a whimper. Wham, here’s a clue for you. Did you get that? No? Well, here (crash!) is another, right on your instep so you can’t possibly miss it. Ouch.

If the quality of the plot was even close to the quality of prose, it would have been a great mystery (thriller?). As it was, it was readable and mediocre. The end was rushed, as if she’d hit a deadline and had to wrap it up before they wrenched the manuscript from her hands.

Featuring cardboard characters and a brilliant heroine too dumb to take minimal precautions when she knows her life is in danger, I didn’t buy it. I liked Alexandra and hoped through the entire book she would become real to me. The potential was there. Protagonists with a secret, troubled past are de rigueur these days, but this protagonist’s dark secrets were contrived and rang false. It did nothing for the story or the character.

I hope Ms. Kelly steps back, does some thinking, and rebuilds her protagonist. Alexandra James could be a strong female character in a genre dominated by smart, macho guys, but dopey, troubled women. I’m rooting for the author and her protagonist. Mary Louise Kelly has the talent to do it right. Whether or not she will realize her potential we will have to wait and see.

If this is the first of a series — assuming the book sells well enough to generate interest in future books — Ms. Kelly needs to give us a story that keeps us guessing. Allows us to be surprised, maybe even shocked. Mysteries needs to be … well … mysterious. Thrillers should thrill us. Anonymous Sources was neither mysterious nor thrilling. The author needs to trust readers to follow clues and make discoveries without giving everything away up front.

The novel drops a lot of stitches. For example, her good (best?) friend Jess is introduced with considerable fanfare but plays no role in the story. There are no details of how the murders were carried out. What exactly happened? How did Thom Carlyle exit that window? It’s not easy to lift a full-grown man — dead weight — and push him through a small window single-handed. The bad guys are faceless and bodiless. Tall? Strong? Other than being Pakistani, you know close to nothing.

Who was behind the plot? Merely naming an organization without humanizing it isn’t enough. Scary bad guys are as important as heroes. The abrasive relationship between the protagonists and antagonists is critical to character and plot building. There was essentially no interaction between the good guys and bad guys and the book suffered for it.

Mary Louise Kelly is talented. She writes excellent description and believable dialogue. She has the makings of a fine storyteller, but she needs a much better thought out plot and characters. She surely has enough anecdotal material for dozens of books. Her skill with words is obvious.

Anonymous Sources is available from Amazon and other sellers as a hardcover and in Kindle format.