Daily Prompt: So long, it’s been good to know yuh …

So Long, Its Been Good To Know Yuh
(Dusty Old Dust)
Words and Music by Woody Guthrie

I’ve sung this song, but I’ll sing it again,
Of the place that I lived on the wild windy plains,
In the month called April, county called Gray,
And here’s what all of the people there say:

A dust storm hit, an’ it hit like thunder;
It dusted us over, an’ it covered us under;
Blocked out the traffic an’ blocked out the sun,
Straight for home all the people did run,
Singin’:

We talked of the end of the world, and then
We’d sing a song an’ then sing it again.
We’d sit for an hour an’ not say a word,
And then these words would be heard:

Now, the telephone rang, an’ it jumped off the wall,
That was the preacher, a-makin’ his call.
He said, “Kind friend, this may the end;
An’ you got your last chance of salvation of sin!”

The churches was jammed, and the churches was packed,
An’ that dusty old dust storm blowed so black.
Preacher could not read a word of his text,
An’ he folded his specs, an’ he took up collection,
Said:

Strange for that song to be rolling around my head, but we watched a PBS show about old folk singers the other night … and there it sits, in my brain, rolling around and around.

It’s the anthem of my generation. We’ve said goodbye to a lot of folks. Some are gone because they went away to that other place, bought the farm, as it were … but just as many — even more — really did buy the farm, or at least real estate in a community far away where the only crop they grow are old people.

I never wanted to live in an Old Community, though I recognize one doesn’t always have a choice in the matter. I never wanted to live in any community that was all of a type. When I was young and raising my son, I sought out racially diverse communities because I like the grittiness of different cultures mixing together. I wanted my son to know, without being told, that people come in all colors and shapes and there’s no reason to be afraid just because someone doesn’t look like you. It was a very unpopular position to take, but fortunately my husband agreed with me and we found … and lived in … mixed communities the entire time my son was growing up.

It worked. He didn’t — doesn’t — recognize skin color as a descriptor. He could tell me the type of refrigerator the new people in town had in their kitchen and every detail of the cars they drove, but not the color of their skin because for him — and my granddaughter is the same way — it was a matter of gradation. There were no black or white people, just off white, pink, tan and brown people, with a variety of hair textures and colors. Some friendly, some not so much.

Then we lived in Israel and he was one of the few Jewish kids who had Arab friends because no one had told him he shouldn’t, and even though it was dangerous, I wanted him to know that people are people, not the labels we put on them.

Color blind. That’s the word for it. My granddaughter gets mad when someone calls her grandfather “black” because, she says, he’s not black … he’s a nice light to medium tan, depending on the time of year and whether or not he’s been in the sun. As for me, I stay a disgusting shade of fish-belly white no matter what I do and any effort to alter it results in third degree burns, a lot of pain, and turning an unnatural shade of hot pink which may look good on a tee-shirt, but looks alien on human skin.

And all of this somehow reminding me of driving down the highway in Garry’s old flame orange Dodge Challenger. He bought it when he was working at ABC Network in New York in the 1960s. He bought it in 1969, the year my son was born which is relevant because Garry is my son’s godfather. But the car was a 1970 model year. It was the car he brought with him when he became a reporter in Boston in November 1970. 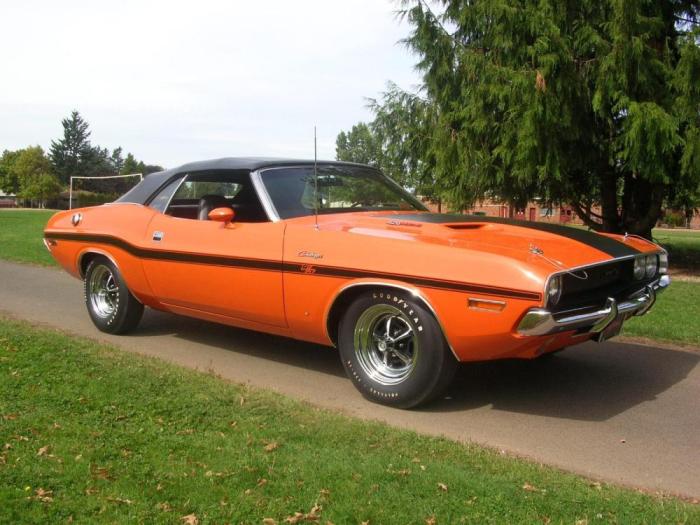 It was his first on the air job. It would be his last, too, because he would work at Channel 7 for 31 years, the remainder of his career. He would drive the orange car until after we were married, until it finally stopped being dependable and wouldn’t drive in the rain because the wires got wet and it would stall. It still drove like, as we say, a bat outta hell because it had a huge engine and Garry took pretty good care of it. Not great because he entrusted its care to a garage that cheated him and he, not knowing enough about the mechanical stuff to realize it, assumed that if it looked okay, it was okay.

We got another convertible after that … a red Mustang and had that for almost a dozen years, but it was getting to the end of the convertible years and they didn’t make them like they used to. They didn’t make us like they used to either, and I needed a car where I didn’t have to wrap myself up like a mummy to keep my hip length hair from turning into a mass of knots  or getting a horrendous sunburn just sitting in the car. Only in TV shampoo commercials do long-haired girls drive in top-down convertibles with their hair blowing free because it’s going to take hours to get that mass of hair untangled later.

And now, it’s time to stop, even though this has rambled from one place to another without any logic to it … Fast writing, stream of time, stream of consciousness. We’ve driven a ways down the highway of memory and time … I wonder if the old orange car is still around? It was a few years ago. It had been restored, I hear and I was glad to know it. I have such fond memories of the old beast. Of all the old things and old people I knew.

We still don’t live in an Old Community, though this community is old in other senses. And I’m glad, though I sure do wish we had more ethnicities among us. Miss the mixing up of color and culture and music and dance … and the wonderful smell of the food everyone cooked on holidays …