The Darwin Elevator by Jason M. Hough – Book 1 of The Dire Earth Cycle 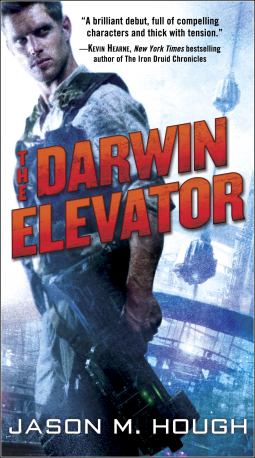 The Darwin Elevator fall into two dystopian categories — post alien and post plague. It’s also a fine, fun piece of science fiction writing. It has great heroes (male and female) and some seriously nasty, bad-ass villains. There’s plenty of action and nary a dull moment.

In brief? The aliens came. They built an elevator in Darwin, Australia that is functionally a ladder to the stars as well as a quick-launch (well, not so quick, but highly economical of energy) pad for space shots.

The setting is late mid-24th century — around 2385 in Darwin, Australia. It’s the last human city. Most of the world’s population died of the plague brought by the aforementioned aliens. No one is quite sure whether the plague was unleashed intentionally or not, but the results of it have been devastating. Any parts of the human population not huddled around the elevator (built by the aliens) in Darwin — an area that confers protection on people under its “umbrella” — are now mindless, savage subhumans. Not zombies. Just very nasty.

Skyler Luiken was born with a natural immunity to the plague. It’s rare, though not unheard of. He and a group of fellow immunes  fly missions to scavenge urgently needed resources to keep Darwin functional. When the Elevator starts to experience frequent — unprecedented — power outages, Skyler and his intrepid crew, as well as the young and beautiful scientist, Dr. Tania Sharma are tasked to solve the mystery and repair the elevator. If the elevator fails, that’s the end of humanity. Doom.

This is the first book of a trilogy. The second and third parts are due out in mid August and early September. This is good insofar as you don’t have a long wait for the rest of the story. Bad, insofar as you know the good guy — Skyler — is going to make it, no matter how dubious his situation looks because, well, he’s the hero and there are two more books scheduled for publication. I don’t have a problem with this since I read a lot of series, trilogies, duologies and frankly, I prefer knowing the hero is going to survive. I’m not good with high level literary stress.

Although this certainly falls into the dystopian postapocalyptic science fiction designation, it isn’t quite like anything else I’ve read. The elevator — the entire concept — is interesting and unique. There are hints that there’s a lot more to this technology than mere technology. It’s not just power and gears and engineering specs. There’s something more going on, but we aren’t going to find out what that is quite yet.

I enjoyed the book from the first page. Sometimes, when you start a book, you just know it’s going to be a good one. This is a good one. Real science fiction, well written, nice and tight and tense. And based on an interesting premise. As sci fi goes, that’s pretty much what you need. It’s available on Kindle and paperback.

I highly recommend it. I can promise a good, not boring read that will make you absolutely want to read the next installment — The Exodus Tower — scheduled for release August 27th.

Tomorrow, you can read my review of The Exodus Tower. You can pre-order it through Amazon and probably elsewhere, too.

One thought on “Dystopia with a twist – The Darwin Elevator by Jason M. Hough”