A CURIOUS ACCOUNT OF NATIVE PEOPLES IN NORTH AMERICA 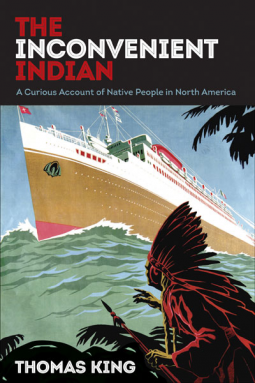 Before starting it, I was a bit dubious about the book. The title seemed just a bit … I don’t know. Off-center? I wasn’t sure if I was about to read history, anecdotes, opinion, humor or what.

It turned out to be all of the above and more. This is an entertaining book — humorous, elegantly written and witty. It’s also serious, but the seriousness is somewhat cloaked by its style. Unlike so many books written by oppressed minorities that aim — almost exclusively — to make one feel guilty for not being one of the oppressed, this book helps you help see the world through the eyes of Native Americans. What we see is beauty, horror and hilarity … a mad world in which you can’t trust anyone and you have to make your own rules because that’s the only way to survive.

We have slaughtered our Native Americans. Hated them, admired, adulated, tortured, enslaved, jailed and utterly misunderstood them since our first encounters.

The single thing we non-Natives have never done is accept the Native American claim to this country as more legitimate than ours. At the core of the relationship between Native peoples and the white “settlers” was and will always be land. It was theirs. We wanted it. We took it. They objected. We killed them. And we kept the land and tried improve our position by slander and slaughter.

These days, feelings towards Native American runs the gamut from awe, to bigotry and loathing. Despite the passing of centuries, there is little understanding. That the Native community is less than eager to let outsiders into their world should surprise no one. Their experience with us has not been reassuring. To quote Calvera from The Magnificent Seven: “Generosity. That was our first mistake.”

For anyone interested in discovering the meaning of cognitive dissonance, growing up Native in today’s America is a good start. Natives are by no means the only minority to have to hold completely incompatible world views simultaneously, but Natives have a legitimate claim to first place for the most cock-eyed and complex relationship with the larger society in which they must live.

This isn’t exactly history. It isn’t exactly not. It’s stories, history, opinions and anecdotes presented in a non-linear, almost conversational style. It is easy to read, lively and not at all pretentious. It shouldn’t surprise anyone, but probably will. Logic would dictate that our Native population regard us with at the very least, skepticism and possibly deep-rooted hostility.

This isn’t a deep analysis of the history of this relationship, though for some I suppose it would be revelatory. I would call it “Native American History Lite.” It is a good starting place for those who don’t know anything — or know a lot of things, all of which are wrong.

Thomas King is an award-winning novelist, short story writer, scriptwriter, and photographer. His many books include the novels Medicine River; Green Grass, Running Water; Truth and Bright Water; two short story collections, One Good Story, That One (Minnesota, 2013) and A Short History of Indians in Canada (Minnesota, 2013); nonfiction, The Truth About Stories (Minnesota, 2005); and the children’s books A Coyote Columbus Story, Coyote Sings to the Moon, Coyote’s New Suit, and A Coyote Solstice Tale. King edited the literary anthology All My Relations and wrote and starred in the popular CBC radio series, The Dead Dog Café. He is the recipient of a Lifetime Achievement Award from the Western American Literary Association (2004) and an Aboriginal Achievement Award (2003), and was made a member of the Order of Canada in 2004. He has taught Native literature and history and creative writing at the University of Lethbridge, the University of Minnesota, and the University of Guelph and is now retired and lives in Guelph, Ontario.

The Inconvenient Indian is available in Kindle, Hardcover and Paperback and worthwhile in any format.