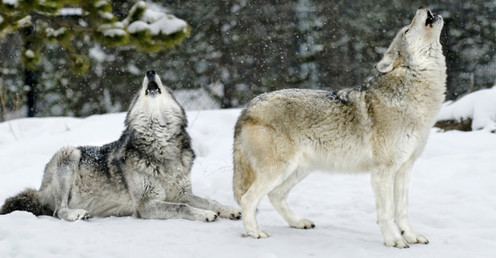 I wish that I could wave a magic wand and make the world a kinder place for animals; cats, dogs, cows, pigs, sheep, horses, whales, dolphins, elephants, animals used in laboratory experiments — you get the picture, right?

Animals should have legal rights — they should be better protected and defended.

Everyone has issues they’re passionate about, and this is one of mine.

No animal needs our help more than wolves.

My tugboat man and I drove up to Sacramento so that I could testify at the Fish and Wildlife Service‘s wolf delisting hearing on November 22. He was there to make sure that I stayed out of jail. It’s kind of a joke but not really. Being around hunters and others who enjoy killing animals makes me so mad that you can almost see me explode with RAGE. The smoke-out-of-the-ears kind of rage. The kind of rage that has no filter. THAT kind of rage.

I’m sure that I’m one of the most skeptical people in the world when it comes to the reasons why our government is motivated to do ANYTHING, but this particular issue boggles my mind to a crazy degree.

This horrible and scientifically flawed idea that wolves are in a position to have recovered enough numbers to be formally removed from the Endangered Species List is what has driven thousands of Americans to protest, speak out, argue against it, and do whatever they can to continue to protect these beautiful creatures from certain extinction — again.

A hunter who kills a wolf belongs to a subsection — a microcosm —  of a human being whose sole purpose in life is the extermination of a species.

From what I understand, funded in part by the Koch Brothers’ smoke screen organization, American Prosperity Group, ranchers and hunters have declared an all-out war against the wolf — any wolf, Gray Wolf, Red Wolf or Mexican Wolf, coyotes, any and all predators that they incorrectly believe threaten THEIR skewed right to breed, grow, and eventually murder their own cattle and sheep.

Current research indicates other successful non-lethal options to protect their “investment” animals — living and breathing creatures whose sole existence is to breed and grow to one day be killed — yet another reason why we don’t eat meat.

What this potential delisting has helped to unleash is a group of sadistic hunters who are entrenched in zoosadism.

Zoosadism is a term used to refer to the pleasure that an individual gains from the cruelty to animals. SEXUAL PLEASURE. Zoosadism is getting sexually excited by causing harm to animals and is considered a form of animal abuse. Have you seen all those horrible photos on the internet? Zoosadists are true sociopaths.

At the hearing, one of the first speakers was Chief Caleen Sisk of the Winnemem WintuTribe of American Indians near Mount Shasta. She received much deserved applause and shouts of support when she said that the wolf had long been a spiritual figure for her tribe.

“The wolf is our teacher,” she said, explaining that its extended pack relationships served as an example for human families. She compared the hunting of wolves out of fear to the killing of American Indians.

There were so many amazing speakers who spoke with intelligence, passion, dedication, and concern for the wolf.

WIth 500-600 attendees, and the knowledge that there was a videographer who recorded all the speeches as official government testimony, you’d think I would have been nervous, but I’ve always had plenty of public speaking confidence (some might call it chutzpah,) — especially with five-inch heels and a Chanel on my arm.

“It is past time to take the words of Gandhi to heart: “The greatness of a nation and its moral progress can be judged by the way its animals are treated.”

Why is the term “delisting” synonymous with hunting, blood sport, and the murder of a species?

Is this the only barbaric method “good science” has for “species management”?

Instead, let’s call it what it really is: government sanctioned murder.

We cannot allow the current administration to give up on wolf recovery for the gray wolf OR the Mexican wolf or relinquish species survival to the states.

I’m from here in California where we have excellent habitat but no wolves and I absolutely do NOT support any (Fish and Wildlife Service’s) proposal to delist the gray wolf, a barely recovering endangered species that’s currently being slaughtered for political gain.

We need to manage wolves and other wildlife in a healthy and sustainable way so that future generations can enjoy the benefits of our rich wildlife heritage. However, management cannot mean the hunting and murder of a species.

That the irrational and enduring hostility to wolves still exists, and that hundreds of more wolves will be killed — is wrong and the cruel methods allowed for hunting and trapping wolves are deeply disturbing and sociopathic, egregious, and inhumane.

Our own life changing visit to Yellowstone in August fulfilled my     dream to see the wolves of Lamar Valley.

At 6:00 a.m., a few miles outside our camp at Slough Creek, we followed others to a bison carcass, and our efforts paid off with a multiple sighting of many wolves, including 755.

There was an overwhelming sense of awe among the dozens of us who silently watched him cross the road and then a collective sigh of relief when he disappeared safely over the ridge.

Those same wolves are being murdered the instant they cross that invisible border out of the park. It’s absolutely insane.

WE hold the power to ensure that we’re not the last generation to view a wolf in nature; not confined in a zoo, or most importantly, not dead after being tortured and then displayed as a “trophy”.

The truth is that wolf recovery is far from over.

According to many leading scientists, we’ve entered into an era of mass extinction, which will not have run its course until biodiversity levels are less than twenty-five percent of what they are now.

I’m here to push back against this culture of extinction.

I’m here because of the legacy I want to leave behind for our children.

More than thirty years ago, I did my small part to advocate for the addition of wolves to the Endangered Species List.

I wrote letters and joined forces with groups dedicated to protecting the wolf from certain extinction and it’s shameful that we’re back to the beginning.

It appears that the last thirty years have culminated in the nurturing of this species’ growth for the single sacrificial purpose to provide animals for thrill killing hunter/murderers and that’s why continued protection is even more necessary.

Our collective legacy will not be celebrating wolf recovery, but rather their unnecessary deaths will become your ONLY legacy.

Do NOT delist the gray wolf. Outlaw all hunting of wolves.”

Cleveland Amory: “Hunters should be hunted themselves, to prevent hunter overpopulation and to undo the effects of inbreeding.”

Destroying wolves is one of so many things we are destroying. We need to stop killing our world one species at a time. There is a reason the animals were created before humans. They deserve a piece of nature, to be safe, to live, love, breed and hunt as they were meant to. Please – We are not owners of the earth. We are just residents, no more or less than the wolves and whales and eagles. And trees. We have no right to destroy it all and we will pay dearly for it.

Please visit Enchanted Seashell at http://enchantedseashells.com/2013/11/26/saving-wolves/ for the entire story.