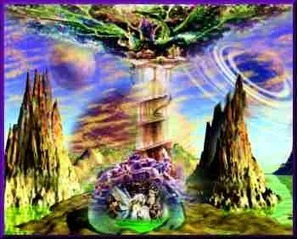 It is a common misperception that the Celts had an Underworld, a place of the dead. The fact is that the Celts believed in reincarnation, and that the time between lives was spent in the unpleasant Tech Duin. Those gods normally associated with the Underworld are nothing of the sort, nothing more than misperceptions based on our own views of the world. For instance, Pwyll of the Mabinogion seems to be no more than a king who travels from one world to the next. Manawydan, a Welsh god, is the eponym for part of Lothian and the island of Man. He is more closely related to the sea than the dead.

The confusion is due to Celtic mythology’s complexity. The mythologies of Greece, Rome, and the Norse as they have come down to us have been simplified and systematized by the likes of Bulfinch and Snorri Sturlsson. The Celts had no one like that. As a result their mythology is more difficult to follow and often inconsistent. Irish myth held that their gods were only the second most recent of five invasions by supernatural beings, the Tuatha de Danaan. These beings had residences similar to the gods of other mythologies, on mountains, in the sea, and what not.

But the enemies of the Tuatha de Danaan responded differently. In Norse myth, the enemies of the gods were still active and needed to be constantly subdued. In Greek myth, the Titans were brought to Tartarus once they were beaten. The Irish believed that once defeated, the Tuatha de Danaan’s foes hid using their magic. Their sanctuaries were apart from the world the Celts knew, magical and hidden. It was these Other Worlds to which heroes often went, the realms of fairies and the other creatures of myth.

Because they were places of hiding, it comes as no surprise that the Otherworld had so many geographical locations. For the Celts they were the hills of the countryside, the islands to the west, and the darkest places in the forest. To get an idea of what the Celts imagined, think of a Guillermo del Toro movie such as Hellboy II or Pan’s Labyrinth. These mysterious, magical people lived in magical places that confounded the Celt’s concepts of space.

In the British Isles there dwelled leprechauns, fairies, elves, and dozens of other perfectly civilized beings of shrunken size. These all lived in worlds other than those humans could see. None of their worlds are actually named, so it’s impossible to know if they all lived in the same Otherworld or different ones.

What I find fascinating is the make-up of the world or worlds themselves. The older stories about them always had rulers who gave opulent feasts and royal entertainment for guests that far outdid anything to be found in the human world. But what I’ve found interesting are the occasional hints at magic/superior technology. A mist conceals the entrance through which no human can see, occasionally a glass boat takes the knight there. Time moves at an accelerated pace. Fairies can fly. Otherwise there is the distinctive feel of something well beyond human abilities or technology, though nothing specific is said. For the Celts these were superior beings not to be trifled with in our world. To go into theirs was to court disaster.

I want magic to be real. There is a deep, irrational well of longing in me that believes in magical places buried in woodland and mist. This is my favorite blog, my favorite website. It lets me feel close to the magic.