Not Los Angeles. Nor old movie stars full of Botox to make them “look younger” (really makes them look like corpses, but I digress). It could be a metaphor of that West Coast city and many of its inhabitants.

I’m talking about My World. A small, form-fitting world populated by beautifully dressed, if slightly dusty hard plastic people. Mostly girls, a few men and boys. The girls are my favorites because they take me back in time and spirit as effectively as any wormhole in the fabric of time. When I hold one of my dolls, I’m young again …and it is a time and place when my best friends were dolls.

You must not blame the girls for their plasticity. They are not plastic by choice, after all. I wonder, had they been given their druthers, if they would have preferred living flesh. I don’t know. As it is, they have stayed young long after time would have ravaged their beauty. You never know. So many “real” people choose to emulate my plastic pals, perhaps they are the model for women of the future as the world drifts to them. They become iconic images of past and future.

I have an awful lot of dolls. When I start taking pictures of them, I inevitably find myself concentrating on those I can most easily access, the dolls on easy-to-reach shelves. Others are high above my head, often crowded together and difficult to photograph in situ.

My collection is mostly hard plastic dolls from the 1950s. Some are from the 1960s and a very few from later, the early 1970s. I also have quite a few older composition dolls. These were made of sawdust, glue and paint and typically come from the 1930s and early 1940s.

It’s interesting to see how the concept of dolls changes through the decades. It’s a reflection of how girls and childhood are viewed by society as a whole. From the grownup, almost motherly dolls of the teens and twenties, to all the pretty long-haired girl dolls who dominated the industry from the 1940s through the early 1960s — you can tell what people thought of girls by the dolls with which they played. 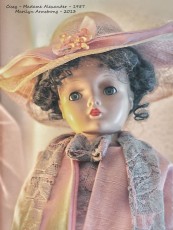 Miss Cissy in an original pink mix and match outfit! 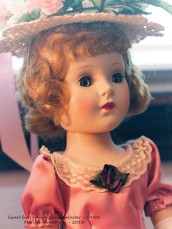 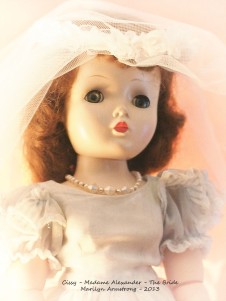 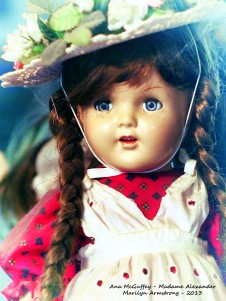 Suddenly, in the mid 1960s, dolls looked either as if they’d taken bad acid or became fashion dolls resembling Hollywood stars. The dolls industry has always been in love with Hollywood, of course. Shirley Temple, Margaret O’Brien, Sonja Henie were just a few of many dolls based on movie stars. Book characters have been a long time favorites too as well as historical characters. Today’s American Girl dolls come with books of their own and the tradition continues.

The trend to fashion dolls moved from Hollywood to the ubiquitous Barbie … probably the longest lasting fad in doll history. I don’t understand it having never liked Barbie. Maybe it’s an age thing. By the time Barbie appeared, my doll-playing days were over and my collecting days were long in the future.

Today’s dolls range from very weird to traditional, soft-bodied girl dolls. Despite endless attempts to turn dolls electronic, dolls have stubbornly resisted. They have remained toys requiring imagination, not batteries. Everything else appears to have fallen to some version of computerization, but dolls are still silent little plastic people to whom little girls can talk when no one else will listen.

Are they spooky, my silent friends? Not to me. To me they are merely peaceful and quiet, lacking any mechanism for speech. Yet they are also eloquent. They watch. They see. All the decades through which they have survived are captured in their oddly expressive glass eyes. Their sweet, sometimes sad smiles.

Do dolls covet and yearn? I think they want only to be cuddled by some little girl. A little girl enchanted by having finally found a friend who listens and never interrupts.

And will in stillness dwell.