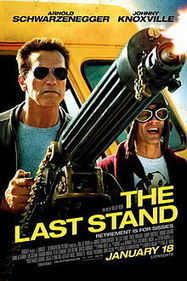 Starring Arnold Schwarzenegger, Forest Whitaker, Johnny Knoxville, Rodrigo Santoro. Jaimie Alexander and lots of other people, this is absolutely the best movie ever made by a former governor of California. Or any former governor.

I’m not a very intellectual movie reviewer. That’s just as well, since there is nothing intellectual about this movie.

It’s pretty good. Lots of shooting. Blood spurting. Vicious bad guys. It has the grace to not take itself too seriously, with enough humorous moments and entirely predictable but nonetheless funny lines to make it easy to watch.

“I’m The Sheriff!” growls Arnold and by golly, he is, though Garry and I simultaneously pointed out that he used to be The Governor.

There are a lot of car chases … or maybe not really chases. More accurately, it is exceptionally good stunt driving. They actually did some stunts I’ve never seen before and I really thought I’d seen them all.

Plot? Oh, right. Plot. Okay. Think “High Noon” with a strong whiff of “Terminator.” Or any western movie where the sheriff stands up to some incredibly evil guys and whups their collective asses with the help of his faithful deputies and one old lady with a shot-gun. You’ll be glad to know that Arnold Schwarzenegger, senior citizen, ex-governor gets shot, stabbed and beat up, but walks away proudly in the end. Not into the sunset, but into the local diner. Irv’s Diner. Killing people and catching malevolent drug lords gives him an appetite. I’m just sorry I forgot to buy popcorn. It’s a beautiful, deeply touching, moment.

If you need a violence fix, this is a pretty good choice. It’s well made. Moves right along. Some great artillery and the aforementioned stunt driving.

It’s going to be “one of those days” for little old Serendipity. Today I pass the 150,000 hit mark and I’m not at all sure what that proves, if anything. I missed the day when my blog followers (not counting followers through other channels) topped 3000 … I think I was busy being sliced and diced. Something like that.

It’s also my son’s 45th birthday. Aside from any other sentiment … how did I get old enough to have a middle-aged son? I remember one day I was sitting with my mom and she looked at me … got this weird look on her face … and said: “You’re going grey!”

“Yes,” I admitted. “I’ve been going grey for quite a while.”

“But,” she said, “You’re my daughter.” She looked sort of stunned and I didn’t understand, but I do now. I have a giant son. Tall and big, going grey and bald and looking so much like his father sometimes it catches me unawares and spins my brain around like clothing in a dry cycle.

It’s also the day the leaves are finally going to pop. I can see it from my window. Green fuzziness atop the maples. Spring is finally — about a month and a half late — springing forth. I think it may be too late for a lot of the flowers, but maybe not. I hope not. We don’t get a big spring around here, but however brief, it is the showiest time for flowering trees and spring blooms.

I’m in favor of all seasons. When I was living in Israel, more than anything else, I missed seasons. Autumn especially, but also the rhythm the seasons make. When you grow up in a 4-season world, you body synchronizes itself to the seasons and it make the passage of time orderly. It feels right.

So, here we are, still on Serendipity. Garry and I need to get out today with a couple of cameras. I’m not up to anything strenuous, but we both need an airing, me especially. We are in the grip of cabin fever and only a trip into the world will help.

And happy birthday, son! The torch is definite in the hands of your generation now.

We live in a woods and everywhere, there are trees. Right now, the leaves are still hiding, but ordinarily, leaves are everywhere. They drift on the wind, pile up and turn to mulch in the gardens and on the deck.

Mist in a January woods

They are golden and fresh in springtime, deep green in the summer, glorious in autumn and become brown and crunchy as winter approaches.

The Owl and the Pussycat

Reeds on the river

Reeds and water plants reflect in quiet water along the river in the center of town.

Leaves and reeds along the riverbank.