A SOLSTICE STREAM OF CONSCIOUSNESS

Set for Solstice – Today’s Summer Solstice, the longest day of the year (in the Northern Hemisphere). How are you taking advantage of the extra hours of light this time of year? Do you like it, or do you already miss earlier sunsets?

I finally crawled out of bed this morning … an hour ago? Yeah, that’s about it. I noticed it was bright (not before coffee!) and cool (thank you!). After I scrubbed my teeth and limped to the kitchen, greeting each dog as I made my way past the big biscuit canister to the coffee machine to press “start” lest I not have coffee. Without coffee, I don’t care if this is the final day before Armageddon, I’m not ready!

The pig-chicken-cow antique canister where I store the Greenies

Summer Solstice. What do you know? Time just crept up from behind and whacked me on the head. Last I knew, it was the Vernal Equinox and I was on a gurney rolling into the operating room where they were sharpening their scalpels for me.

And look! The world moved a quarter way around Old Sol and it’s summer. Already. I should rip my clothing off and go dance under the moon tonight to honor Mother. I’d probably get munched on by millions of flying jaws who want my blood. Maybe that’s their own tiny way of honoring Herself.

Anyway, a naked me in any light might scare the wild creatures so much they’d move to another part of the forest. It might even scare me half to death. It’s not pretty. Mother Gaea wouldn’t mind, though. She’s entirely open-minded. Just mark me “crone” and move on. 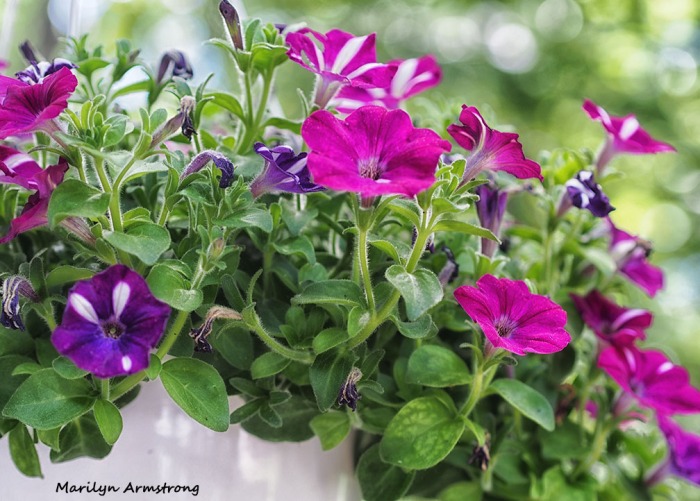 Petunias on the morning of the Summer Solstice

It is a beautiful day. Couldn’t ask for a nicer one. This kind of perfection is rare in these latitudes. When the still sleeping husband arises from his dreams, maybe we can talk about an itty bitty excursion to one of the many waterways. With photographic intent. Perhaps fit in a little dinner afterwards at a favorite Asian eatery. I like that plan.

Of course, it’s just my plan and I’m half a pair of oldies. It wouldn’t be fun without the other half. Strange how closely connected we are. Much closer than when we were when younger and working separate jobs, going separate ways.

I guess that’s what happens in retirement. You get very close or pull apart. I know a lot of old couples who discover on retirement they can’t stand each other. A bit late to make that discovery, I should think. Not like you’re going to rebuild your world at this late date. And who would want to? Of course, we don’t always have a choice in the matter but I refuse to think about that.

My getting old is barely acceptable, but Garry is forever young to me. The world is always young too. Bright green leaves, flowers, waterways — they all constantly renew their youth. That’s amazing, isn’t it? If only we earth-bound creatures could do the same.

I’ll ask The Mother if she might make an exception while I do that naked dance under the moon.