DRAWING AND QUARTERING – MY FAVORITE NIGHTMARE

For your Daily Downer, WordPress is offering up a peach. You’re having a nightmare, and have to choose between three doors. Pick one, and tell us about what you find on the other side. What a great prompt. I haven’t had any juicy nightmares recently. Just obnoxious, worrisome, nagging unpleasant dreams. Not real nightmares.

Lacking a juicy nightmare of my own, I thought we might take a little trip to Merry Olde England. This should give everyone nightmares and have you running for any door. Even the one which leads into the dark tunnel.

Acts I and II

The following information was gathered with the assistance of the Encyclopædia Britannica. You can find additional details, if this isn’t enough, in (where else?) Wikipedia.

The show’s finale often took several days. Its most important feature was that the star of the show had to be alive to fully participate in the event. He or she would be brought near death many times, then revived.

Ordained in England in 1283 for the crime of treason, this form of “execution” remained on the books — entirely legal — until 1867.

The full punishment for a traitor included a variety of creative mini-executions, none of which ended in death. First, Mr. Traitor was drawn. Which meant he was tied to a horse and dragged to the gallows. It was probably some kind of sledge. The History of English Law Before the Time of Edward I (2nd ed., 1898; reissued 1996) indicates it was a way to deliver the live body to the hangman.

The remainder of the punishment left the executioner with a few choices, based on what he thought the crowd would most enjoy, would cause the most agony without actually killing the object of his attentions, or both. These choices included hanging (not to the death) and/or live disembowelment and burning of the entrails (while the subject watched). 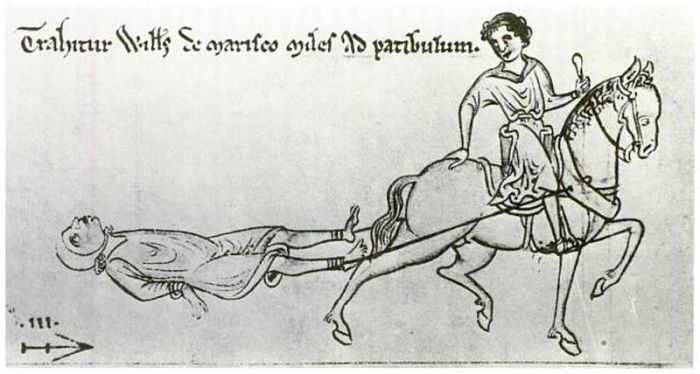 For the finale, you could take your choice of quartering — by tying each limb to a different horse and spurring them in different directions. Or, if that was impractical (not enough horses? insufficient room?), there was always a final beheading. Anyone who thinks the British are not a creative people, this should dispel that myth.

As for escaping the nightmare through one of 3 doors? I don’t think so. Just one door leading to a black-robed dude carrying a scythe. He will welcome you. At that point, Death looks like Mother Mercy.

I’m not making this up.

The first sentence of drawing and quartering was inflicted in 1283 on the Welsh prince David ap Gruffudd, whose punishment for myriad crimes included being drawn for treason, hanged for homicide, disemboweled for sacrilege, then beheaded and quartered for plotting the king’s death.

In 1803 Edward Marcus Despard and six accomplices were drawn, hanged, and quartered for conspiring to assassinate George III. And finally, the sentence was last passed (but not carried out) on two Irish Fenians in 1867.

Are we having nightmares yet? Great! My job here is finished. Have a great day!