I have a little shadow that goes in and out with me,
And what can be the use of him is more than I can see.
He is very, very like me from the heels up to the head;
And I see him jump before me, when I jump into my bed.

The funniest thing about him is the way he likes to grow—
Not at all like proper children, which is always very slow;
For he sometimes shoots up taller like an india-rubber ball,
And he sometimes gets so little that there’s none of him at all.

He hasn’t got a notion of how children ought to play,
And can only make a fool of me in every sort of way.
He stays so close beside me, he’s a coward you can see;
I’d think shame to stick to nursie as that shadow sticks to me!

One morning, very early, before the sun was up,
I rose and found the shining dew on every buttercup;
But my lazy little shadow, like an arrant sleepy-head,
Had stayed at home behind me and was fast asleep in bed.

I hesitated before I entered this challenge. I don’t remember “the rules” well. I never properly learned them. I never went to photography school or even took a course. I got a camera from a friend, looked at pictures I liked, figured out what I liked, then did my best to emulate them.

Alfred Eisenstadt, who I had the very good fortune to actually get to know at the very end of his long life, was a big influence. My first role of film, I literally tried to duplicate his landscapes of Martha’s Vineyard. In a few cases, I succeeded. I learned an enormous amount that way … but not any rules. Just what works. And what doesn’t.

Therefore, I’m not always sure on what rule is being demonstrated by my pictures. I sincerely regret not being good at the terminology. That being said … and I feel better already because confession is so good for the soul … 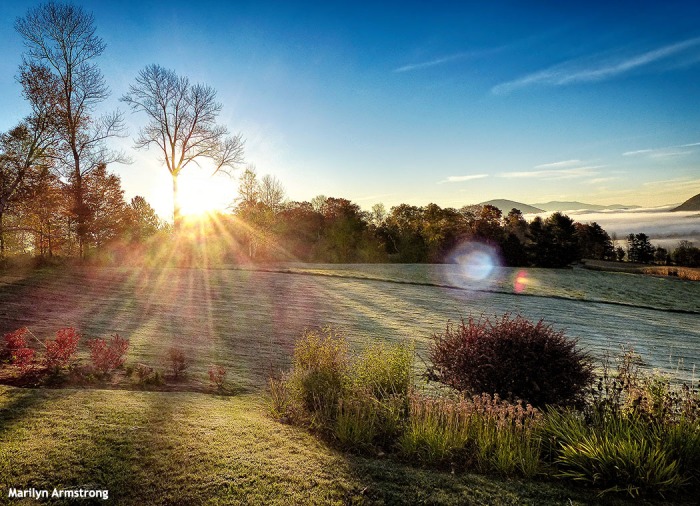 This probably falls into the rule of thirds. The off-center sun rising over the hill. The chromatic aberration also makes this a more interesting shot than it would otherwise be.

The strong diagonal is the most important element of this picture. Pictures like this need something to make them “move.” Lacking an object I could work with in the foreground, I settled for the angle of the path along the canal and the geometric forms created by the reflections.

The photograph is about the wires. Some photographers would go very far out of their way to erase them from the photograph. I use wires. They form diagonals in an otherwise flat photograph. In this case, they give perspective to the mountains and sky. They are a strong diagonal — in black and white (this picture didn’t work very well in color) — and also tell a story. 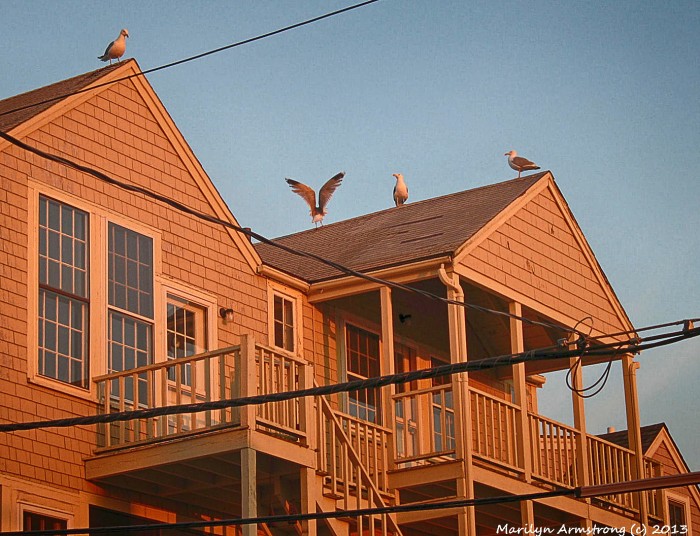 This sunrise at the harbor in Rockport, Massachusetts, was the first time I consciously included wires as part of the picture. I think they give the photograph definition and movement. The seagulls help too. The color of the house is a reflection of the sunrise …

The sunrise reflected red over the house at the dock side of the harbor. This was a spectacular sunrise. I was very lucky because getting up really early to shoot a sunrise doesn’t always yield such amazing results. I’m not sure what rules apply to this picture. Probably more than one. What made the picture work is that I could see that if I waited, the rising sun would intersect with the cloud. Probably the most important part was being there. With a camera. 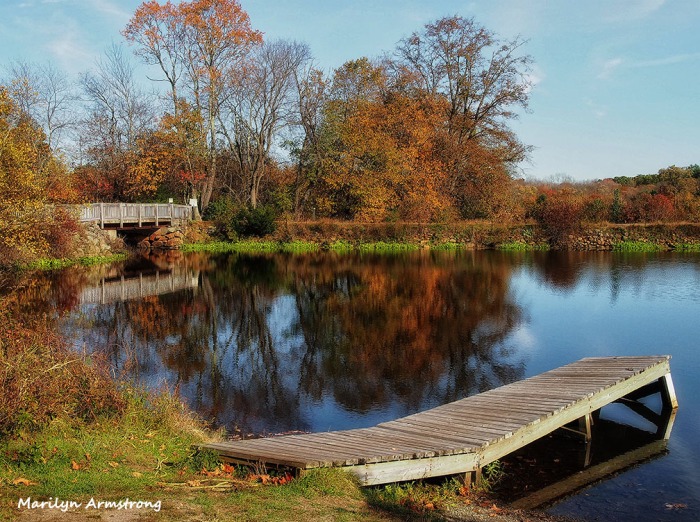 It isn’t spectacular, but this picture, to me, say “home.” October. Brilliant leaves mirrored by the smooth waters. A strong diagonal from the little dock and some interesting business on the left where the bridge crosses the Blackstone. 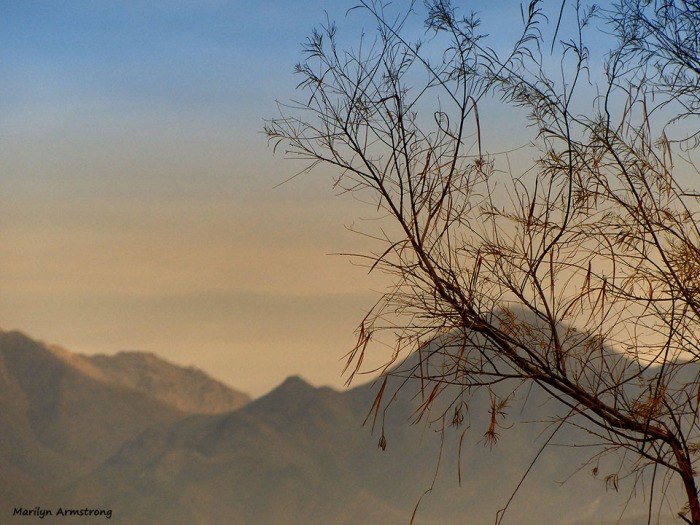 Using the ironwood tree in the foreground to give perspective to the mountains beyond.

It wouldn’t be much of a picture if it weren’t for that truck. Ambling it’s lonely way down the road towards the mountains in Maine. Slowly. Drivers in Maine have just two speeds: lunatic fast OR very slow. We were mostly behind the slow ones, but sometimes got passed by the crazy speed demons. 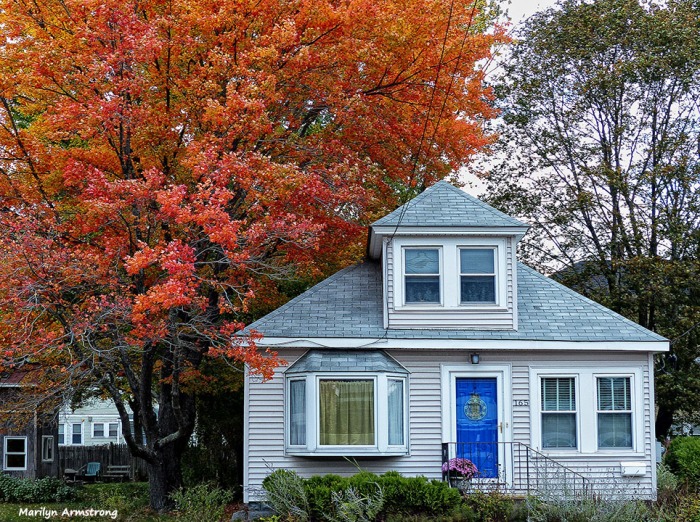 It’s all about the color and the contrast. The house and tree are both focal points, though I think if is a contest, the tree wins. Because it’s red. I shoot a picture or a dozen of this tree every year. It never fails me. Sugar maples are the showgirls of New England’s autumn.

I was driving along I-95 in Connecticut when I spotted the billboard for “Direct Cremation”. 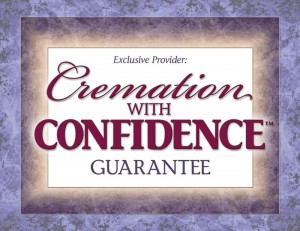 Traffic was just slow enough for me to read a few lines of the pitch. It promised no fuss, no delays, no middle men, red tape … and a money back guarantee if unhappy with service. I wasn’t sure who’d get the money back.

I started laughing over Marty Robbins and “El Paso” playing on the oldies CD. I was still laughing when Marty’s gunfighter died in the arms of his young sweetheart. Instead of a tearful funeral and the strains of “Streets of Laredo,” maybe the gunfighter should have had a direct cremation. No muss, no fuss, no mournful boot hill goodbye.

Direct cremation may be the latest answer to a world of violence. Mob hits, drive by killings, gang bang slayings with collateral damage. Stressed out serial killers and contract button men doing “jobs.” The bodies just keep piling up. Medical Examiners are overworked and cemeteries are running out of room. The U.S. government, in its infinite wisdom, only give each citizen a whopping $242 per body.

Speaking of overworked medical examiners, I’m reminded of a story I covered in Boston.

Goes back 40 plus years. The county medical examiner was, if you’ll excuse me, “under the gun” with some of his findings. He didn’t look like Quincy, Ducky, or even the sexy Lacey from the “Castle” series. He was a sad, tired, bleary-eyed man in the autumn of his years.

Your intrepid reporter was on the scene. The M.E. was momentarily diverted so I could check the autopsy lab and the morgue. I found the controversial corpse and made a cursory examination. I confronted the M.E. about his findings on the case. He insisted the victim was stabbed to death. I asked him about the several large bullet holes I’d just found. He was speechless.

Direct cremation would have avoided a lot of controversy and embarrassing questions. It’s an idea whose time has come.