We are in the midst of what feels like a life-and-death struggle to survive an alien invasion. Today marks the ninth day of the siege. It feels longer.

Anyone who has ever been seriously ill, or recuperating from major surgery, knows the feeling. The early worst agony passes. You’re too sick to do anything much, but well enough to be fed up with being sick. Bored by pain, weary of being off your feet. The sound of your own complaining is aggravating. You feel like “this movie needs a good editing!” except it’s real life and doesn’t work that way. 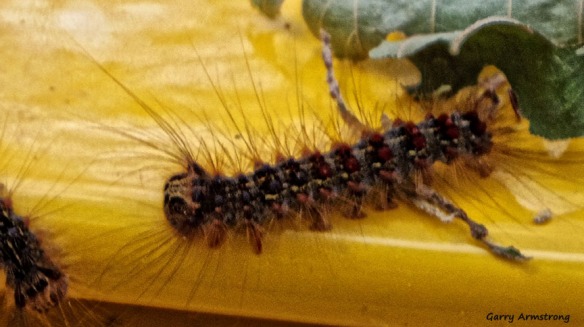 The day is beautiful, the sky brilliant blue. It’s gorgeous as a backdrop for the bare limbs of tall oaks. I’ve gotten (almost) used to the look of naked trees in June. The catalpa and sassafras have leaves because they are least favorite trees for the caterpillars. The forsythia are safe for the same reason, at least for now. The hairy caterpillars have not yet eaten all the maples. No doubt they’ll get to them. Soon.

Life’s a struggle. We struggle to be born. We struggle to grow up, to make a life, a difference. To find meaning. Struggling to survive an alien caterpillar invasion was never on my list of likely scenarios. Call me crazy, but of all the things I imagined might one day happen to me, this never even made the bottom of the list. Insect invasions were the stuff of John Steinbeck novels and Egyptian plagues.

People have commented that they could never cope with this. That’s pretty much what I would have said had this been happening to someone else and me merely reading about it.

So I’m here to tell you that when you have no choice, you cope. You manage. What else can you do? Lay on the floor and try to die? Go live somewhere else? Where? Maybe if you’re young enough with still living parents, you can go back to mom for a while … but at our age, we are where the kids come when all else fails.

Whatever struggle is involved, we deal with it to the best of our ability. That’s life for you. As I gaze out my picture window I see the swaying naked oak trees, the remaining leafy branches of catalpa and sassafras trees. I see a robin chowing down on caterpillars. It’s a banquet year for local birds who eat the caterpillars. I expect to see fat robins and juncos. It’s their movable (moving) feast.

I also see caterpillars creeping up the glass and along the sills. If I look up, the eaves are covered with them. As is the foundation of the house and the driveway, the deck, and lawn furniture.

One of these weeks, these millions of caterpillars will become millions of moths. Who will lay mega-millions of eggs. Something to which we can all look forward, eh?

It’s Tuesday again. Surely a super Tuesday because this year, all Tuesdays have been super. To honor the day, I’m rerunning my favorite yet still relevant political post by Mr. Thomas Curley, News Guy Supreme and Chief Editorial Satirist at Serendipity.

Ellin and I were on a brief ski trip last April and were away for a couple of weeks ago in Vermont. We learned three things.

We were on our trip on a Tuesday. One of the Super Tuesdays. I forget which one because they’re all Super now. We’re both fascinated by this incredibly bizarre presidential campaign, so of course we were watching …

House of Cards on Netflix. We love that show.

In between binge watching episode after episode, we’d check in on the (real) election coverage. And that’s when I noticed that on House of Cards, the characters are constantly on CNN with Wolf Blitzer, on MSNBC’s Morning Joe, CBS This Morning, and so on. All this stuff is shot on the actual news sets with real people playing themselves — while reporting on a fictional presidential campaign.

I’m not going to reveal any spoilers, but this season’s episodes were filmed way before the actual election began. Despite this, the show (House of Cards) contains a lot of surprisingly prescient plot lines.

We sat there watching CNN, MSNBC, CBS and all the other news shows interview and talk with Frank Underwood as he brilliantly manipulates the government and the world to get whatever he wants.

Then we’d change the channel to watch CNN, MSNBC, CBS and all the other news shows talk — with Donald Trump — where they were debating whether or not Trump has a large penis.

Then, a bunch of pundits complained this (real) campaign is nothing more than a bad reality show. They are correct. The Republicans are currently trying to throw their leading candidate off the island, but inextricably, he keeps winning the immunity idol.

The other questions everyone keeps asking is “How did a reality show star end up running for President?”

Good question. But I know the answer. 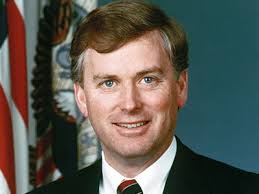 You remember Dan Quayle, the guy who was George Bush Senior’s Vice President, don’t you? Dan had a reputation for not being the sharpest pencil in the box.

He was famous for misspelling potato as “potatoe” at a campaign stop at an elementary school in 1992. 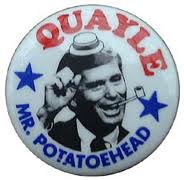 Most people have forgotten the other important thing he did.

He started a fight with Murphy Brown. 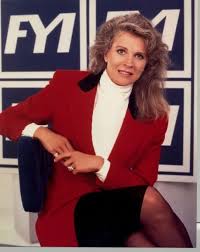 Murphy Brown was the fictional TV journalist and anchor. Played by Candice Bergen, she headed the cast in a 90’s sitcom about a fictional news show called FYI.

In one of the late seasons, she got pregnant and was going to be a single mother. Quayle gave a campaign speech (real) calling her out as being against “Family Values” because she didn’t have a husband. Murphy Brown was “mocking the importance of fathers” (an actual quote from Quayle’s speech).

Here’s where it got brilliant. The producers and writers of the show didn’t put out a statement denouncing his speech. They had Murphy Brown go after Quayle on the television show. It made front page headlines (real) all across the country.

So, now you had Dan Quayle fighting with — and being mocked by — a fictional character on a fictional show. And he fought back. In real life.

Pretty much nobody said “Has anyone noticed the Vice President of the United States is fighting with A FICTIONAL TV CHARACTER ????”

No one appeared to notice. Or care.

And a bad reality host running for President of the United States.

In the real world.

At least I think it’s the real world. I’m not sure anymore. I used to have to take drugs to get this confused. Personally I’d rather watch House of Cards. It makes more sense.

To paraphrase a quote from one of my favorite movies, Galaxy Quest, our current reality is a poorly written episode. And it’s not over, not nearly.

Today is Flag Day for those of a certain age. But in my family, it’s Esther Armstrong’s birthday. Mom has been gone nine years now.

Gone but not forgotten.

Esther Letticia Armstrong was a special woman. Wife of William Benfield Armstrong. Mother of Garry, Bill, and Anton Armstrong. I get top billing because I’m the oldest. Mom and Dad were married 61 years until Dad left us in 2002. They were a handsome couple!

I called my parents Mommy and Daddy for most of my life and it always seemed natural. Even when I was a veteran TV news reporter with decades of experience it seemed natural.

One evening I was preparing to do a live news report in the TV studio. It was the lead story. A big deal. Breaking news! My thoughts were interrupted by a colleague who said I had a phone call. No way. Put it on hold. Garry, it’s your MOTHER!  The newsroom grew silent.

I took the call. The story waited.

My Mom was a force of nature. I had no sisters, so I learned to do household chores early in life. Whenever I objected, Mom stopped me dead in my tracks with a strong, clear voice. Baseball and other critical things were secondary no matter how strongly I felt about my manhood.

My Mother was always supportive of learning and creativity. We always had books and records. Lots of them. I read books that I wouldn’t fully understand for years. But somehow I felt comfortable with Eric Sevareid’s So Well Remembered.

Decades later, Mr. Sevareid was impressed by my adolescent tackling of his book. The books and music fired my imagination. Mom would smile when I played big band music or vocals by Billie Holiday, Frank Sinatra and Ella Fitzgerald. Sometimes she would sway in time with the music as if remembering a time when she was dancing.

I was Mom’s favorite movie date. Dad was usually tired. He often worked two jobs and just wanted to rest. So Mom and I went to the movies. Often three times a week. Yes, that’s how my love affair with movies was born and nurtured.

Mom seemed like a different person during our movie dates. She smiled and laughed. Those were the days of Clark Gable, Jimmy Stewart, Gene Kelly and other legends who were still in their prime on the big screen. I remember Mom giggling when we scored big on dish and glass night events at our local movie theater.

I know we tend to look back on our youth with rose-colored glasses. It’s normal. But there were lots of good times.

So, today as I remember Esther Armstrong’s birthday, I wish I could crank up my hearing aids and hear it again …

Garry, your Mother is calling you! 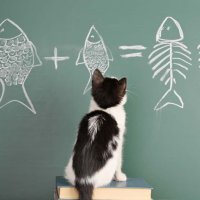 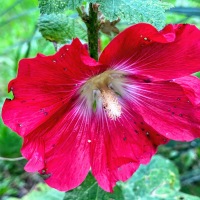