Home › Archeology › SHARING MY WORLD: THIS WEEK IN UXBRIDGE EDITION

SHARING MY WORLD: THIS WEEK IN UXBRIDGE EDITION

We made the news again! The gypsy moths made it a week ago, but this week … the town water is polluted! So exciting! And here we are, outside of town and we have our own well water. Our water is fine, though who know how much the flushing of the city  tanks is going to affect water pressure all over the area.

Oh, update. They fixed it. So you can drink the water again. Yay.

And now, to the main event:

How many languages do you speak?

I used to speak Hebrew with a grating American accent. The accent was bad enough to make people say “Speak English, please!” I am living proof that being musical and having natural aptitude for languages are not the same skill set.

I still can speak Hebrew a little, but I understand a lot more than I can speak. I also understand a good deal of spoken French (all those years of schooling had some effect, however minimal), but when I try to speak, Hebrew comes out. My language buffers are insufficient and need a serious upgrade.

What are some words that just make you smile?

Wicked which, in New England, means “great, terrific, fabulous.” Wicked good is about as good as it gets.

If you were the original architect of one existing building, which building would you select?

I think I’d go with the Boston Statehouse, which is very similar to the Capitol building in D.C. Same architect, same general design, but the one in Washington is much larger. I rather like our comparatively intimate edifice. Once, when I was new in Boston, Garry took me in, introduced me to one of the “old guard” people who worked there … and I got the absolutely best tour of the building you could imagine. And a lot of anecdotes to go with it. 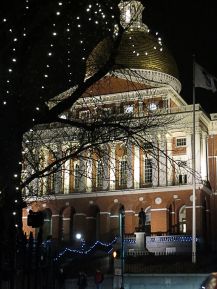 From the back, Boston Statehouse

Far back of the Massachusetts State House 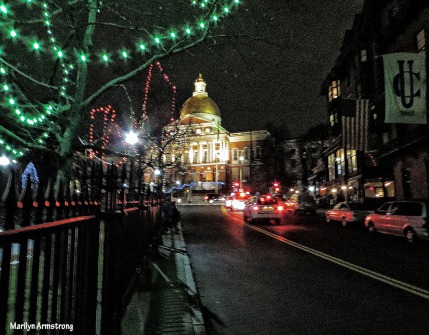 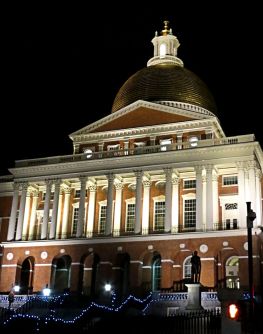 Bill Weld was governor then and I remember Garry asking “is Himself in? I’d like him to meet my friend.” Sadly, The Honorable Governor Weld was not in attendance that day. I would have like to meet him. I’m told he was a big Pink Floyd fan.

Would you rather have telepathy or telekinesis?

Actually, I’ll hold out for teleportation. I want to take my whole body to other places. I can walk to the kitchen and get a coke without special powers, but getting myself across the ocean to Switzerland, England, France … or Australia?  That might need a more powerful magic.

Barring teleportation, I want to be a full-fledged superhero … or a powerful wizard. Or both, please.

As for telepathy? I hate eavesdropping.