If privacy is what you want, what are you doing on the Internet?

Seriously. Whether you are a blogger who thinks a pseudonym will keep you off the radar, you are deluded. Even if your merely shopping for a bargain in an online store, privacy has already vanished for you. Even if you never use the Internet or social media, if you use a credit or debit card, or one of those discount cards every store seems to expect you to carry? Forget privacy. They are tracking you and they will never stop.

Do you have a telephone? Landline? Mobile? Computer? Tablet? Do you use WiFi with your camera? Post pictures on Flickr? SnapChat? Facebook? Twitter? Your dogs are licensed? Get electricity from the local power company? You’re on the radar. Your government has you in their sights. Rumors to the contrary notwithstanding, you can run, but you cannot (successfully) hide.

There are cameras everywhere, watching all of us. They track us by our tax returns, our credit cards, our hospital IDs, our driver’s licenses. Our GPS has a two-way signal. Somewhere, they have your fingerprints, your DNA, your high school and college records. Your military service documents. Every traffic ticket and misdemeanor. Every letter you sent to a newspaper and every petition you signed online.

Somehow, it’s so appropriate that today is squirrel appreciation day. I’m not sure why, but it is. This is a holiday I can wrap my brain around!

For the first time since I started the feature in the Fall of 2012, my weekly Saturday Squirrel post coincides with the biggest sciurine holiday of them all, National Squirrel

Appreciation Day!  Celebrated every January 21st since 2001, it is a time for reflecting on the many positive qualities squirrels bring to our lives.  It is a time to love the species rather than curse its existence.  It is a time to celebrate the happiness and joy that we humans can get from these very special arboreal critters that can be found almost everywhere on earth!

The Nest will honor this most glorious occasion by recalling some of our favorite Saturday Squirrels from the past, so you can get to appreciate their beauty and humor one more time!  And we may as well start with the squirrel who appears in every Saturday post…

It started out to be a bummer of a day and went downhill from there. 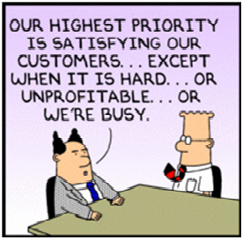 I called customer service. We had a disagreeable conversation about how they couldn’t do anything except reduce our package to 165 channels, 160 of which are shopping channels, religious channels, MTV, and radio stations. None of which we would ever use. It would remove all the sports channels, every movie channel including Turner Classics, leaving us with a hefty bill, the networks, and dyspepsia. I asked to be switched to the “customer retention” department because I was feeling in a very “unplug the bastards” mood.

Customer Retention is the department in charge of keeping folks like us from cutting the cord. They are the designated “let’s make a deal” department. I know the routine. I get to do this every year when they hike up my rates because whatever special deal or discount they gave me last time expired.

The little snot assured me there was absolutely nothing she — or anyone — could do. Assured me that “customer retention” would also be unable (unwilling) to help. I said “How about you connect me with them anyhow?” Still protesting, she transferred me.

Customer Retention offered me a $20 a month discount for a year. I said “thank you” but why couldn’t we just make some kind of arrangement so I don’t have to go through the same routine every January? He thought that was pretty funny. I heaved a deep sigh, thanked him, and hung up. Went to the kitchen to make dinner. Which was going to be almond-crusted salmon, except the salmon was full of bones. I was extracting fish bones with my tweezers when Garry called from the living room. The cable box had no signal. It wasn’t doing anything. I suggested he reboot again. If that didn’t work, I’d call Charter. 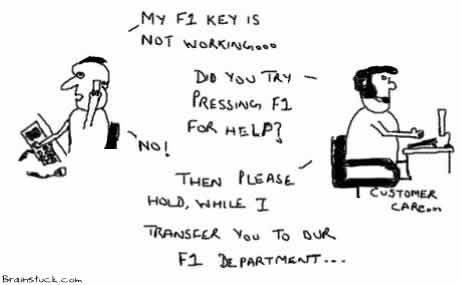 I continued extracting salmon bones and Garry informed me he had rebooted twice. Still no signal. I was going to have to call Charter. Pull out my fingernails. Burn me with hot pokers. Stretch me on the rack. Waterboard me. But please, don’t make me call Customer Service.

Yet, there was naught else to be done. I called. Got The Robot. Couldn’t seem to get past the robot, so I called again and tried a different sequence of keys, eventually winding up at Technical Support. Nice guy. Couldn’t figure out what exactly was causing the problem, but he tried to fix it. Couldn’t. Finally said he was transferring me back to Customer Retention. Whatever they’d done had made it impossible for them to access my line.

Back at Customer Retention, some guy named Scott (or maybe it was Sean?) told me the discount he’d put through had, for some reason, failed to complete its journey and was clogging the pipes, so to speak. He did stuff and said he thought he was almost done. Just a minute more, he said … and I waited. And waited. And then, I realized I’d been disconnected. Furthermore, not only was the cable box not working, but now the telephone signal was dead. No dial tone. No TV.

I pulled the cell phone out of my bag. Called Charter Customer Service. Fought my way through the robot, the clueless secretary, eventually winding up back at tech support who transferred me to Customer Retention. They said my phone was working fine. I said no it wasn’t and I would appreciate them giving me back both my cable service and my telephone, please. And would they please try not to turn off the WiFi too?

They gave me an additional $50 a month discount for a year. Said they had done all they could from their end. Reconnected me with Tech Support. Who explained they had no idea why it wasn’t working, but it should start working. Any time now.

They couldn’t fix the phone. Not their department. Not to worry, though, it would all be fine. Eventually. Just , well, their servers were slower than usual. National events messing with us, no doubt. I didn’t bother to point out that from my perspective, they actually hadn’t fixed anything yet, but it was good to know that my bill would be lower. 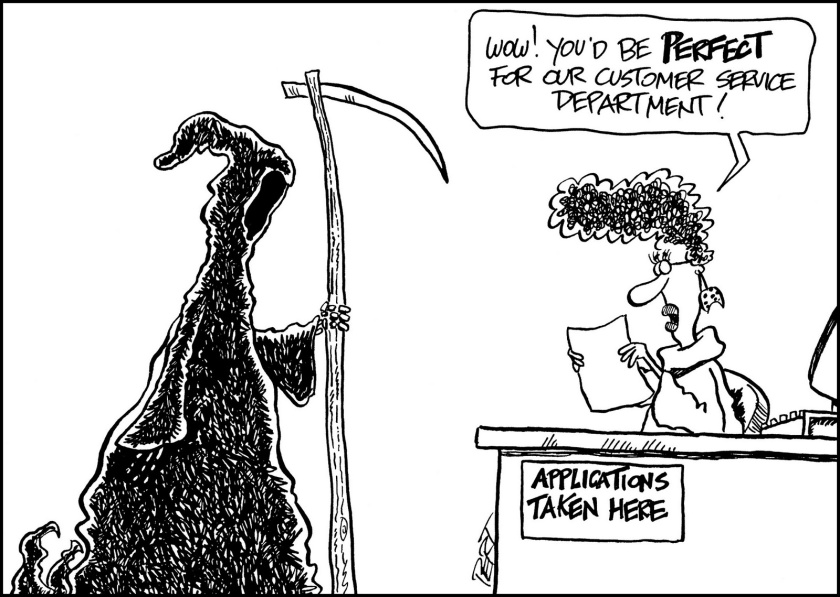 Telephone Service Department guy was very pleasant and had the best voice I’ve listened to in a long time. A rich, deep basso profundo that would put James Earl Jones to shame. He also got the phone working in short order. Not just a pretty voice. Sadly, he was unable to tell me why my cable box was still not working, but he was sure it would be working … maximum another hour. Or two. But maybe we should just not plan on television this evening.

I went back to the kitchen and tossed the salmon in the trash. I’d lost my enthusiasm for extracting fish bones. Garry offered to make a run to MacDonald’s. I said I wasn’t eating anything from anyplace with “Donald” in the name, so we had spaghetti. After we’d eaten and cleaned up, we rebooted the system.

I called Charter Customer Service. This time, the robot said it could tell I’d called before and was this the same problem? I shouted “YES!!” into the phone and was transferred to my favorite live person, the clueless secretary whose job it (apparently) is to prevent customers from talking to people who know something. I said I needed Customer Retention and she said I didn’t. I was getting hoarse and tired. Garry was sitting next to me with his head on the table, face down, gently banging his forehead.

Technical Support checked with Customer Retention. Assured me that everything was right as rain, no problem. I didn’t think I was being unreasonable when I asked how come I still didn’t have a signal? He said he was positive I would have a signal … maximum an hour. I said that was what the last guy said. He said he didn’t know why it was taking so long. I assured him that I had been asking myself that very question.

We chatted pleasantly about this and that and he asked me how many times I’d called and I said honestly, I couldn’t remember, but it seemed like a lot. He repeated that he was sure it would all work itself out and maybe we should just not even try to watch TV this evening? Who’d want to watch it anyway … because … you know … whatsisname being inaugurated and all.

Two hours later, still no signal. We’re watching “Murdoch Mysteries” on AcornTV. Streaming video, the saving grace of modern viewing. We’ll catch up with our regular shows later. If anyone were to ask my about my day, I’d have to tell them my favorite moment was when while allegedly fixing the cable box, they disconnected telephone service. That was special, don’t you think?

I’m going to have to call Charter Customer Service. Again.

Oh, and they gave us an extra $10 credit on the next bill. Whoopee! So … we weren’t going to watch the inauguration, but if we had been tempted, we were saved by Charter unplugging us. Mysterious ways. Very mysterious.