ONCOLOGY AND AN INTERESTING BOOK

REPLACEMENT BREASTS – NOT QUITE ORIGINAL ISSUE

Anyone who has had cancer, no matter how many years have passed, knows you are never “cured.” The best anyone can say is “so far, so good.” Cancer isn’t a single disease. There is no test to tell you your body is free of cancer cells.

This is, of course, true of everyone from birth till death, but when you have had a run in with cancer, it stops being theoretical and morphs into something more sinister and personal. In 2010, I had a double mastectomy, losing both breasts to cancer. It wasn’t a prophylactic double mastectomy. I actually had cancer in both breasts. Two unrelated tumors at the same time. The odds against getting breast cancer in both breasts simultaneously are incredibly small. I seem to be one of the those people who manages to beat normal odds — not in a good way.

After the mastectomies, I got instant reconstruction. Two silicon implants replaced my breasts. They do not, as people imagine, look like real breasts. When you are in the tunnel through breast cancer to (hopefully) recovery, you find yourself answering weird questions. Like “how large do you want them to be?” Do you want nipples? Saline or silicon?

I went with smallish and no nipples (they require two extra surgeries and they are entirely for appearance), and silicon, which feels more real. I suppose it’s all for appearance, really — the appearance of womanhood matters when the parts have been replaced with something that isn’t real flesh.

Everything went well — or as well as these things ever go. I hoped I was done with cancer. Imagine my surprise when I realized there was something hard underneath the scar across my right implant. Flat, hard. My first reaction was “What the hell?” Can I get breast cancer without breasts?

I hit the Internet to discover it is probably scar tissue. Or (unlikely but not impossible) a very rare form of skin cancer that grows directly under the mastectomy scar. Rare isn’t impossible. Not in my world, so reluctantly, I made an appointment at the Dana-Farber. It is the only dedicated cancer facility in Worcester County and has been where I’ve done all my follow-up since the surgery.

I had my surgery and reconstruction at the Faulkner Hospital in Boston. My surgeon and plastic reconstruction surgeon are the best. Anywhere. Literally described by my local oncologist calls “the dream team,” If you have breast cancer, this is as good as it gets and if life throws this at you, I strongly advise you to find the best surgeons, even if they aren’t convenient. You want to get this right the first time.

My oncologist thinks, as I do, that it’s nothing to get excited about, but we’ll watch it. If it seems to be growing, or starts hurting, we’ll move on to testing. In the meantime, I take a deep breath and can return to worrying about the lunatic pretending to be President who seems intent on making my personal angst irrelevant by blowing up the world.

As this was going on, I have been reading. A lot. Most of the books have been lackluster, to put it kindly. Life and Other Near-Death Experiences: A Novel by Camille Pagan grabbed me from the first page and kept me engaged to the end, wishing that it wouldn’t end. Which is a pretty unusual thing to say considering the book is about a young woman who discovers she has a very rare, aggressive form of cancer and her marriage comes unglued — at the same time. Literally, both things hitting her on the same day. 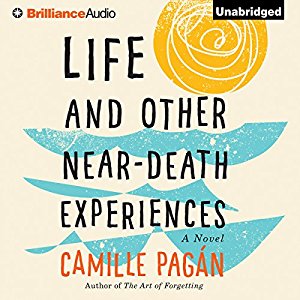 What takes the book out of the ordinary from other books that deal with life and death, is it never takes the easy way out. No cheap or easy solutions. It confronts real-life decisions that people in major life crises are forced to make. It does so with humor, wit, and realism.

The main character of the story freaks out when her life falls apart and needs time plus substantial support from family and friends to face her new reality. It’s the most realistic story about dealing with cancer I’ve read and it wasn’t depressing. Not a guffaw filled romp or a vale of tears. It reminded me that how we react to appalling news varies, but we all react. You cannot fail to be changed by facing death while realizing there’s no guarantee you’ll beat it, no matter what you do.

Once you’ve had any medical crisis that will kill you left untreated and might kill you anyway, even with treatment, you never look at life the same way. You don’t take life as a given. None of us should ever take life for granted, but most of us do. Until we come face to face with the dark angel and he’s holding our number.

This is a good book. A surprisingly good book. I hope it will get some attention. It is lumped into the category of “humor” where it doesn’t exactly fit … but I’m not sure where it would fit. Maybe humor is as good as any other placement.

Regardless, any book that can make you laugh in the face of death is worth a read.