We were supposed to be somewhere else. We should be there. We should not be here. But we are here and I am not happy about it. Of course, there is another computer — my computer. It has a ton of expensive software on it Garry will never use, but I will use.

You don’t want it? In it goes to the trash. But his doesn’t have one and nothing I did would help. Nothing. At. All.

My family is snarling at each other.

Expectation? We were supposed to be away. Far away. Having fun. Instead, we are here, trying to figure out why Garry’s Gmail account has no trash. And why his computer up and died for no reason.

I’m trying to feel good about this but I am not succeeding. Bah. Humbug. HUMBUG.

I’m sure I’ll be in a better mental space tomorrow but as for today? Humbug, I cry. Double that. Double humbug.

Downtown on the Commons

It has been snowing almost continuously since the beginning of the month. We’ve had a day here and there without snow or sleet, but mostly, it has been precipitating. And I’ve been shoveling, then shoveling some more. The last two days we have spent awaiting a plow. There’s no point in plowing while it’s still snowing … and competition for plowing services gets intense.

Late afternoon with the sun low in the sky

The town hasn’t taken down the Christmas decorations yet, so red bells are still in the picture

Finally, in the middle of the afternoon, the plow arrived. And did a pretty good job. I still had to go out and clear off the car. Then I dug out the parking area because there will be sleet tomorrow and the next day and before the weekend, it will be snowing again. If you don’t clear the space, you wind up with ice that doesn’t melt until the flowers are blooming.

The library from the Commons

More snow on the Commons

I took the opportunity to  go into town. With the Olympus OM-D EM-5 and a nice 12-50 mm lens. Our little town looked like pictures from the past. If only we could get the pretty part of the snow without the rest of the mess.

That’s me, doing my job, clearing the snow from our parking area. Obviously Marilyn’s picture. You knew that, right?

I woke up in the middle of the night with this music in my head. So, here it is again. For me, this is haunting music. and sometimes I really need a fix.

Animusic is music made visual. If music can be seen as well as heard, ANIMUSIC makes it so! Enjoy! I own several of their DVDs and they are wonderful. You can visit their website and see what’s available. The kind of music varies from classical to hard rock to “hard-to-describe,” but all of it has the same ability to let you actually see music, every note. If you don’t normally like music, you might like this because it isn’t like anything else. 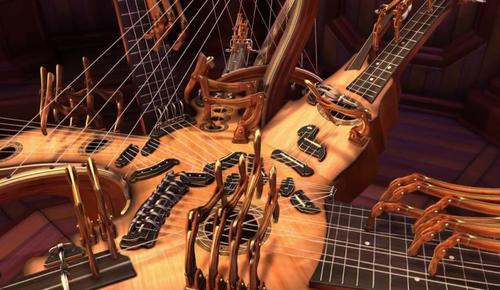 I find this piece of music haunting and sometimes, I play it over and over again and can’t get it out of my mind. There’s something about it. Turn up your speakers, then watch, listen and be awestruck!

Click on the graphic (above) to see the entire production.

Animusic specializes in the 3D visualization of MIDI-based music. Founded by Wayne Lytle, it was originally called Visual Music. It became Animusic in 1995.

The company is famous for its futuristic computer animations in which the music actually drives the animation so that what you see and the music precisely correspond. This is as close to “visual music” as you can come.

Although other musical animation productions exists, there are differences. The models for Animusic are created first, then are programmed to do what the music “tells them.” Instruments appear to be playing themselves …  instruments that could never exist yet somehow seem entirely plausible. Many people, on first seeing an Animusic production ask if the instrument or instruments really exist. I thought it was real … strange and remarkable, but real. They are startlingly realistic. Sometimes funny, too.

Of course, it’s all about money. It’s always about money. The bottom line. The best offer. Fans? Audience? Who cares? Not the Westminster Kennel Club. Moving from the relative convenience and general availability of USA to FS-1 and a secondary National Geographics outlet (and streaming outlets we don’t have), many (maybe most) people won’t be able to see the show.

NOTE: The Agility Masters finals were Sunday night. Tonight is the second and final night of the show, including Best In Show. Fox is doing a pathetic job of it, but Fox does sports poorly. The dogs are great, even if (other than one woman who actually knows what she’s talking about) the reporters and commentator (male) are bad. Fox has a long contract withe Westminster Kennel Club, so if you’re stuck with Fox for the duration. If you love the dogs, try to get past the awful production.

Over the past couple of decades, Westminster and dog show viewership in general has been climbing. No longer just for people who own or show purebred dogs, the show has given millions of dog fanciers the opportunity to see how the various breeds should look, and learn a little about them. Gain some appreciation for their elegance, beauty, history, and the jobs they did in the past and do in the present.

Other than the toy group, most dogs were bred to perform real tasks and many still do, although they may do different things than they did in past centuries.

Terriers hunt. Mostly vermin like rats and mice, but also badgers and other larger critters that were considered pests to farmers. They don’t do much of that anymore, although give your Cairn a shot at a mouse or two and you might be surprised at what efficient hunters they really are. Unlike cats, terriers absolute revel in killing vermin. They don’t eat it. They just love the hunting and killing.

Our first terrier, a little Norwich Terrier Champion named Divot, was a mighty huntress and while she was young enough, no mouse survived in our house. She’d kill them in a nanosecond and pile them like cord wood at my feet. Someone told me she did that because she felt I had insufficient hunting skills and needed to supply me with meat for the lean days. Personally, I think she was just letting me know how good she was.

She would also, when opportunity hopped, hunt frogs. She didn’t care for water, but she developed a real taste for frog and would brave the wet to catch and eat two or three wriggling frogs plucked from the shallows of a pond. There’s no accounting for taste.

Most of our “protector” dogs were originally herders. Sheep, mostly, but some cattle, too. Little dogs were and are used to herd cattle by nipping at their heels. The bigger herding breeds like collies, German and Belgian shepherds and many other similar breeds, are sheep herders. They are now used for many other things, like protecting their human flocks, and for the police and military. The big guarding breeds — Dobermans, , mastiffs and other mastiff breeds, including the much maligned pit bull varieties — were bred to guard. And guard they will, even without special training. It’s in their DNA.

Other breeds, like labs and Golden Retrievers, spaniels, pointers, and setters, were gun dogs and hunting companions. They retrieve that which the hunter shoots, or tell the hunter where (and what) to shoot … although these days, mostly, they hang out in front of the fire being among the most pettable and friendly of canines.

Hounds are the nosiest dogs. Some, like bloodhounds, can follow even the faintest scent. Hounds are single-minded and shockingly smart. Some are sight hounds. Greyhounds and wolfhounds see their prey (they are far-sighted) and run it down. Others smaller hounds often live in packs — beagles, coonhounds, foxhounds, harriers.

Many are happy working alone. Some hounds will trail anything while others specialize in rabbits or vermin or whatever else they are trained to track. The thing they have in common is the instinct to chase or trail — or both. Even if it turns out they are tracking down your trash (they can always find it, trust me). They also do not object to a comfy sofa and anything you are willing to let them eat. Anything. At. All.

Toys dogs, were born for love. They adore people and want to be with them. While they may also retain guarding, herding, or hunting instincts, they are very good at one thing: loving you. You want love? They have love in abundance and are compact and seriously cute.

All of this is because I love watching the dog show. We aren’t looking to buy a dog or even adopt another one. The two Scottish Terriers — Bonnie and Gibbs — are plenty of dog for us. But I love watching these gorgeous dogs in perfect condition strut their stuff.

For all who believe show dogs are cruelly forced into the ring, you’re wrong.

A dog that doesn’t love being shown won’t be a good show dog. Great show dogs love the applause. They love attention. They are not shy. Divot had attitude. She knew she was The Best. She would tell you: “Just follow my lead and don’t get in my way.” She’d flirt with judges and strut her stuff … and win. Then she’d go home. hunt for mice and take a nice long nap on the sofa. One thing doesn’t exclude the other.

Westminster is the only major dog show in the U.S. that gets real TV coverage. By moving it to obscure cable channels not available to many people, they’ve effectively excluded a big chunk of their existing audience, and eliminated potential new viewers. Sounds self-defeating to me.

This was my Superbowl. How could they do this to me? To us? Unfair! Your honor, I object!