SHARING MY WORLD AS FEBRUARY DEPARTS

When you cut something with scissors, do you move your jaw (as if you were about to chew)?

I don’t think so. I admit this upfront — I never thought about it.

Do you chew your pens and pencils?

Are you a collector of anything?  If so what?

Ah. Collections. I used to collect everything. Now … well … maybe a few things.

I collect tee-shirts for books — the tours for new books. I have maybe a dozen of them for a couple of books I dearly love. I collect weird tee-shirts for NCIS and occasionally, stuff that just happens to have a movie quote on it that makes me laugh. Not just tee shirts. Actually sweat shirts too.

I do not collect pottery . Or dolls. I still have many dolls remaining from when I did collect them. Not as many as I had, but plenty. I’m down from many hundreds to a few hundred. Now, though, we collect dog toys. There’s always something.

To keep the collecting thing in check, we:

Oh, and widgets, gadgets, dongles, and doo-dads. All of them. Because you never know when you’ll need one of them, right? Of course I’m right. And gadget/camera bags. But not so many these days.

Some things, there’s no escaping.

What size is your bed?

Queen size. We would have gotten a king, if only for the gigantic hugeness of it. But — the room is too small. We could have had the bed, but then we’d have had to put our clothing in another room … which, all things considered, we could have done. Who knew how our world would change? 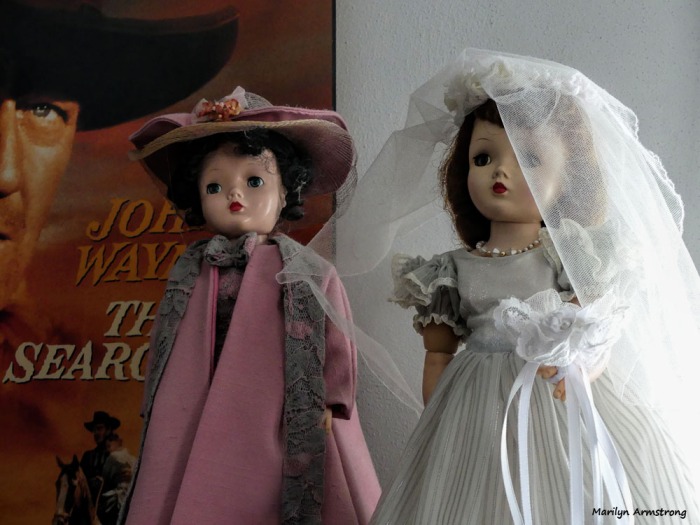 Still, I’m not the least bit unhappy with our bed. It’s the most comfortable bed in 12 universes and sometimes, just lying down for the night produces joyous moans of satisfaction.