BARBERSHOP AROUND THE CORNER – GARRY ARMSTRONG (WITH NEW PICTURES)

Haircuts can be a complex problem for a guy. Nay, you say?

Not all barbers can cut “our kind” of hair. It’s one of America’s darker secrets. If one has curly, sometimes called “kinky” hair, barbers are befuddled and sometimes nervous. White barbers. Fellas used to the electric razor and scissors to trim the smooth hair of boys, teens, men, and even older gents with fair skin.

Growing up, I always went to black-owned and operated barber shops in our diverse neighborhoods. No worries. You asked for a summer or winter haircut. Close or maybe moderate — to accommodate the weather. Awaiting my time in the barber chair, I’d peruse the men’s magazines with pictures that stimulated my growing body. The air was usually full of cigar smoke and raunchy conversation with much laughter. One of the barbers would caution there were kids in the shop. The laughter only got louder with someone slapping me on the shoulder. I remember those days with great affection.

Fast forward through the decades. It’s 1970 and I’m a newly arrived TV news reporter in Boston. Predominantly WHITE Boston. I was living IN Boston, five minutes away from downtown businesses and the TV station. There were several barber shops or men’s hair stylists in the area.

I tried one recommended by the star anchorman whose blonde, carefully layered coif was a thing of beauty.

I could feel the stares as I entered the ornate hair salon. I waited a few, very long moments until a gent who looked like the old time actor William Powell approached me. His white barber jacket had perfect creases. He offered a polite smile while informing me his shop could not properly “address” my kind of hair. I smiled and left, quietly seething inside.

I needed a trim before making my Boston television début.  So it was that I instantly became a celebrity client at the local barber’s college. It wasn’t pretty.

Word spread quickly and I received a call from Boston Mayor Kevin White’s office. A day later, I had a personal barber. It was the beginning of a beautiful relationship that lasted more than 30 years.

GARRY’S PHOTOGRAPHS OF OUR TOWN AND THE BARBER SHOP 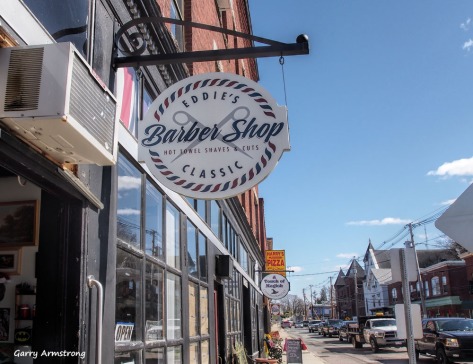 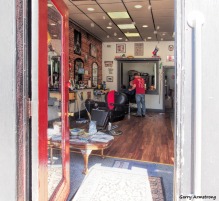 Downtown – the center of the excitement! 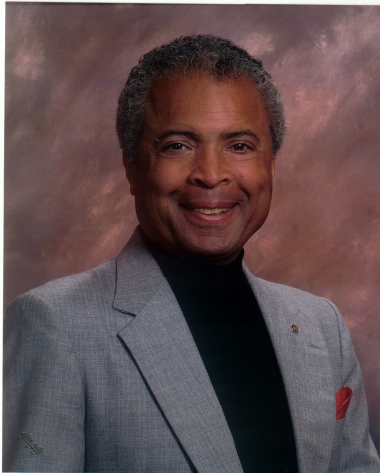 Fast forward again, maybe another 10 years. Now retired and living in small town New England,  I had no real need for spiffy hair cuts. However, I still traveled a distance because I didn’t trust any of our local barbers who didn’t seem eager to get my business.

MARILYN’S PICTURES OF THE BARBER SHOP AND GARRY 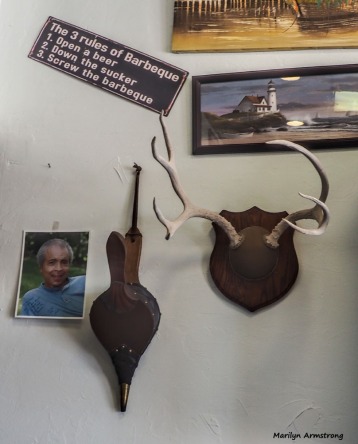 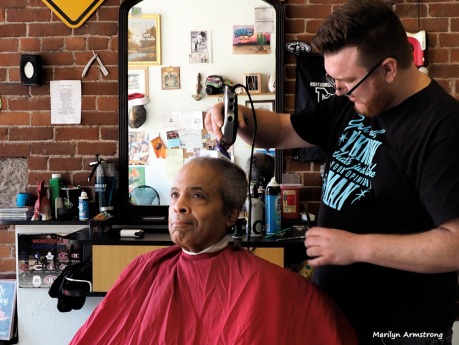 In the chair with the barber

We were now living on a fixed income. It seemed silly to travel that distance and pay $40 (plus tip) for a fancy hair salon clip with my receding hairline. I summoned up my old Marine Corps courage and decided to check out a local, corner barbershop.  The classic barber’s pole beckoned me. I entered and surprise —  smiles and friendly greetings. I walked over to the available barber and quietly, awkwardly asked if he could cut “my” hair. He smiled broadly and said, “No problem, Bro”.  It was the beginning of another beautiful friendship.

Eddie knew his stuff. He smiled as I removed my hearing aids and told him I was in his hands.  Ten minutes later and I was a new man with a crisply trimmed coif that managed to hide some of the growing shiny spots atop my head.

Eddie would tell me he prided himself with his work. It was his way of saying ethnicity was not an issue. His biggest issue? Smart-aleck kids with overbearing parents. Eddie soon opened his own shop. He branched to a second operation and is a well-respected fella in our small town. Yes, I’ve recommended him to other people of varying ethnicities.

There are no men’s magazines with adult photographs in Eddie’s place. He’s sensitive to the young people who come through the door. There are lots of interesting pictures on the wall,  most guaranteed to make you smile.

If you’re in our town and need a haircut, stop in at Eddie’s place. You’ll like him.