Home › Crime and Cops › COMEY’S TESTIMONY – SO WHAT HAPPENED?

COMEY’S TESTIMONY – SO WHAT HAPPENED?

We watched the hearing with James Comey. There were no bombshells, except for Comey’s strong emphasis on why this investigation is important. It is not about your political party — or mine. It’s about protecting the American system of election. Because what the Russians did was intentional and came from the top. And they are going to do it again.

This was surely the most important thing anybody said and as far as we could tell — except for John McCain who was on a completely different track than the rest of the train — it seemed to have gotten through. This is important. It needs to be dealt with because if we don’t, we will never be able to trust our own elections. No bombshells, but it was clear that although there had been no investigation of Trump’s involvement earlier, there will be now. If Trump had shut up and left it alone, there would not have been an investigation into his obstruction.

Our “president” is a man who can’t let anything go. He’s got to have the last word. And that last word has to be bigger, meaner, and more explosive than anyone else’s words.

No one is going to bring Trump down. Trump will do it all by himself. He doesn’t need help from anyone.

Then, as the last act in the morning’s show, up comes John McCain whose goal is obviously to connect Hillary Clinton’s “email” misuse to the Russian investigation. These two items have never been connected, so where this was coming from, no one knows. There seemed to be considerable confusion as to what Mr. McCain was trying to say. But, it was obvious. Just clumsy, awkward, foolish questions by a man who should retire. He is past his prime and needs to go home, watch some baseball. A wise man knows when to pack it in and move on. 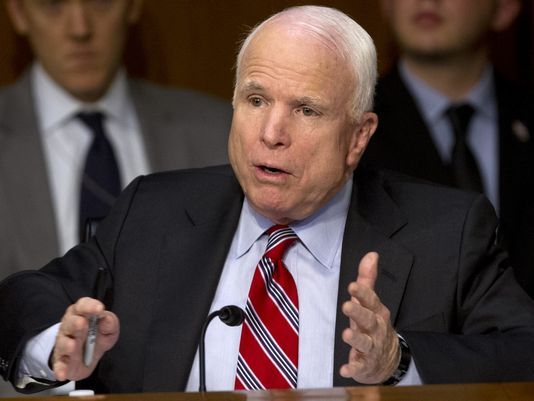 If Garry and I hadn’t watched the testimony ourselves, I would have been convinced that it had been a bombshell testimony. It was convincing … but bombshell? He had already published in advance a summary of his upcoming testimony. He didn’t deviate from what he said he would say.

Initially, commentators stayed the course and talked about what was actually said and by whom, but an hour later, they had drifted into hyperbole and overblown statements of apocalypse. Weird. If we hadn’t watched the meeting, I’d have thought something completely different had happened.

I understand how important ratings are to television, including the news … but really? Seriously? They were not lying, but they were also not exactly telling the truth. There comes a point when exaggeration can twist truth to the breaking point. In this case, the truth is sufficiently interesting. You don’t need to blow it up.

No matter what you read on the Internet about how this testimony is going to push Trump to impeachment? No, it won’t. He is more likely to get tired of the whole president thing and retire to Florida leaving us with Pence to fill out the term — and he is not better than Trump. Not one bit. This testimony did not move us closer to impeachment or anything like it. Testimony may help, eventually, but don’t believe the overblown rhetoric and hyperbole.

Most importantly, when elections come up — VOTE. If everyone votes, we can make this mess disappear in 2020. Otherwise, it could go on for eight years. I’m not sure I would survive it.

Like Loading...
‹ NINETY AND MORE: “IF YOU’RE NOT IN THE OBIT, EAT BREAKFAST”
THE WHICH WAY CHALLENGE – UP DOWN OR ALONG THE SIDE ›