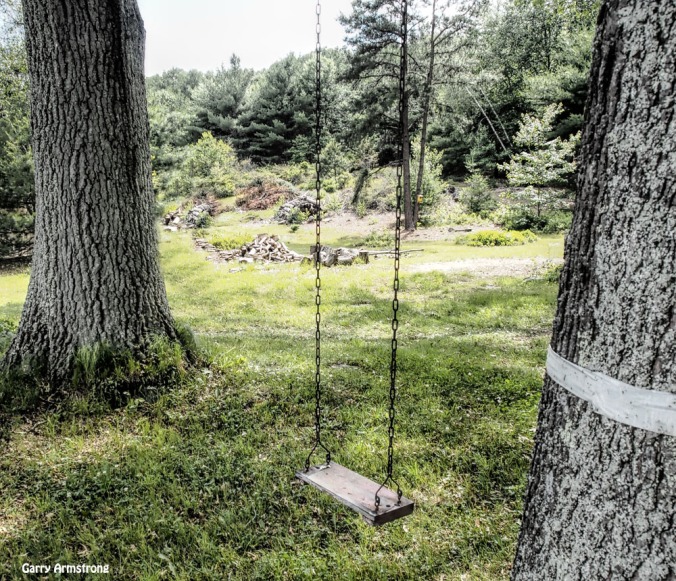 We had to take the dogs and go somewhere for a couple of hours this afternoon. The exterminators were exterminating and all life forms with four or fewer feet had to leave. And stay gone for at least two hours. It has been beautiful for the last week, but today, it rained. So there would be no long walks by the river. Instead, we took the Scotties on their first joint excursion to PetSmart. Bonnie has been there before, but it was a long time ago and she has forgotten. Gibbs … well … his life has been rather limited. Everything for him is a first.

Neither dog is properly leash broken. Our bad. Rather than wrestle with them as we walked through the aisles, we put each dog in a trolley and pushed them around. Bonnie whimpered every time we passed another dog.

I could hear their mental conversation.

“What is this place? Why are we here? What are they doing to us? Is this going to hurt?”

“Gibbs! I’m pretty sure I smell birds. Birds! Maybe we should bark. You wanna bark?”

“Naw, Bonnie. I’m going to hunker down and worry.”

“I guess I should worry too. Woe! They’re putting us back into the car … and nothing happened. We’re driving again. Is there going to be soap?”

“They might try to look at my ears. I don’t like it when they look in my ears.”

“Me too Bonnie. Let’s crouch in the back here until we find out what’s going on.”

Then, we stopped at the supermarket. While Garry and the two dogs waited in the car, I went inside. And bought things. I came out, opened the hatch. Put stuff in the car. The dogs looked at me, fear and concern wrinkling their little brows. I patted them, then closed the gate.

“Nothing has happened yet. Now I’m really scared.”

We drove home. Walked them to the gate. Put them in the yard and closed the gate. They sat on the front step, too perturbed to go inside. What did this mean? What was happening?

They are still waiting. Luckily by tomorrow, the terribleness will have passed and been forgotten.

She also met both doctors in similar ways – by going to them for help dealing with a serious illness.

When Mom was in college at the University of Wisconsin in the 1930’s, she took a commonly used, over the counter drug to help her stay awake and cram for exams and papers. Years later the drug was banned because it was discovered that it killed off white blood cells, eventually, killing the drug user. So Mom started to get sick.

The school doctors couldn’t figure out what was wrong with her. Finally someone called my grandmother and told her to come and get my Mom so she could die at home in New York City! So Grandma brought her home and started looking for a doctor who could save her. Enter a brilliant young doctor named Abraham O. Tumen. He became known as A.O. so that’s what I’ll call him.

A.O. came up with a risky but creative treatment plan. Since Mom’s white blood cells were being destroyed, he reasoned that to save her, he had to get her white cells to start reproducing again. He thought he could do that by giving her an infection, like Typhoid Fever. Theoretically, that would stimulate her immune system to fight off the infection. It could kill her, but she was dying anyway. This might give her body a chance to fight back.

A.O. claimed that the minute he saw my beautiful mother sitting in bed, in long braids, he thought “I have to save this woman because I’m going to marry her!”

The family put it’s faith in A.O. and he gave Mom Typhoid Fever! Mom remembered being deathly sick with a very high fever. But she also remembered gradually getting stronger and recovering. It was almost a year before Mom could leave the house and start her life again.

During that year as an invalid, A.O. spent a lot of time with her. She just thought he was being a conscientious doctor. After all, she was only 19 and he was 34! Finally one day, A.O. told her he had two tickets to a concert and asked her if she wanted to go. She assumed he was offering the tickets to her. She didn’t realize that he was asking her out. So she happily took the tickets for herself and a male friend! The next time, A.O. made sure she understood that he was asking her to go out with HIM.

They were married for nine years before A.O. died in her arms from a massive heart attack at the age of 43. It was Valentine’s day. Mom got his humorous Valentine’s Day card in the mail later that morning. She kept it the rest of her life and I still have it!

How Mom met my Dad is an even stranger story. While married to A.O., my mother suffered from blinding, debilitating migraine headaches. A.O. had heard about a new field called psychiatry that was making headway in treating migraines. So he contacted a prominent New York City practitioner named Abram Kardiner, my father. Mom started to see him as her therapist. He succeeded in curing her migraines and he eventually dismissed her as his patient. 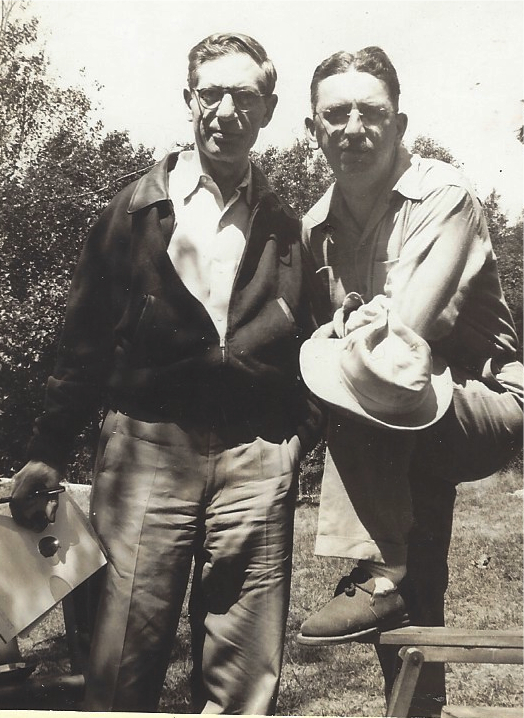 Somehow, during the analysis, Dad had met A.O. and they had hit it off. So after Dad stopped being Mom’s therapist, he became Mom and A.O.’s single friend. They became so close that Dad invited Mom and A.O to spend weekends with him and his then girlfriend at his country home in Easton, CT. This means that Mom spent time with her first husband, in the house that would become her summer home with her second husband! Strange?

Dad was the first person Mom called when A.O. had his heart attack. Since Dad was a doctor, she called him even before she called her parents. He was with her when A.O. was declared dead.

Mom and Dad dated for three years before they married and had me. Dad was 58 when he married her (his first marriage) and 59 when I was born. Perhaps their shared love of A.O. contributed to making their marriage so special and so successful for the next 32 years. Dad’s relationship with Mom’s first husband didn’t seem unusual to me until I was a young adult. But then again, the unique way my Mom met her husbands didn’t seem unusual to me until then either.

I read a post about health care in which the entire comment column was made up of people fighting tooth and nail to get rid of health care. Most of the writers were obviously not well-educated people. That’s another way of my saying I don’t think I’ve ever seen such awful language pretending to be English. I’m not talking about typos. These are people who are, at best, barely literate.

And all of them, deeply and powerfully full of hate.

They were frothing at the mouth with fury at the Democrat’s attempt to keep health care available to everyone. The very idea that this ought to be a battle about serving the health needs of the American people … and not about offering bigger tax cuts for people who already have more money than all the people I know — collectively.

They were furious. Enraged. Spewing violence and filth and hatred. To get rid of health care.

I did not get involved in this “conversation.” It was more an abscess than a conversation, a deep infection which will probably cause someone’s jaw to fall off.  Eventually. There would have been no point. These are not people who are listening to anyone but themselves. They have made up their minds — years ago I think — and do not wish to be confused with facts contrary to their preconceptions.

Aldrich Street as the sun sets

Imagine, for a moment, how much good these same people could do if they were fighting for something worth fighting for? If they were fighting tooth, nail, fang, and claw to keep the water clean. To stop air pollution. To keep developers from flattening every last tree and paving over anything alive and growing. Imagine, if you will, that all of these angry people could be persuaded to care about things that will matter not only to politicians, but to their grandchildren and the children who come after that.

Imagine the power we would have if we could stop hating and start caring. 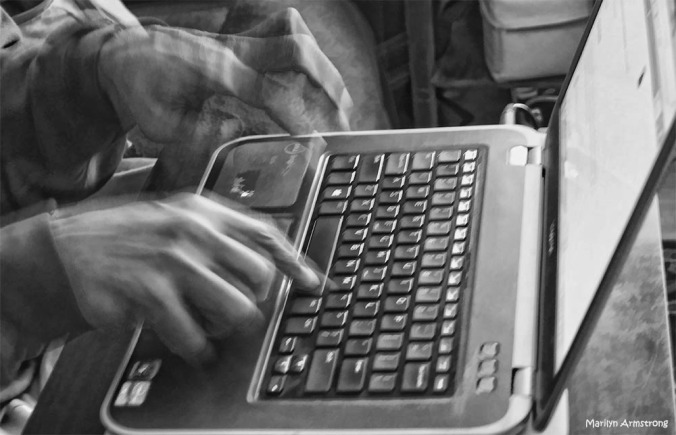 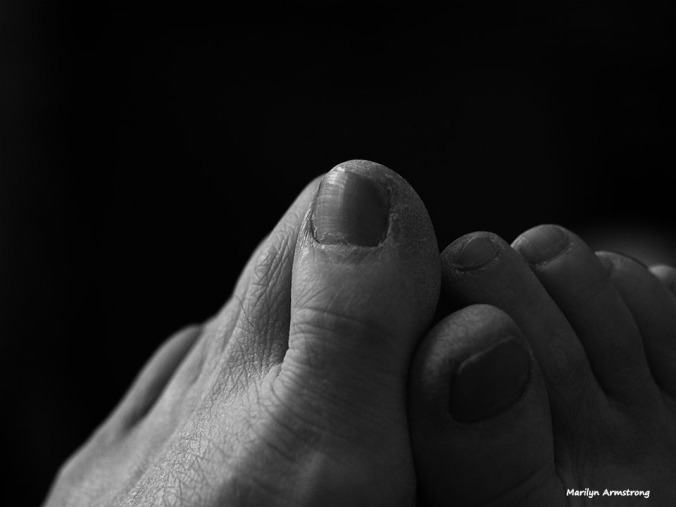 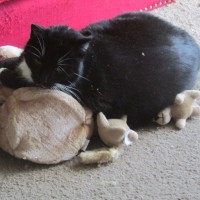