Duke is a pest.

He’s also funny, smart, playful, and ready to run, romp, and generally make a mess of everything. He has two buttons. Asleep and runaround like mad throwing toys, barking, leaping, grabbing more toys, trying to get you to keep throwing toys. Followed by more running, barking, leaping and knocking things off shelves. Stuff is falling all around us and I’m not even sure where it was before it fell down.

Gibbs with The Duke

He is hilarious. He is also a pest because … he is a dog who fetches. Fetching dogs come in two varieties: the occasional fetcher and the obsessed fetcher. He is an obsessed fetcher. If you throw the ball once, you have started a game that will never end. I’m pretty sure this is a dog who, with the addition of a few tennis balls, will never care about anything else again.

The nearness of any kind of food turns him into a vibrating wire. He is seriously hungry. All the time. I know it’s his youth, but we’ve had other dogs like this and they did not outgrow the food drive. Even when they were a whole lot bigger than they ought to be, they still wanted more food. More and more and more food. This little dog is food-driven and we are trying to keep at least this dog from becoming obese. Good luck to us!

He is a pest. He is also charming and fun and endearing. Right now he is outside growling and barking at … Gibbs maybe? Sticks and stones? He likes sticks and stones, too. 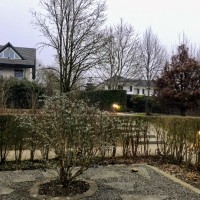