In 1962, Marilyn Monroe was working on her last movie, “Something’s Got to Give”, by 20th Century Fox. One of the producers on that film was a man named Henry Weinstein. He was brought into the production because it was thought that he could relate to and handle the very difficult Marilyn.

Henry was a long time friend of my parents. He was also married to one of my mother’s best friends. Because both my parents were psychologists and practicing therapists, Henry talked to them about Marilyn’s problems and often asked for advice about her.

At the time, Marilyn was in particularly bad shape psychologically. Henry knew she was mentally very ill and thought she was becoming paranoid as well. She also had extreme stage fright. She cried on Henry’s shoulder often. Henry had already come to her aid after a barbiturate overdose.

Marilyn was creating high drama on Henry’s set. And Henry was tearing his hair out. She showed up late, sometimes very late. Other times, not at all. She couldn’t remember her lines. She was needy, emotional, and had meltdowns on a regular basis. She would walk off the sets in tears. Lonely and alone, Marilyn was allegedly having an affair with the script girl.

Marilyn Monroe on the set of her last movie

None of this was good for Henry’s bottom line. He had to try to get the movie made on time. So he called my mother a lot, asking for help in dealing with Marilyn and her issues. He eventually asked Mom to fly out to L.A. to be Marilyn’s on set therapist. Mom refused.

My Mother believed Marilyn was too emotionally unbalanced to be helped by ordinary therapy. Mom had a delicate ego herself. She didn’t want to be known as the therapist who was called in to rescue Marilyn Monroe — and failed. Mom was also afraid Marilyn was suicidal and terrified she might kill herself on my Mom’s watch. 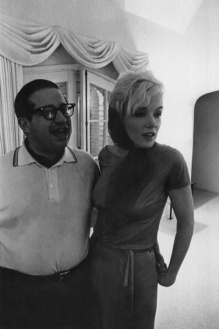 Henry begged Mom to come to L.A. to help him. She still refused. Henry ended up firing Marilyn in June of 1962 for excessive absenteeism. Two months later, on August 5, 1962, Marilyn died of another barbiturate overdose. Some people think her death was a suicide. Others think it was accidental. Regardless, the film was scrapped.

Who knows whether or not my mother would have made a difference with Marilyn short-term. She might have been able to help her through this specific crisis, but a fatal overdose inevitable — intentional or accidental. I doubt anyone could have saved her from herself.

Marilyn on the set of Henry’s film, shortly before her death

Here is an interesting, unrelated theory about Marilyn Monroe’s death. It has to do with the Kennedys. I read an article that talked about a book dealing with Marilyn and the Kennedy family. Marilyn had affairs with both John and Robert Kennedy. She began to get clingy and demanding. Started discussing going public about the affairs, which had been kept completely under the radar and out of the news. The Kennedy ‘people’ felt Marilyn was becoming a dangerous liability. So they banned her from seeing or communicating with either brother. She was expelled, cold turkey, from the inner circle.

This happened just a few months before her death. There are those who believe this expulsion along with the movie firing, significantly contributed to her final downward spiral. As evidence, Marilyn made several phone calls after she took her fatal overdose. One call was to Bobby Kennedy. Why? Maybe she was trying to get back into the Kennedy boys’ good graces.

We’ll never know for sure. It’s part of the mystery that was Marilyn’s life and death.