I’ve been watching the coverage of Hurricane Harvey and the unbelievable flooding it is causing. I can’t help but think that God really, REALLY hates Texas. I’m 66 years old and I’ve never seen a hurricane hit land, turn into a tropical storm, go back to sea, hit land again, go back to sea again, and hit land a third time. 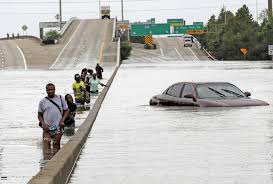 The statistics are hard to wrap your head around. As I am writing this, the storm is still going strong and will be for maybe two or three more days. To date, this storm has dropped over 20 TRILLION GALLONS OF WATER ON TEXAS AND LOUISIANA!

Stop now and try to wrap your head around that number.  And it isn’t over yet. There will be more. Estimates are for over 25 TRILLION gallons when this is all over. The weather channel has had to add two more colors to their rain fall charts to adjust to these levels of rain fall. 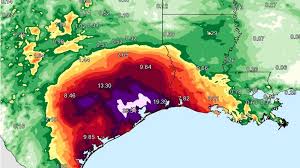 The endless scenes of people being rescued reminds me of an old, old joke. There is a great flood and a man who is a devout Christian is trapped on the roof of his house.  The local police come by in a canoe and shout out to him to jump off the roof onto the canoe. 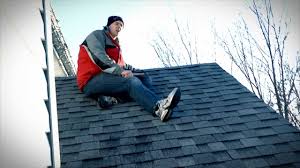 “Jump in the canoe!”

He replies: “No, I am a man of God, and my God will protect me!” The police argue with him for a while but he will not relent. Eventually they give up and move on. They have other people to save.

A few hours later, the water is up to his thighs when the State Police come by in another canoe and they tell him to jump in. Again, he states, “No, I am a man of God, and my God will protect me!” After arguing with him for a while they give up and move on.

Another hour goes by and now the water is up to his waist. A Coast Guard Helicopter arrives over his house and a bullhorn shouts out, “We are lowering a basket. Climb in and you will be saved.

Again, he replies, “No, I am a man of God, and my God will protect me!” So, the helicopter leaves because they have other people to save.

Another hour goes by and the water sweeps the man away and he dies. Suddenly he is in heaven at the feet of God. And he is livid. He is furious. He shouts, “GOD! I was a man of faith! I believed in YOU! HOW COULD YOU HAVE FORSAKEN ME???!”

And God looks down at him for a second and says: “Forsaken you?? What the Hell are you talking about?? I sent you TWO CANOES AND A HELICOPTER!!!”

I’m not the first person to notice that what may turn out to be the worst storm in history is hitting an area where a lot of folks there don’t believe in climate change. 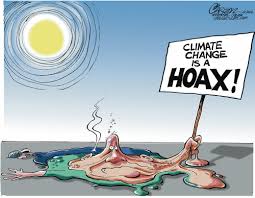 I used to do a stand-up comedy routine (shameless plug):

where I talked about working in the news.

My point was that the news was always the same. Every week, somewhere in the world, there was an earthquake, hurricane, tornado, or flood. And no matter where it happened, we would send a news crew to gather a poor family who had just lost all their worldly belongings, set them up in front of their recently destroyed mobile home and ask them THREE STUPID QUESTIONS.

The first was “How do you feel?”

The answer was never the one you would think …

“How do I feel? I just lost all my worldly belongings. How the hell do you think I feel? How do I feel? I feel great!!! I haven’t had this much fun since my last hemorrhoid operation!

The second was “Will you re-build?”

To this question the answer was always, “Oh yes, this is the third time in ten years we’ve been flooded out. We will rebuild.” 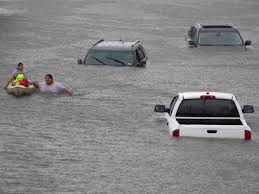 And the reporter would say “But why? You’ve been flooded out three times in ten years?”

And they would say “But this is Paradise! This is God’s country!” 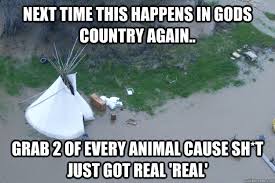 And I would reply, “Don’t you think God is sending you a message??? GET THE FUCK OFF MY PROPERTY!! I’VE FLOODED YOU OUT THREE TIMES IN THE LAST TEN YEARS FOR CHRIST’S SAKE! CAN’T YOU IDIOTS TAKE A FRIGGING HINT???” 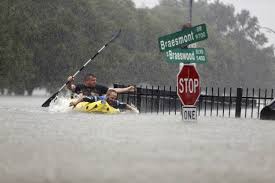 I’m telling these jokes because it helps me deal with the horror of what’s going on right now.

What’s happening in Texas now is horrific. Millions of people’s lives are being thrown into unimaginable chaos and despair. Global warming, global climate change is real. The NOAA and the weather channel label these storms as storms of the century, the floods are 100-year floods, 500-year floods. Harvey is being called a 1000-year flood. But it’s not. Hurricane Sandy was a Super Storm that was a 500-year event. And that was FIVE YEARS AGO! 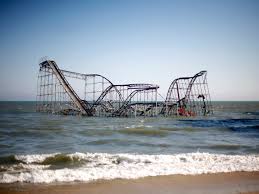 Hurricane Harvey’s flooding is not a 1000-year event. It’s next year’s event. Maybe next month’s. The hurricane season isn’t over yet.

AND NOW — It’s a week later. Irma, the most powerful hurricane to ever be born in the Atlantic, is hustling towards Cuba … and probably, Florida … with 185 mph winds. After that … well … who knows, right? It looks like whatever parts of the U.S. aren’t underwater are on fire.

Do you think that maybe God is, in fact, sending us a message?

PS: In case you’re curious, what was the Third Stupid Question?

“What did the tornado sound like?” And you all know the answer.“ It sounded just like a freight train going right through our living room.”

That’s a whole other blog.