A cautionary tale for lovers of stuffed, furry toys
– and dawgz!

No one wants to talk about that dreadful, dark day in history. It was a day of senseless violence — as opposed to those many other more sensible violent periods. The massacre was perpetrated on an innocent, unsuspecting civilian population. The blemish on our national reverence for furry creatures with embedded squeakers can never be erased.

Squirrel was the first — but hardly the last — casualty.

We treasure stories about children playing with teddy bears. We sing lullabies about cuddly, soft animals who live in the sense memories of our innocent kid years.

We should have seen it coming

But, now there’s a darker, more murky chapter. It’s about our Scotties, Bonnie and Gibbs. A bloody chapter about the ambush at Furry Toys Pass!! 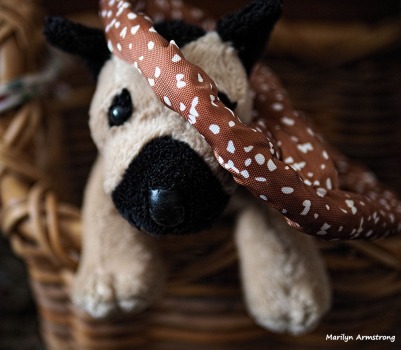 Happy days in the basket of safety 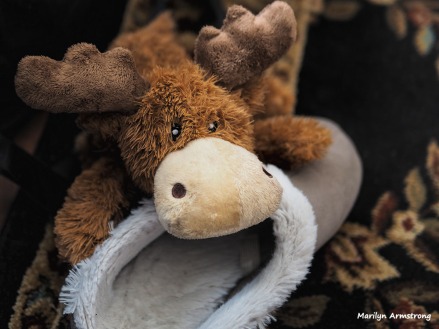 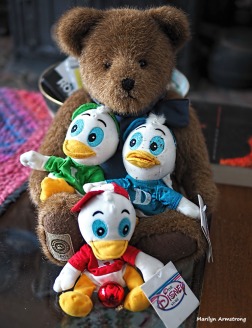 There’s no forgetting the innocence of the furry victims. Mr. Rabbit, the Hedge Hog brothers. Cousin Squirrel, and Yellow Beaky Kid. They lived their lives in quiet solitude, in a hidden valley that promised safety from marauding Scotties. 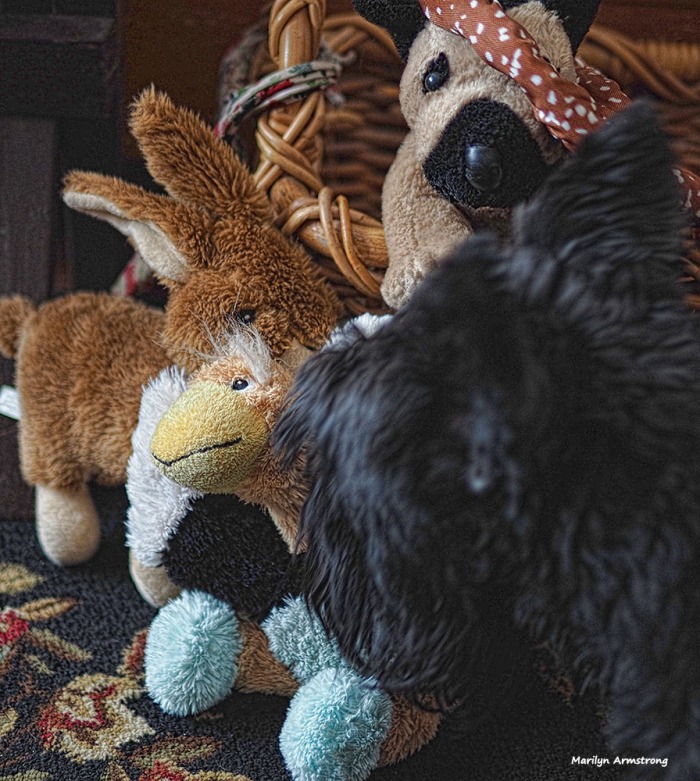 Security was heightened as new members joined the furry family.  But the Scotties had a mole who leaked information to them about what should have been The Safe House. Danger was near. No one fully appreciated the depth of the Wrath of the Scotties.

With fang and claw, Gibbs is first to attack!

Deception was a key part to Bonnie and Gibbs game plan. They appeared quiet and serene, maybe nothing but biscuits on their mind. We were lulled into a false sense of security. The Furry Kids were left alone and vulnerable in the pass that led to a box canyon and the badlands. 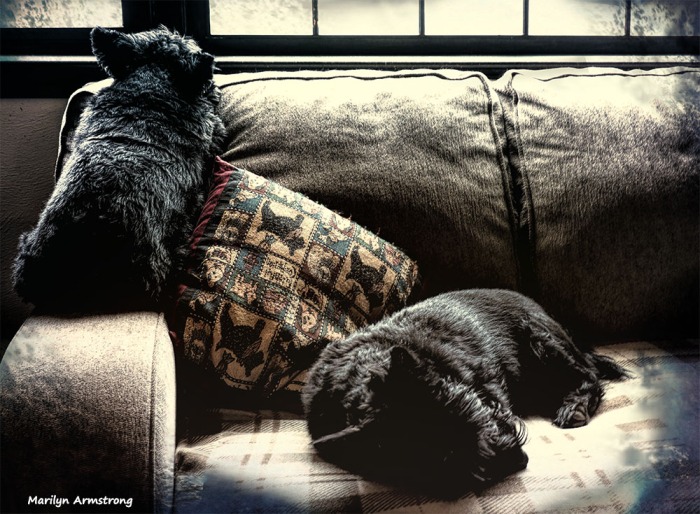 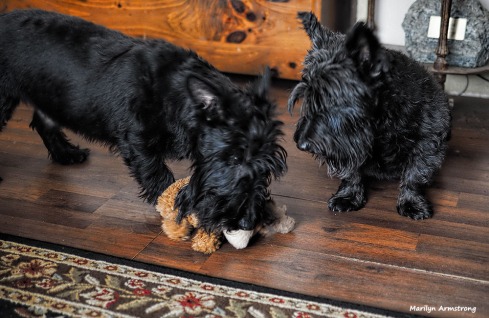 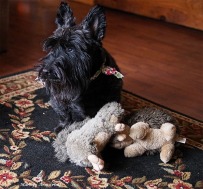 They could run, but they could not hide! 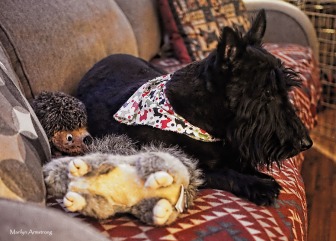 Gibbs, now with squirrel – soon to be a gone squirrel

In a flash, Bonnie and Gibbs made their move!! We couldn’t believe what happened. Mr. Squirrel!! The Hedge Hogs, The Soggy Doggy and Yellow Beaky Kid — all snatched in cruel jaws before we could move to save them. We couldn’t keep up with Bonnie and Gibbs as they swooped in for their prey.

Back up troops were too far away. Bonnie and Gibbs had taken over Furry Toys Pass!!

We’re now waiting for a dispatch from Reuters to see if  Bonnie and Gibbs will consider a diplomatic trade-off for the lives of their furry hostages. The Scotties are adamant in their demands. They want a huge payoff. BIG biscuits, none of those wimpy, small brittle things that melt in their paws.

We’re not sure if we can save the furry kids from prison time. Too many treaties have been broken, too many treats consumed. Too many casualties with holes in their furry bodies, squeakers mashed to groans. Too much hours spent stitching and mending. Too many colors of thread needed — and too many needles.

The Old Man was right about those Scotties. They are bad.

Bad to the Bone!!

A final note: With the addition of Duke the Dogge, crazed killer from east of Uxbridge, all that remains are carcasses. Yesterday, new carcasses arrived as well as three new squeaky balls and a dozen low-bounce tennis balls. The bodies of the soon to be demolished are hanging on the door of the microwave. Their days are coming.