THE ULTIMATE INEFFICIENT LEARNING OF A GRAPHICS APP

INEFFICIENCY AT IT’S BEST – LEARNING ACDsee WHEN WORDS MEAN NOTHING

I have been using a very old version of Photoshop for a long time. It’s CSS5 and I know I got it when I left my last job — and that was 2008? Maybe a year earlier. It could have been 2007. That it actually works at all is amazing and works quite well is more amazing.

But the clock is ticking. Sooner or later, Windows 10 will upgrade and  Photoshop CSS5 will stop working. I refuse to subscribe to Adobe. We are on a fixed income. Today, Adobe wants $10 a month. In ten years, what will they want? $25? $50?

Our income is not going up. Ever. That’s what they mean when they say “fixed” income. It never goes up . What may be a reasonable income when you retire can easily be half of what you need 20 years later. Many of us live longer than we used to and since I’m not planning to quit taking pictures until they pull the camera from my cold, dead hands, I need to make arrangements that work for me.

I needed a new graphics program.

I finally settled down to two possibilities: ACDsee and Corel. I had used Corel for years until I lucked into Photoshop, but back then it was highly destructive to the original photograph. Rumor had it that Corel has come a long way. I downloaded the trial versions of both applications.

I required a few things:

2 – It must be non-destructive.

3 – I need to be able to figure out how it works without a masters in that application.

I’ve been using Photoshop for years and I’ve learned maybe 10% of its potential. Possibly less. I’ve learned what I need to know and nothing more. Photoshop is difficult. Although photography is my hobby, it is not my profession. I love taking pictures, but I’ve served my time in the high-tech world. I’m just not willing to work that hard these days. Lazy? Absolutely. I’m retired.

No one makes a better graphics processor than Adobe, but no one has created any application as non-intuitive. Functions are put wherever a developer felt like putting it — without regard for logic or reason. Why is the “level” option located under the color dropper? What does one have to do with the other? Answer: Nothing. They had a slot, so that’s where they put it.

I wanted something I could figure out without a spirit guide on my shoulder whispering in my ear.

Corel was clearly the winner in the “ease of use” department. I could almost immediately understand what the little symbols meant and pretty quickly deduce how to use them. But the application would not install properly. It first refused to install on my C drive. I have two drives. Drive C is a 256 GB solid state drive. It’s where I put applications and where Windows lives. I eventually tricked it into installing on Drive C, but it was determined to live and die as a document.

Meanwhile, ACDsee installed exactly as it should. The Topaz and NIK filters installed perfectly and worked fine. While Corel was diddling around, trying to find a time to figure out how to make their application install, I had ACDsee working, with filters. Work was slow, but it was working. Which was more than I could say for Corel.

So I bought ACDsee.

And this is where words began to matter.

In ACDsee, every item you need to use is worded differently than it is in Photoshop — or for that matter, Corel.When I was a working technical writer, I wanted to set up a cross industry group to try and create a dictionary of words we commonly use in building applications for the high-tech industry. They said “Good idea” and moved one. Every other industry has a basic, standard vocabulary.

Electronics has a dictionary. Regardless of what kind of electronic item you work on, any electrician can read the schematic and know what each item is. They don’t have to relearn their entire vocabulary to use a new device. 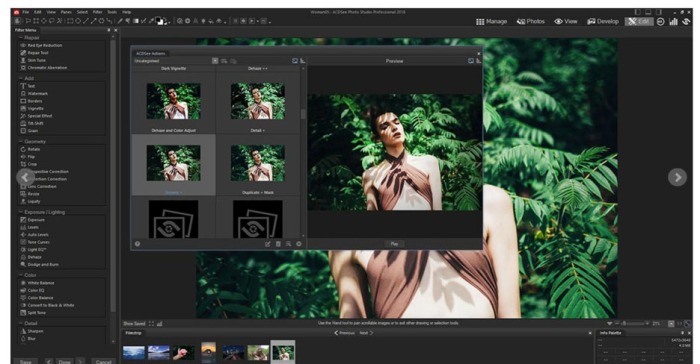 The thing is, there’s absolutely nothing in any of these applications I haven’t seen and used before. What’s different are the words describing them. Every item is listed in a category unlike other similar applications — and each of them not merely confusing. It’s downright abstruse.

I’m no longer in the tech business, but what I predicted happened. Without a standard dictionary, every application requires an exceptionally high degree of relearning.  Users are left working twice as hard to do something that ought to be transparent.

Words matter. Even though there’s nothing I can do about it, I resent having to waste the time simply figuring out what “geometry” means and why filters don’t contain my filters, but merely their filters. Meanwhile, my filters are actually located under “Tools” and subbed as “Photoshop plugins.” Even though they aren’t part of Photoshop and not made by Adobe. Apparently ACDsee’s developers decided anything that can work with Photoshop is a Photoshop plugin. Regardless of who makes the filter. I’m sure Topaz will be happy to hear that.

I bought ACDsee because I know it works, but I’m not using it. I’m using my old version of Photoshop because I know how. I realized finally that I will not use the new application until the old one breaks down and I can’t make it work.

And why not? Because the amount of learning I need to do to figure out where the simple things I need are located. No simple leveling tool — I have to use the perspective or distortion correction device. No easy way to save the photograph and exit. Two hundred questions about whether you want to save it and every other version of anything you did to it before you exit. I did actually complete fixing one photograph and it looked okay, but it was so slow and painstaking … It’s going to take a real poke in the ribs to get me to really use it. If they had named everything in some normal way, that might have helped.