David Brooks wrote an editorial in the June 2, 2017 New York Times called “The Axis Of Selfishness.” I just reread it. It really helps you understand where Trump is coming from. It makes his attitudes and actions a bit more comprehensible.

Brooks posits that Trump has a very dark view of humanity and the world. Trump believes that man is motivated solely by selfishness and self-interest. Life is merely a competitive struggle for gain and dominance at the expense of others.

There are only winners and losers. There is a limited amount of ‘stuff’ to be had and everyone has to try to get as much as possible for themselves. You are either on top or you are on bottom beneath someone else’s heel.

There is nothing in the middle. No area of compromise, no mutual interest, no sharing. No neutral zone where people coexist in peace, prosperity and equality.

This explains a lot. He is simpatico with brutal dictators because they share his philosophy of life. They are ‘winners’ who have come out with the most power and the biggest piece of the finite pie. It’s every man for himself, us against them, eat or be eaten, dominate or be subjugated in a dark world with no humanity or humanism. 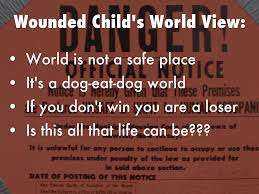 No touchy feely stuff like morality, good, selflessness, compassion, caring, or justice enter his world. It’s as if those qualities don’t exist for him. That really is sad. If he weren’t screwing up the entire free world I might feel sorry for him — another squishy emotion that he doesn’t recognize.

If this is how Trump sees the world, his behavior almost makes sense. No wonder he’s such a dick! No wonder he’s paranoid. No wonder he thinks all Muslims are out to kill us, that Western European democracies as well as Canada and Mexico are out to cheat us, that all non wealthy, non white Americans exist entirely to mooch off everyone else — and all liberals want only to destroy him.

No wonder Trump can’t let anything go — or stop tweeting. He has to be right and everyone else must be wrong. No wonder he has to demean others. In his mind, the only way you can lift yourself up is by denigrating others.

Brooks says the problem is that Trump’s worldview is self-perpetuating. If you act aggressively, competitively, and selfishly towards all others (people or nations), they will respond to you in kind. Thus your misanthropic attitudes are confirmed and the vicious circle of the worst humanity has to offer goes around and around.

The rest of us acknowledge the existence of greed and venality, but we believe social evolution pushes mankind to be cooperative, empathetic, idealistic, loyal, and righteous. We believe humanity is designed to strive for these ideals in our personal and public lives. We can see the wonderful world we can make if we work together and care for one another.

I don’t want to live in that world! Neither does most of America.

We have to hope the people who share our better view of life can muster the strength needed to banish Orange Voldemort’s darkness, and bring back America’s light. We have to fight to reinstate compassion, decency, justice, and right as the guiding forces for America.