I’ve always loved following the British royal family. Growing up, I read about the young Prince Charles and his siblings, who were my generation.

When Diana Spencer came onto the scene, my interest spiked way up. I avidly followed her romance with Prince Charles, their wedding, their complex and eventually toxic marriage and their divorce.

In fact, I got up at 5 AM with my one year old son and watched Diana and Charles’ wedding live in 1981. I watched it while talking on the phone with my close English friend, in London. I still remember the excitement of that morning! (NOTE: Most Brits loved Diana’s poofy wedding dress and most Americans hated it, me included).

What intrigued me most about Diana, was how she modernized the royal family, single-handedly. This was particularly true in her role as mother to two young princes. She broke with the stuffy, old-fashioned tradition of remote and stiff royal parenting. She insisted on being a modern, hands on parent. This resonated with generations of younger Americans and Brits. She instantly became a royal to whom it was easier to relate. And the whole world fell in love with her.

She also brought the royal family into the modern era of fashion. Her contemporary, chic and sometimes casual style endeared her to modern women everywhere. She wore some risqué outfits as well as blue jeans and tee shirts. No one could accuse Diana of being frumpy or stodgy, like the Queen. Diana became a worldwide fashion icon – something the royal family had never dreamed of in the past. 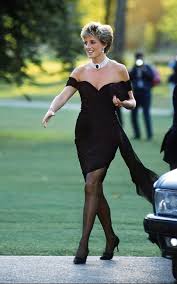 Kate Middleton continued Diana’s tradition of modernization when she entered Prince William’s life during college. Not only was she a commoner, but she lived openly with William before they were married. She was also photographed (and still is) going to the supermarket and walking her dog and doing other everyday chores.

Once she had children, Kate took them everywhere with her. She also took care of them herself, with the help of William, her parents and one nanny. She functioned much like other wealthy working mothers. She gives lots of interviews about her children and her experiences with child rearing. Her devotion to her kids endears her to pretty much everyone.

Her great style and fashion sense also add to her cache. She is always well dressed and chic, even when she is dressed down. And she is incredibly glamorous when she needs to be. I love her clothes and admit to scrolling through vast numbers of fashion photos of Kate online.

Now the modernization of the British monarchy is taking another big step forward with Meghan Markle’s marriage to Prince Harry. Meghan is not only a commoner. She is also an American, divorced, a working actress/successful career woman, and biracial! These are all firsts for the monarchy.

Meghan’s acting career has prepared her for her future life in the limelight. She is already comfortable with the press, she is relaxed about being photographed and interviewed and she is confident about being in the public eye. So she is ahead of the game right out of the gate. She’ll probably be as much of a royal fashion plate as Kate is, but she will probably be more of a media presence than Kate has been.

Meghan is also naturally informal and open, traits the press love as well as the public. She reportedly likes to hug people, something that royal protocol strictly prohibits! She was also inclined to give autographs, which is also a royal no-no. So Meghan will be taking the monarchy down an increasingly accessible route.

I know it’s not going to happen, but I wish that Charles would abdicate in favor of William when the time comes. It would be nice to jump right into the more modern branch of the royal family. Instead we will have to live through another twenty years of Charles and Camilla – a throwback to the stuffy old days of yore.

But we’ll still get to royal watch William and Harry and their 21st century marriages and families. Even if William is not actually King, he can still be king of our hearts!