FARMING ALONG THE RIVER – Marilyn Armstrong

It has been very hot for the past week. It rained here last night. Maybe an hour of pouring rain and it must have been very local since no one else even noticed we had any rain. But my flowers are much happier and I’m sure the air feels light.

Today’s a holiday, but tomorrow, I’m hoping the weather will cool down. It’s supposed to rain tomorrow. Not an hour, like yesterday, but a full day of downpour. After which, the heat should break along with the humidity and life will be a little better for those of us for whom breathing hot, sodden air is unhealthy. Not to mention unpleasant. 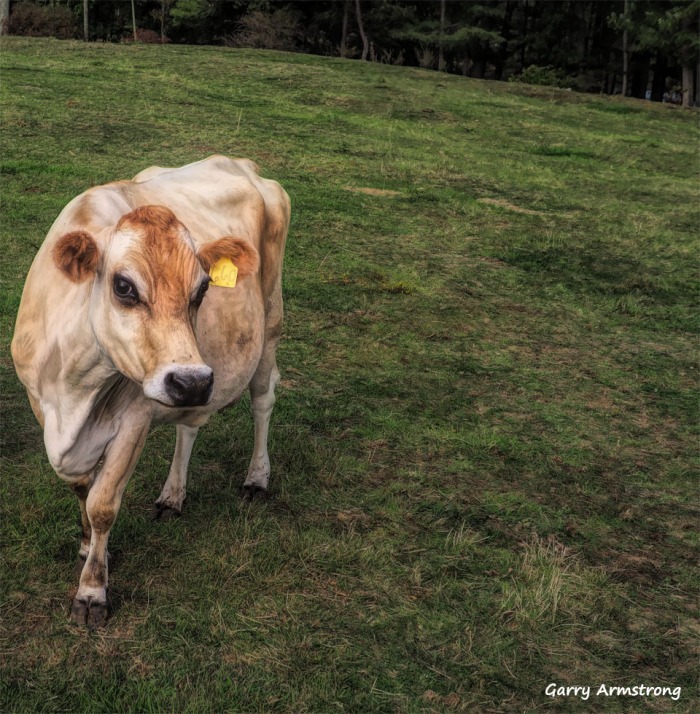 Around the corner, there’s a big farm. Really, it’s our neighbor but to get to it without driving, you’d have to walk all the way through our woods and come out the other end. We have no walking paths in our woods. Just many trees, rocks, ruts and the boroughs and homes of many small creatures. A few not so small creatures. Lots of hawks and a few eagles. Skunk, raccoon, coyote, foxes, fishers, bobcats and some spiders the size of dinner plates. Frogs. Mice.

We have rabbits. We used to see them lounging around the backyard. Not these days, though. Every since the Bobcats came to live here, they get eaten. Not only the Bobcats, either. Everything eats them. 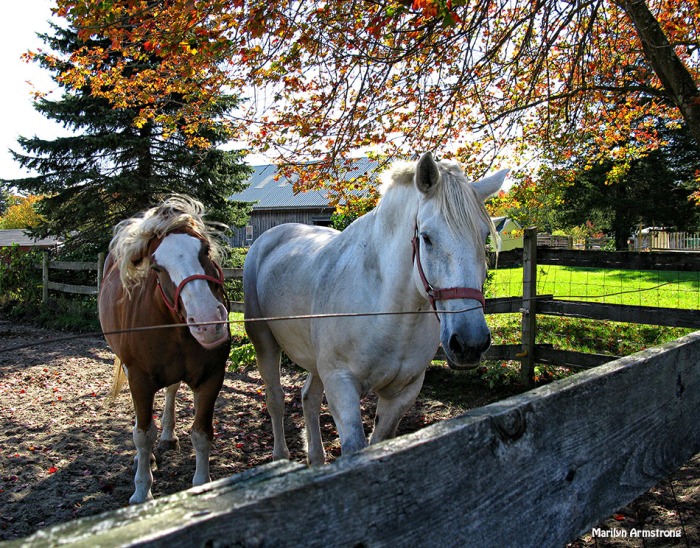 Rabbits seem to be the favorite lunch special at the diner in the woods. The squirrels have not disappeared, but they rarely come down from the trees. They are safe up there — mostly — as long as they stay up top. Even so, the hawks and eagles manage to grab them right out of their nests. Up top in the trees is still a better deal than being the Bobcat’s dinner.

Since the Bobcats came to live here, the chipmunks have virtually disappeared. They used to hang around our driveway and chatter at us. I’d tell them to “beat it” and they would argue with me. Chipmunks are back-talkers. They are worse than the dogs, though probably not worse than the Duke who is a bigtime back-talker. 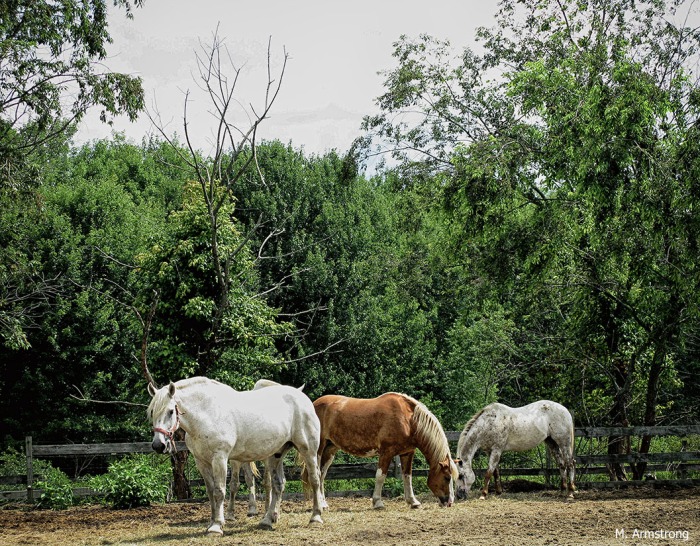 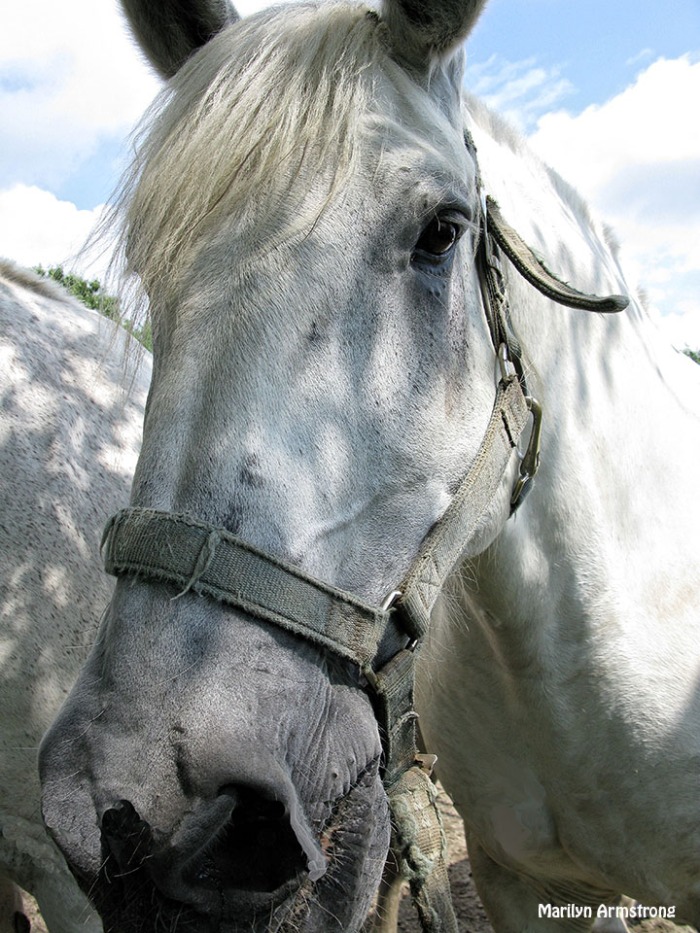 Duke can also jump the fence out of the yard and does so regularly. Normally, this would put me into a panic, but I’ve noticed he doesn’t go anywhere.

Just into the backyard to nose around. He’s a thrice-rescued dog and he knows where home is. He has no plans on leaving. Bonnie is more likely to go wandering than Duke. 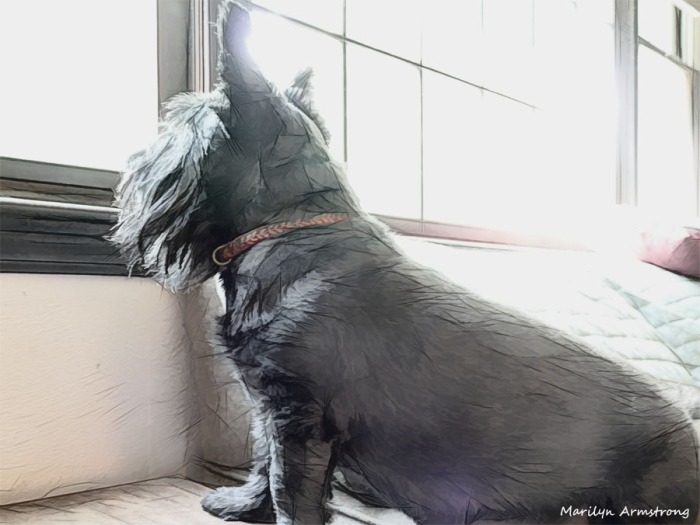 Gibbs is also a rescue dog and he’s not a wanderer, either. I think rescues have a strong attachment to home. They’ve had a hard life and they aren’t taking any chances! 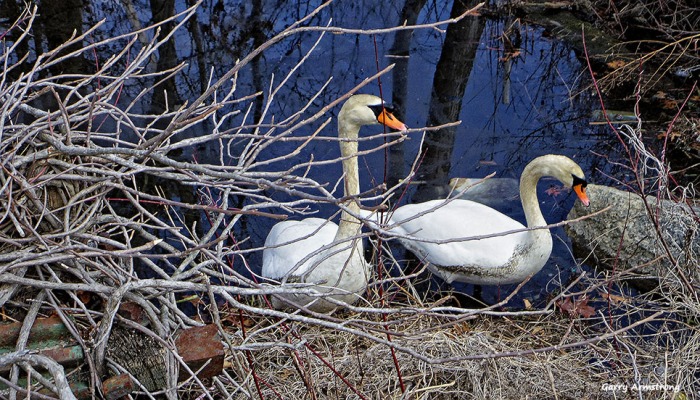 I thought I should mention that our local cows have pastures — several pastures — by the Blackstone River. If they graze on the south side of Chestnut street, they get the deep shade of the oak trees and breezes off the river, but if it’s REALLY hot, he lets them graze on the north side where there’s a little stream.

Calf wading in the stream

They love standing up to their hocks in the water. Turns out, cows like wading. I’ve never seen one actually try to SWIM and to be fair, the water’s not all that deep, but they will stand in the water all day look and look happy. What a nice farmer! He also feeds the wild turkey’s, so there are tons of them hanging around the chicken areas. 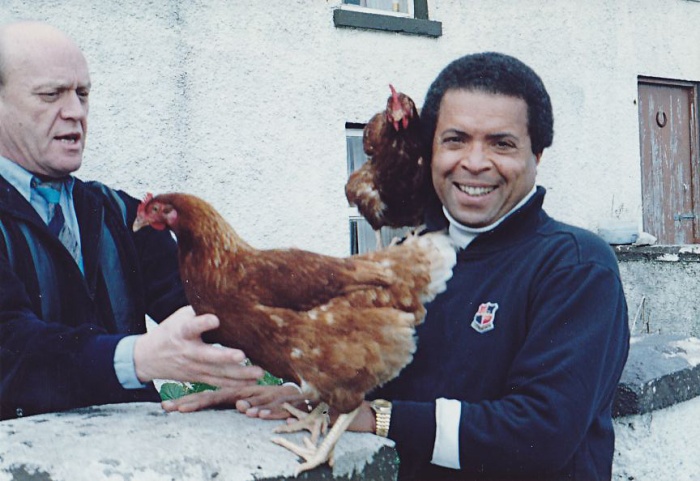 The chickens used to roam free, but I think between getting run down by cars and trucks and eaten by coyotes and foxes, he finally decided that some fences were in order. 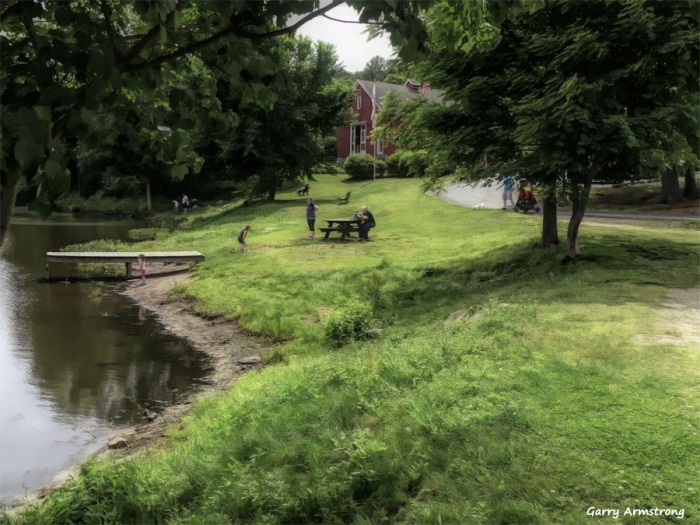 So now, they have huge fenced yards to keep the birds near home (and out of the road) — and keep the lurking predators away. We have coyotes, foxes, and fisher cats, as well as some pretty sizeable raccoons, eagles, and red-tailed hawks. Chickens look like lunch to all of them.

If it sounds like there is river everywhere, there is. I don’t think you can be anywhere in the valley and be further than a quarter of a mile from the river or one of its tributaries or streams or ponds. Nice for the wildlife, as long as we keep getting some rain. It also means we have a LOT of wetland and swamp. You have to be careful where you park or you’ll sink right into the bogs.

The rain last night was wonderful. One and a half hours of pouring rain to wet down the kindle-dry woods. Today the garden will be happy having gotten soaked last night!

Summer in the valley. The snapping turtles are growing fat. I’m sure we have lots of young herons, swans, and geese since it has been a good breeding year with plenty of water in the ponds. After two years of trees stripped by gypsy moth caterpillars, this is a peaceful summer.

I thought I’d mention this because someone mentioned it to me today. He got a snapping turtle on a hook in the river. He didn’t want to let the turtle go with the hook in its mouth, but he also didn’t want that hefty snapper to take his thumb off. Somehow, he got it done. I have to ask him how he did that. Those big snappers scare the wits out of me.