Since Donald Trump entered the political scene, we’ve had to deal with lies and lying on a daily basis. You could say that our society has become obsessed with lying.

At first the news media were reluctant to call Trump’s untruths, ‘lies’. They felt that the word was too harsh and possibly biased. But as time has increased the number, the frequency and the egregiousness of ‘untruths’ coming out of Trump’s mouth, the media has changed it’s tune. Now they call his lies, ‘lies’. So we hear people talking about lies and lying every day.

In this atmosphere, we watched one of our favorite movies again and saw it from a different perspective. The movie, from 2009, is called “The Invention Of Lying”. It’s a Ricky Gervais masterpiece. 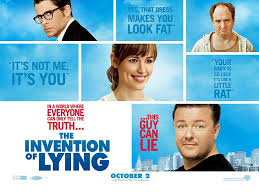 It couldn’t be more relevant to today’s culture of political lying. The movie has a very interesting concept. People in the movie’s world can only tell the absolute truth. They are incapable of lying, of saying anything that is not 100% true. They can’t even imagine the possibility of lying.

This leads to some interesting interchanges since everyone is brutally honest at all times. Examples of this phenomenon are: Secretary tells her boss he is a loser and she’s hated every day she has had to work for him. A waiter tells the customer “I don’t like you, so I spit in your food.” On a date, the leading lady tells the hero she won’t sleep with him or go out with him again because he’s not a good genetic match. She’s beautiful but he’s short, fat, and has a snub nose. She doesn’t want fat kids with snub noses.

A sign outside a nursing home says something like, “Depressing Place Where Old People Go To Die.”

Another side effect of total truth-telling is that there is no art, TV, theater or even novels. This is because art and fiction are forms of making things up. Saying things that are not 100% true. So the only entertainment is ‘readers’ reading history lessons on film. The history writers are each assigned centuries. They produce scripts depicting real events from that century. One popular movie was “Napoleon – 1812-1813.”

The hero of the movie, Marc, played by Ricky Gervais, suddenly realizes that he has the ability to say things that ‘aren’t’. He first uses his ability to lie to get money from his bank. He merely tells the teller that he has $800 in his account when he only has $300. The teller apologizes for the bank error and gives Marc the $800 that she now believes he has in his account. Whatever Marc said must be true, so it must be a computer error. 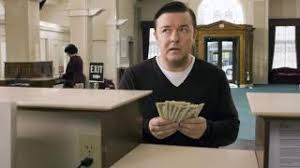 The movie ramps up the social commentary when Marc ‘invents’ religion. His mother is dying and tells Marc that she is scared. So, to make her less fearful of dying, Marc tells her that she’ll be going to a wonderful place where she’ll see all her deceased loved ones, she’ll be eternally happy and she’ll get her own mansion. Some hospital personnel overhears Marc’s conversation with his Mom and they believe everything he says.

The next day, there’s a huge crowd outside Marc’s house demanding more information about what happens when you die. Marc ends up inventing ‘a man in the sky’ who controls everything. He writes down ten rules about the man and the afterlife on two pizza cartons. It’s very interesting to see the changes in society and in the people once religion is introduced.

The genius of this movie is that while it’s a super high concept film, you really care about the main characters. You get drawn into the ‘love story’ at the core of the plot. The drama revolves around whether or not the beautiful and wonderful girl, Anna, played by Jennifer Garner, will overcome the superficial biases of the culture and marry her best friend. He’s the guy she rejected by saying that he would give her fat kids with snub noses. 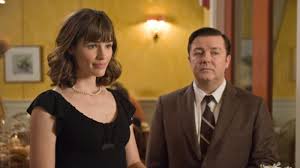 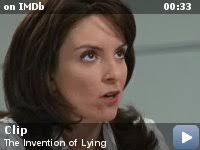 I highly recommend this movie. We’ve shown it to a few friends and they are all blown away. They thank us for introducing them to something so well done and engaging. I hope we can create a cult of fans for this overlooked and underappreciated piece.

I hope you’ll watch it! You’ll thank me too! Since we live with non-stop lies from our leaders, it’s refreshing to spend two hours with people who can’t lie at all!