Two years ago, I order 30 pairs of socks in all different colors and patterns. I realized, finally, that I was down to a bare two or three pairs and I wasn’t even sure they were real pairs, but they were at least more or less the same color.

Around the same time, I also bought a lot of underwear on the theory that we wouldn’t have to do laundry nearly as often if I didn’t run out of underwear. Oh, and I refilled Garry’s sock and underwear collection too. 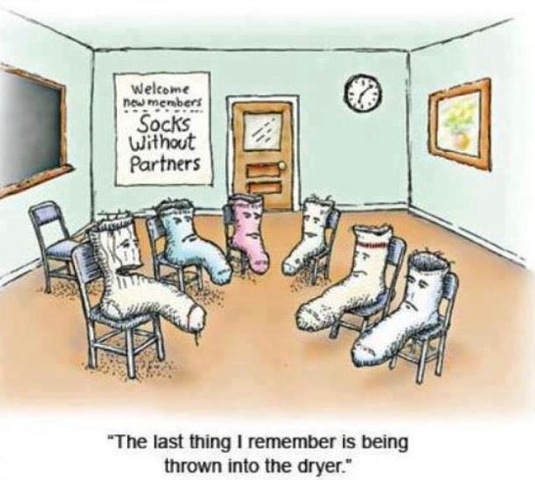 Yesterday, Garry did laundry. My 30 pairs of socks have shrunk to about half a dozen pairs. I swear to you not only am I careful to keep pairs together, but Garry is passionate about matching them up. And keeping them clean.

Which isn’t always easy because I wear them as slippers and have been known to go outside in socks … not always my best choice.

Nonetheless, I realized no matter how much I didn’t want to face the crisis, I had to buy more socks. I found socks on Amazon — 12 pairs for $14.00 and they are all exactly the same. Because I know. We all know.

Socks vanish. No matter how careful you are. No matter how hard you try to keep track of them, over time, attrition will chew at the edges until you have no more than a few days worth of socks in your drawer. You will search that drawer.

“Who took my socks?” you cry, but no answer will come to you. They are gone through the black hole in the universe (via your clothes dryer) into which all the single socks are eventually drawn. The mythical land or planet where a single sock can live forever. They are looking down on us and laughing. Because we persist in looking for them. Foolish humans.

Garry, despite my assurances that there is nothing more he can do, that socks will go missing regardless, is sure I’m accusing him of sock-knapping. He does not yet understand. There is nothing anyone can do. There are greater forces at work here than mere humans can control.

So this time, I’m ordering 12 identical pairs. As each sock disappears, I can wear it with another lonely sock. Variety is not the spice of life when discussing socks.