Home › Blackstone River › WITHOUT A PARTRIDGE IN SIGHT – Marilyn Armstrong

WITHOUT A PARTRIDGE IN SIGHT – Marilyn Armstrong

My vision isn’t as good as it used to be. I can see but only wearing exactly the right glasses which these days, is nigh unto impossible. I can get close, but never exactly right. I can read with no glass. Middle vision, I use computer glasses but right now, they are a bit too strong and I need a new checkup and new eyeglasses — for which I don’t have money.

Without sharp middle vision,  I can’t clearly see the LCD on my camera. If I wear my distance glasses, I can’t even read the dials on my camera, let alone focus a lens.

Pear in a tree

So I am dependent on autofocus. Which, fortunately, is a lot better than it used to be — depending on the camera I’m using and of course, the lens.

So here’s the story of the pears.

More pears in the tree

Garry and I are at River Bend Park. It is part of a long string of parks surrounding the Blackstone River, all loosely titled “the Blackstone Valley Historic Corridor.” One step to the left of a national park.

All the parks are linked by the river or the adjacent canal, or one of the river’s many tributaries. Then there are the streams, swamps, other smaller (and sometimes nameless) rivers, lakes, and ponds. This particular section of the park includes a big barn build during the 1700s on land that was a farm. Hence the name River Bend Farm.

I’m looking at a big tall tree which, as far as I can tell, is full of big yellow flowers. And then, while I was trying to find the flowers, I heard a “thunk.”

Thunk? Flowers do not make a “thunk” when they fall. Flowers are inclined to float gently to the grass. This “flower” hit the ground solidly. Realizing that I wasn’t looking for yellow flowers, I pulled out a small camera with a really long lens and eventually realized that all those big yellow flowers were actually bright pears. It was … a pear tree.

I took pictures. I was not sure I got any sharp ones, but I shot anyway. It turns out, I got more than a few and they are pretty good.

Later on, Garry said that he knew it was a pear tree because he narrowly avoided getting bonked on the head by a falling pear. 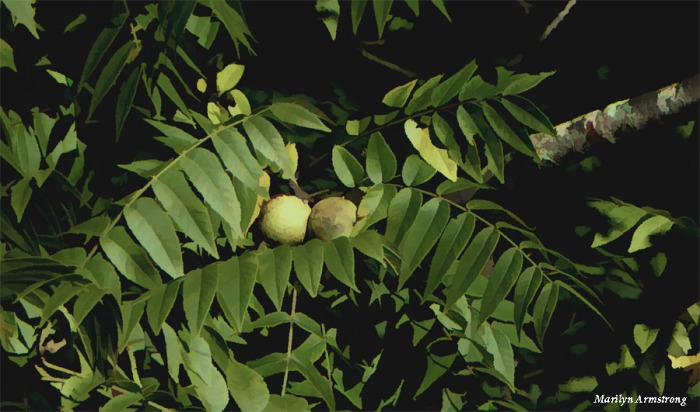 Funny about it being a pear tree because I used to have a huge old pear tree in my backyard in Hempstead. That was at the first house I lived in as a married woman. The pear tree was a cross between a Bartlett and a Bosc and produced the best pears I’ve ever eaten. It produced tons of them.

The neighbors all came by with baskets to collect pears. I still had tons of them remaining. I made pear pies, pickled pears, gingered pears and of course, we ate them. Despite that, there were bushels of pears remaining.

Pears by the river

In the course of events, we all learned a great truth. Do not sit under the tree when the pears are full-grown. Because one of those big babies — completely unripe and hard — falling from the upper branches could knock your head in.