Last night on the news, they announced that Sears was going out of business. Destroyed, they said, by the likes of Amazon.

In the course of last night, I ordered two things I needed — a raised toilet seat because I’m finding it really hard to get up from the very low seats in our bathrooms and a raised seat is a lot less than a new toilet. Later, after the nurse called with the results of our blood tests, I learned I was anemic, so I went back to Amazon and ordered a couple of bottles of Vitamin D3. I didn’t have to get out of bed for either order.

When I was a kid, everyone went to Sears. That’s where you shopped for the “big stuff.” Refrigerators, washing machines, shop tools. You always needed help because these are expensive items that you intend to keep for a long time. You want to be sure they will be what you want — within the limits of your budget, of course.

Meanwhile, sometime during the late 1980s, Sears decided to take a chip from the local department stores and eliminate human sales personnel. For love nor money, you couldn’t find anyone to talk to. At the same time, they substantially cut down on the items for which everyone had gone to Sears — large appliances — and loaded up on dorky kid’s clothing.

Considering that every store carried kid’s clothing but almost no one carried appliances, it was a baffling decision by The Suits who ran the place.

Since then, I’ve never had any reason to go to Sears. Not only do they not have what I’m looking for, but they have hardly any people working with customers and they’ve closed down most of their checkout counters. So did most of the other brick and mortar stores.

There was a time when you could go into a department store and someone would be stuck to you like glue, showing you where your size was on the rack and helping you find the shoe or the dress or the jeans you wanted. Then, one day, all these stores decided we could all fend for ourselves, like a herd of sheep without a shepherd, a dog, or even a fence to keep us from falling off the mountain.

From that point on, which by then was the early 1990s, shopping at a mall became a chore. They would have one frazzled worker supposedly managing multiple departments and you had to wait, often for as long as an hour for him or her to have time to answer a simple question, sometimes as little as “Where’s the changing room?”

Amazon didn’t kill these stores. They committed suicide. They thought that they owned us and we’d keep coming because what else could we do, right?

Along came Amazon. They might not have someone to help you find the item you were looking for, but you had all the time in the world to read the reviews, compare prices … and if something didn’t work out, they were (gasp) NICE to you! That’s right. Nice. Polite. Helpful. And they sent the item right to your door. No battling for a parking space and hauling heavy boxes through the lots.

Our little grocery store — Hannaford — is the smallest store of its type in town. They aren’t fancy. They don’t have a lot of variety, but they also don’t have extremely high prices. Often, their actual prices are lower than Walmart and much lower than “Stop n’ Shop.” If you want help, there’s always someone around to show you where the item is … and they will wait for you to make sure you’re all set before they go back to whatever they were doing before. They never seem to be cross about it, either. 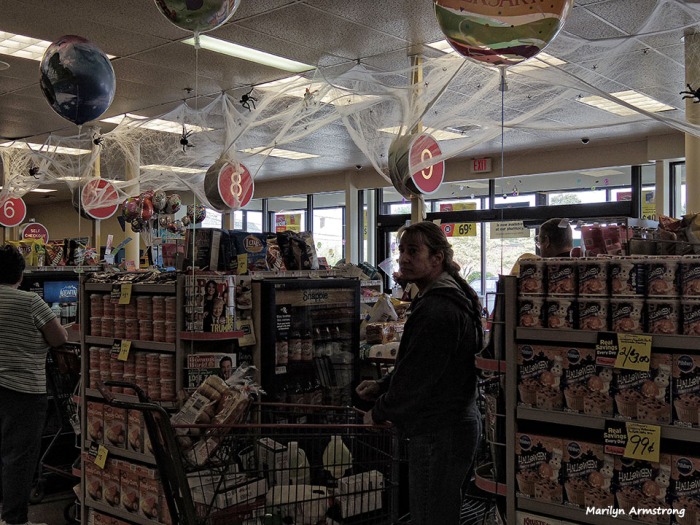 Not only are the nice to the customers, but they are also nice to the workers, many of whom have worked there for years. This has a side benefit of employing people who know something about their products and the store.

Amazon didn’t just join the market and destroy the competition. They found a big hole in the market — department stores who overcharged and acted as if customers were trivial. They made it increasingly difficult to find items and harder to pay for them. Parking lots got smaller to make room for more mall and around the holidays, they were a nightmare.

By the time Amazon loomed on my horizon, I had already made a big shift to buying more from catalogs and less from shops. It wasn’t even a big deal.

Today I bought my toilet raiser for $35 and two bottles of chewable D3 vitamins for $17.00. I wouldn’t have even known where to look for the raised toilet seat … and just one of those bottles of vitamins would have cost me the same price at CVS as I paid for two of them on Amazon.

I’m sorry that Sears is going out of business, but I’m not surprised. They stopped providing customer service years ago. Actually, it’s amazing it took them this long to crash and burn.

The irony is that I didn’t mind paying a little more to shop in a “real” store where I could get help and assistance, but I really minded paying more to get no assistance or help and a general attitude of surly indifference from employees.

I know working retail is hard. My son has worked his whole life (mostly) in retail. It’s hard work and many customers are not nice people. But then again, many of the workers aren’t nice either, so I guess it sorted itself out.

It all started because the shops decided to save a few bucks and get rid of their own workers and now, they are SHOCKED that the shoppers have gone elsewhere.

Our little local grocery store is always busy. The parking lot is constantly full and the checkout lanes are filled with people chatting with each other while waiting to pay. No one gets crazy when a line is slow because a new employee is learning the ropes.

They are nice, we are nice. Even though “Stop n’ Shop” offers delivery, we go to Hannaford because they offer human beings.