“This has to be one of the most surreal days in a surreal administration,”   CNN Anchor Jake Tapper offered this assessment, opening the late afternoon segment of his newscast.

Tapper was referring to rapper Kanye West’s bro-mance visit to the Oval Office today. Rambling and profane, West’s rant apparently left Commander-In-Chief 45 speechless,  a formidable accomplishment in itself.  The West-Trump bro hug was the perfect photo-op in a scenario that ventured where even Mel Brooks would not go. 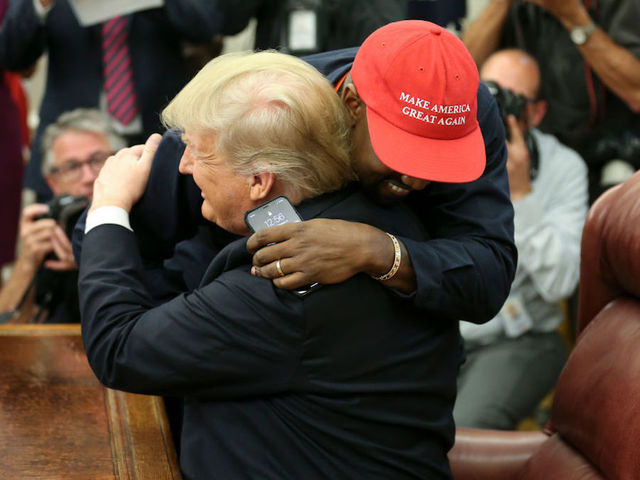 West, presumably speaking for some segment of the Nation’s African-American populace, had nothing but praise and atta-boys for the President who sat with a broad smirk on his face as West delivered rambling compliments.  On the surface,  it seemed like a  boost for a racially divisive administration with the midterm elections less than two weeks away. Kanye West, to be kind, is not generally held in high regard by people of color.   Music?  Yes.   Politics and all things concerning civil rights, NO.  It’s a given that Kanye West’s high-profile salute of Commander 45 will have “legs” and be on a continuous loop for GOP spinmeisters. It’ll be fodder for the late-night comics, but who’ll have the last laugh?

I wouldn’t be surprised to see clips of Kanye West, in his MAGA baseball cap, pop up frequently as GOP candidates shift into high gear for votes with the days dwindling down to a precious few.

It’s shrewd politics on a day when most of our attention is focused on Hurricane Michael’s devastating wrath.  Once the major newscasts wrap their hurricane coverage,  the Kanye West story will get lots of play.  It’s win-win for the administration trying to spin away from the residual anger and bitterness that surrounds Brett Kavanagh’s Supreme Court nomination.

All the Kanye jokes will play well in the Trump hinterlands where minorities are regarded as fools or tools whose collective cord isn’t long enough to reach the socket.

Here’s hoping the political reporters and commentators are shrewd enough to dissect the controversial rapper’s White House rapport for what it is.  A one-way love affair with between two mentally defective guys who will do anything for attention — with no real affection from the West Wing where they are probably snickering over their cheeseburgers and smoothies.

Yes, it’s a surreal day but it’s also a sad day.  Time for some encore plays of “Send In The Clowns”.