NEWS AS ENTERTAINMENT – BY ELLIN CURLEY

Something tragic happened to America’s news media in the early 1980’s. Before then, the news divisions of the major television networks were not expected to make money. They were considered to be a public service designed to give people the information they needed to be well-informed voters and intelligent citizens. At some point in the 1980’s, the news was suddenly expected to make a profit, like the other divisions.

News budgets got cut, investigative journalism, which takes time and personnel, went out the window. The emphasis shifted to what “sells” the news and gets good ratings.

The most trusted man in America during his career

The phrase “infotainment” got coined and the percentage of accurately informed citizens plummeted. The internet became a big source of news for many people, but the standard remained – give people what they think they want, not what they should know to make well-reasoned civic decisions.

Our news reporting tends to be ethnocentric. All forms of American news media report every word the president utters and every tweet he writes. Yet there is very little coverage, if any, of things going on in other countries which can often affect world politics and economics. This is what sells and doesn’t sell in U.S news.

Our news media also tend to focus on violence and sensationalism here at home, again, because this is what sells. Violent crimes in the U.S. are covered ad infinite – murders, assaults, rapes, police shootings, mass shootings, etc. Many of these are valid news stories, but so are the massacres, crimes against women and government sanctioned murders that happen daily elsewhere in the world and get little coverage.

Sports, celebrity and local government scandals are also wildly popular and omnipresent news stories. But I wish they were covered less and more was reported about the massive corruption in our system that allows Big Pharma or Big Food, insurance or oil lobbies, for example, to determine what drugs, food, insurance, oil, etc. we get and at what prices. These stories get some play but not with the frequency, enthusiasm and decibel level of the latest psychopathic murderer or morally questionable politician or media star. 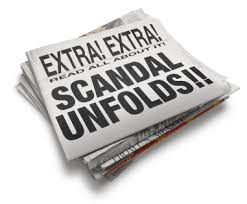 No one has the time today to read or watch everything out there purporting to be news and decide for ourselves what we need to know to understand what is going on in our country and in the world. I wish we could go back to the days when we trusted an impartial media to sift through the world news and honestly decide for us what was important to know.