This is all Fandango’s fault.

To be “tagged” for being talkative is pretty funny. I’m not nearly as talkative now as I was when much younger. When younger, I could talk the hind legs off a donkey. The only person I couldn’t out-talk me was my son, who could out-talk me in both Hebrew AND English, often spoken in a bizarre mixture that only he and his American and English-born kid-friends understood.

So blog-wise, who’s been talking lately? 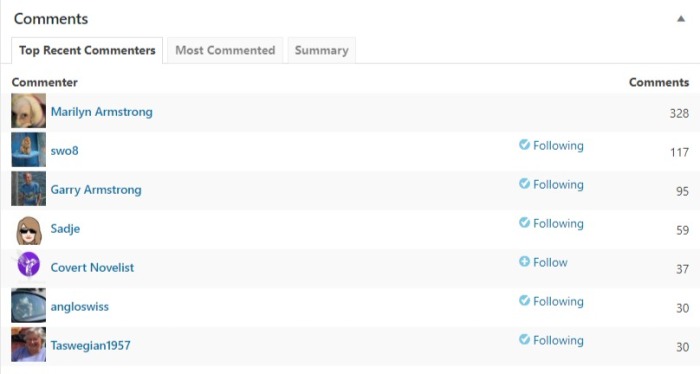 Turns out that other than me, which really isn’t talking because I’m just responding to comments, Leslie chats the most with my husband close behind. Sadje hits a tight fourth, with Covert Novelist, Mrs. Angloswiss and Taswegian not far behind. These stats go up and down from week to week depending on who is having a good week and who isn’t.

I’m not having a great week, but I feel absolutely required to answer all comments. I’ve been answering all comments since I started blogging and I’m so hooked into it, I don’t know how not to answer … unless I’m too sick to do it or just not home.

It’s way early for me to be writing. The gutter cleaners were here early and I had to collect the hysterical dogs. Believe it or not, people are afraid of these guys. They are all total wusses, too. The barking is just their way of letting the world know that SOMETHING IMPORTANT IS GOING ON AND I NEED TO LET THE WORLD KNOW. They do this in the loudest sounds they can create and for Garry with his newborn ears, this is a terrible sound.

So at 8 in the morning, I’m herding the canines into the house and as soon as I get one in, another one runs out. I finally threatened them with not getting a SINGLE COOKIE FOR THE REST OF THE DAY. I don’t know if they got the words, but they caught the severity of the threat — and in they came.

Then there were ladders and crunchy scraping noises in the gutters and me wondering if they ever did find the spigot because frankly, I can rarely find it. The one behind the house froze and burst a few years ago and Owen hasn’t quite gotten to repairing it. One of these days.

The guys left without leaving a bill, which never happens, so I called the office and he assured me that they’d send one via email on Monday, which is fine because tomorrow is the first of the month and we actually get some money. Although rapidly depleted by the endless bills, at least it arrives.

I’m pretty sure this chickadee could talk., but he can’t type so he doesn’t comment.

My husband is the biggest chatterer. I wish he’d save up the chattering and write something, but he loves the back and forth chatters on WordPress. It’s his favorite part of the experience. Writing for him is too much like work. He hates deadlines. He lived his entire adult life with deadlines diving at him from the sky and earth below. I cannot send him this “talkative tag” because he’d just look blankly at me and then ask me what he was supposed to do with it.

1  –  Let’s cross out Sadje because she’s already done it.

2  – SWO8, aka Leslie Martel — if you feel like chatting a bit? I know it’s not the sort of thing you normally publish, but if you feel inclined, here’s an opportunity to do something else. Just in case.

3  –  Covert Novelist — I find it interesting that it shows me as not following you because I definitely do and have for quite a long time, but I think it’s something about the .org versus .com areas of WordPress. You’ve got a .org site and I know you don’t show up in my list of manageable follower sites. Still, I bet you could find something to say! You’ve got a pretty good chat style, right?

4  –  Ah, Mrs. Angloswiss. You are my longest running correspondent and I feel like we are pals. If you didn’t live on the other side of the ocean and up a mountain no less, we could share breakfast toast and jam — and something hot. Please, feel free to write pretty much anything. I’m always ready to listen, until around 2 in the morning when I pass out cold for at least four or five hours.

5  –  And last, but absolutely NOT least, Taswegian. Aside from all other comments, I have learned a ton of stuff about how things are getting done — or more to the point, NOT getting done way down under. I was really surprised to discover it actually snows there. I thought it only snowed at the very bottom of the world (as in Antarctica) or on MY house.  Please feel invited to compose something for this (or not).

I consider ALL tag-along things as optional, so no one needs to feel pressured. Please do what you want to do and not one bit more.

That pretty much does it. I’ve got the doctor this afternoon. I hope something comes out of it other than more discussion to be continued. I’m beginning to think that while anemia may be the disease, lack of sleep may be what is really doing me in.