I collected dolls for years. Collecting is easy. Restoring is more of a challenge. Before I gave up collecting, I learned to restore my old dolls.

Portrait of an old doll.

Up front, let me say that I’m not crafty. I can’t sew, crochet, knit, or carve. I can’t change the cartridges in my printer. I can write and I can take pictures. I can draw a bit. And I can cook. Otherwise, I’m pretty much a washout as a craftsperson. But I collected dolls for years. If you collect, there are things you need to do yourself because even if you have lots of money, finding someone else to do them is difficult … maybe impossible. I learned because I had no choice.

This is the best work I did. After Ana McGuffey, I pretty much stopped collecting and promptly forgot everything I ever knew. Use it or lose it.

Composition was the material favored by quality dollmakers such as American Character and Madame Alexander before the 1940s when hard injected plastic became the material of choice. The changeover from composition to hard plastic was gradual. Some composition dolls were produced as late as the 1950s, though not many. 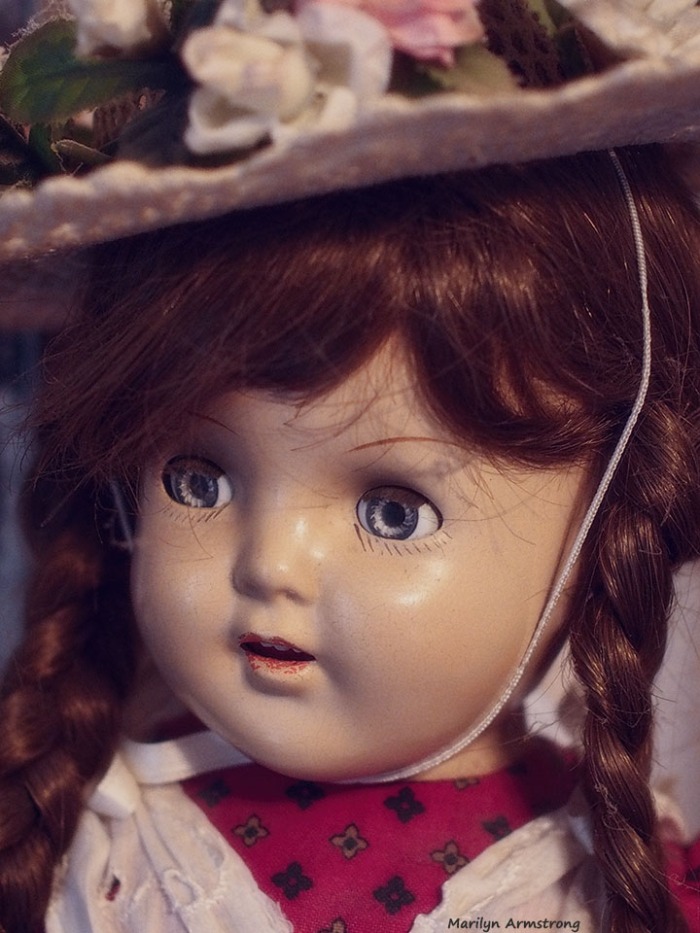 Composition is basically sawdust, glue, varnish, and paint.  It is a very good molding material, but it disintegrates over time. Dampness rots it. Excessive heat will destroy it. Time will have its way with it. Many dolls I love are old composition dolls. Finding these dolls in pristine condition can be impossible. If available, they are costly. Lacking money, I decided to learn to fix them. Old composition dolls in a state of deterioration are not difficult to acquire. If you can repair them yourself, you can get rare dolls for short money … but you will invest many long hours of yourself.

Ana McGuffey (of the reader of the same name) was one of Madame Alexander’s most popular character dolls for decades, from the 1910s through the 1940s. Although her face changed with the times, she always had her hair in braids. She wore a pinafore with a floral print dress. Stocking and buttoned shoes.

I finally got a 20″ Ana McGuffey. Half of each foot was rotted away. The paint on her face was chipped and faded and her wig and clothing were gone. She was in pieces and needed restringing.

I replaced her feet by modeling them using a clay-like epoxy material. This stuff is used for modeling all kinds of stuff. It’s difficult to use but forms a very hard, resin-like substance when it dries.

I restrung her, repainted her face — many failed attempts before I got it sort of right. I found a wig that looked like her original, though not the same material.

Her original wig was made of mohair. While you can get mohair wigs for restoring dolls, they are frightfully expensive and not particularly durable. I also don’t like the way they look, so I went with modern polyurethane. I made the dress and pinafore. This is not an area in which I excel, but no one was making clothing for this doll. It was me or no dress. I could easily get dresses that would fit her, but they wouldn’t look like her original clothing. I wanted Ana to look close to her original.

She also needed a flowery straw hat and I’d gotten pretty good at buying plain hats and decorating them. I found the stocking and shoes that sufficed, though they weren’t quite what I wanted. I haven’t mastered making shoes, but all things considered, I’m proud of this piece of work.