I really related to this story! And I thought you might enjoy it too. Oh, the cleverness in the animal kingdom. We think we are so smart but sometimes, I really wonder.

I lived at home during my first year of graduate school saving money by commutable proximity to the University of Iowa. It was an interesting experience. The redefinition of my relationship with my parents was a little bumpy.

I poured ice cold water on my mother in the shower one day, no doubt trying to recapture some of the fun dorm life with my college mates. Mom was not amused. My dad found out where my sometimes boyfriend lived and felt it was ok to stand outside his window yelling “Karin I know you are in there.”

But once we had our “come to Jesus” on that topic things went a little better. I also think it was that moment when I grew up and decided I should get a job and my own apartment in Iowa City.

I digress. This is really the story of animal life and the amusement that often comes from human interaction, underestimation of the cleverness of wild creatures, and their symbiosis with our larger world.

Our beautiful home in Cedar Rapids, Iowa had been a run-down, dark, very boxy colonial when my parents purchased it. By the time my mother and father were done with it, a two-year process, it was a light, modern, flow-through home with all the amenities required for luxurious family living with three daughters.

It was situated in the woods atop a large bucolic gully. This was fantastic as it meant that my dad had no lawn to mow. My mom, being an opportunistic feminist, has never pumped her own gas, let alone operated any type of lawn machinery. She uses her feminist views to simultaneously sit atop a “little girl on a pedestal” throne whilst insisting that just because she is a woman, she shouldn’t have to do all the traditionally female tasks. 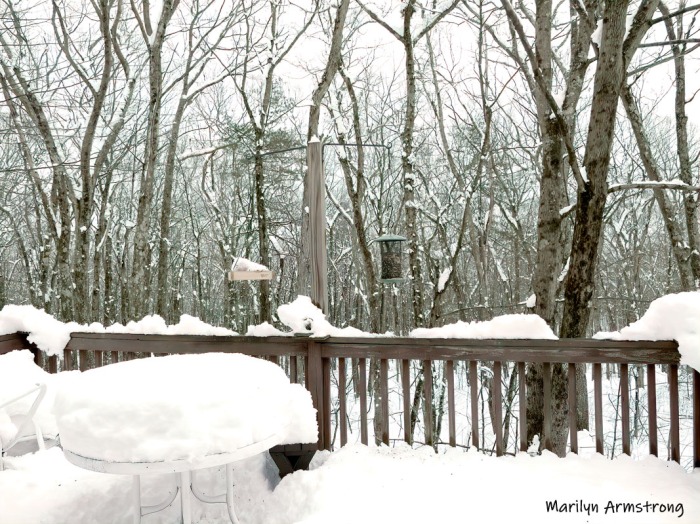 In short, she made my dad a slave to her every whim, including attempting to orchestrate the nature outside for her viewing pleasure.

My parents are both very good designers.

In our home, where solid walls used to be, a row of floor to ceiling glass doors and windows lined the entire rear of the home, offering panoramic views. A patio was constructed by my dad and my mother purchased and ordered the placing of multiple bird feeders for her viewing pleasure of year-round bird frolicking. Her favorite bird feeder was an oblong, cyclonic, ceramic, cyan, Scandinavian, seed-filled feeder with a lid at the top and holes and perching sticks at the bottom. In order to fill it, the douli-shaped lid slid on the two hanging ropes and was supported by the friction of the small ceramic holes against the rough wool twine.

In winter especially, my mother made it her mission to keep this particular feeder full. She enjoyed watching the birds flutter around it as much as she enjoyed ordering my father to fill it. During this year at home, when the Iowa winter was in full bloom, the barking began.

“Larry, did you buy bird seed for the Scandinavian feeder?” (Because everything is more important and better when it is labeled “Scandinavian”.)

Before the vowel of the known answer came back “no,” my mom was already on him.

“You go to Menards every day, why can’t you remember to buy my bird seed! And get the kind that has such and such, blah, blah, blah and this and that. NOT the kind that you got last time! I like the kind that is multicolored so that when it falls on the ground it is pretty. “Laaaarrry, are you listening to me????!!!!”

“Yes, Diane!” would come back just as the door to the garage slammed. I listened to this with detached amusement for several weeks. So I barely noticed when the tune stayed the same — but the lyrics changed. The new chorus was “Larry, did you fill the feeder? It’s empty again! I swear you didn’t do it!” 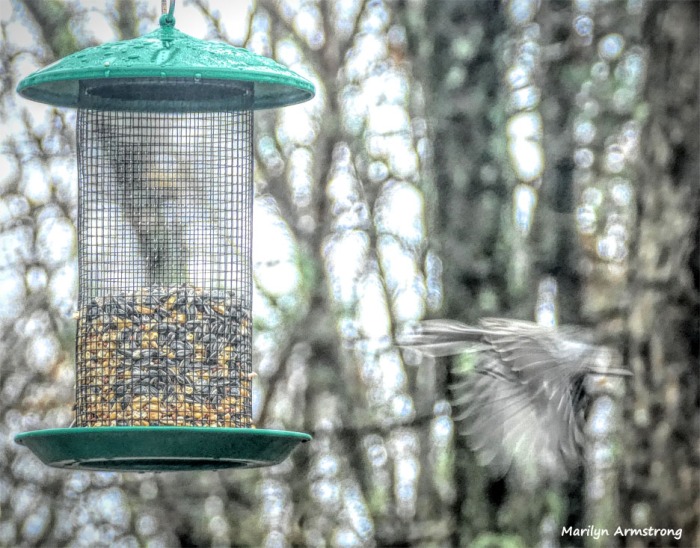 This was followed by the drumbeat of slamming pots and pans and the response “Diane, I filled it! I’m halfway through that bag”.

“I don’t believe you! Why is it always empty? I haven’t seen any birds all winter! You’re lying to me!!!!”

“Diane, why would I lie to you? Do you want to see the bag?”

“Don’t you bring that dirty bag in here!”

“Do you want to watch me fill it?” He would grumble unintelligibly while traipsing out in the subzero temperatures with said bag.

Not a raccoon, but close enough!

This went on intermittently in the early winter weeks and was thankfully interrupted with the new barking orders in preparation for the Scandinavian Advent and Scandinavian Christmas celebrations. But in early January, I heard the familiar call and response continue. As daddy’s little girl, I wanted to defend my dad. But in truth, I knew that he often lied to my mom and I had other things to think about.

Until one morning on my way to class …

As I walked towards our mudroom to retrieve my shoes, coat, and purse, my peripheral vision caught a large, darkish blob moving on the patio. It was sufficiently disruptive to my brain that I froze. Instinctively I knew it was an animal and any sudden movement could render the thing gone before I could ascertain what it was. I slowly turned and was able to fully observe a delightful little comedy.

Precariously hanging with the use of two back paws from a tiny single branch was the fattest raccoon I have ever seen. He (don’t ask me how I know it was a he; I’ve had far too much contact with raccoons at summer camp and knowledge I wish I didn’t have) had one front paw in his mouth and one front paw inside THE bird feeder. He was scooping out and eating the multi-colored feast as fast as he could swallow.

I thought to myself, “Oh, that is funny. Dad didn’t put the top back on the bird feeder.”

I watched Mr. Fat Racoon steal the feed as the little birds on surrounding branches stared unblinkingly for the few and far between scraps which fell to the ground through the little bottom holes. I glanced at my watch and debated if I should continue to observe the scene and risk being late to class.

I even, briefly, thought of opening the door and chasing the raccoon away so the birds could have their food. But my previous encounters with raccoons made me think twice about that foolish notion. I’m not sure why I didn’t just bang on the window which would probably have scared him away, but I think it was the curious and mischievous nature that I share with the raccoon which made me continue to observe, amused and statuesque.

When the little paw could be seen attempting to find more feed from the open holes at the bottom of the feeder, the raccoon put both front paws to his mouth, licked each digit hungrily and then did something I didn’t expect. 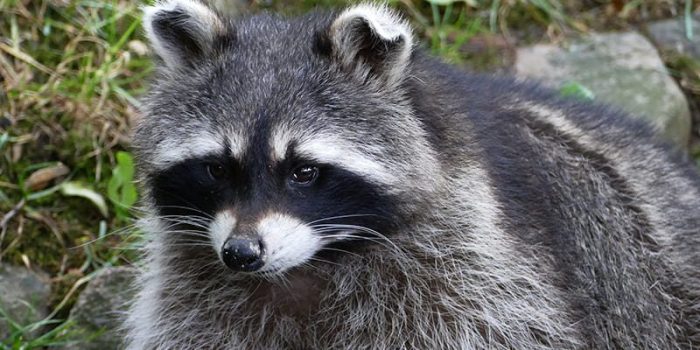 With his two hands — sans opposable thumbs — he held onto the opposite sides of the lid and slid it down to its rightful place atop the feeder, adjusting it until it was even. He looked at his work, nodded to himself and climbed up the tiny branch which had bent 180 degrees from his weight. He then proceeded to climb down the tree trunk and sauntered through the brush displaying his hindquarters to me like a woman comfortable with her hips.

When I next heard the “Larry, did you fill the bird feeder?” opera, I smiled to myself, shook my head and envisioned that animal disappearing into our woods. It was several decades, and long after that house was sold before I told the tale one night at dinner …