Harking back to yesterday’s long discussion of ARE YOUR VALUES WORTH A SONG AND A MOVIE? – Marilyn Armstrong which was based on Fandango’s Provocative Question #18:

Man (as opposed to a woman) should not lead a nation. Men are unsuited to the task. A man can be seduced by the size of a breast or beer.
A woman cannot.

A Talmud Legend relates the remarkable tale of how Alexander the Great searched for and found the gates of Paradise on Earth. Upon his appearance, however, he was not greeted knowingly by the Guardian of the Gate. The story reveals that even the most powerful, well-known or ‘great’ men need to be humbled, just like all of us on Earth need to be.

The legend goes as follows:

Once arriving at the gates of Paradise, Alexander the Great knocked persistently on the doors and demanded to be let inside. An Angel finally came calmly to the entrance and asked ‘Who is there?’

Alexander boldly announced, “It is I, the Great Conqueror and Lord of the Earth. Open the gates.” The Angel (to Alexander’s surprise and disappointment), said “We know him not. This is the Lord’s gate, only the righteous enter here.”

Incapable of persuading the Angel to allow his entrance, Alexander the Great prepared to go. Unwilling to leave the gates without some sort of token for his accomplishment for at least discovering the location of the abode of the just, he bravely asked the Guardian of the Gate for a gift. Granting his wish the Guardian gave him a small valuable item and said, “Take this, may it prove useful unto thee, and teach thee wisdom, more wisdom than thou hast acquired during thy ambitious expeditions and pursuits.” 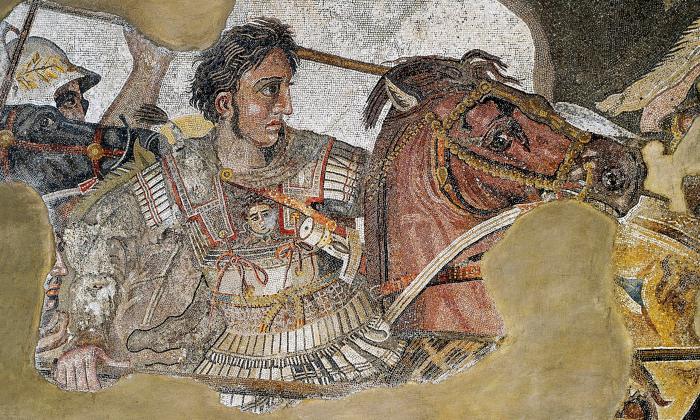 Realizing the gift was nothing more than a piece of bone, Alexander the Great was angered and threw it down to the ground. An accompanying wise and learned man hastened Alexander to reconsider the value of the gift from the abode of the just and offered to weigh it upon the scales. Alexander allowed the wise man to do so. On one side was placed the small fragment of bone. The other side was filled with gold. No matter how much gold continued to be placed upon the scale, the fragment of bone outweighed it. The more gold put onto the scale, the lower the bone sank.

Confused, Alexander asked what could outweigh the bone. The wise man proceeded to show him and covered the bone with dust from the ground. Instantly, the side of the scale with the fragment flew up.

It was realized, “The bone was that which surrounds the eye of man; the eye of man which naught can satisfy save the dust which covers the grave.”

How, then, can a MAN lead a nation when nothing can satisfy him except his own grave? Beware the greed of man. Beware man and his hormones, his endless need for dominance, his demands for power and proof of his superiority. He will never be enough. He can never have enough.

Beware the creature who is a man!