Home › Ellin Curley › THE CURLEYS OUT WEST – BY ELLIN CURLEY

THE CURLEYS OUT WEST – BY ELLIN CURLEY

Tom and I took a ten-day trip out West to visit our daughter, Sarah, in LA and to see some of our old friends.

In LA, we got to experience some elements of city life that we miss out on in the woods where we live in Connecticut. We used grub Hub to order dinner from a local restaurant that we were too lazy to go to in person. The food arrived promptly and still warm! What an invention!

I spent an afternoon out with Sarah but she had an evening class so I had to take an Uber back to her house by myself. I’d never used Uber before and I’d heard horror stories about Uber drivers kidnapping women and selling them into sex slavery.

At my age, that’s not in the cards for me, so I bravely got into the Uber car. The very nice driver drove me through the scenic hills of LA for over an hour. I got to see some of the most beautiful and expensive houses up in the hills – some literally on stilts! It was a lovely drive.

Fancy house in the hills of LA

Houses in the LA hills

We also experienced something totally ordinary to us but mind-blowing to LA residents – rain! Out there they get a rain shower every once in a while but never downpours or all day affairs like we get all the time in New England. They are more familiar with droughts and wildfires than days of non-stop rain. It had rained all week when we got there. The LA river is usually dried up and is used by skateboarders (it has a concrete bottom and curved walls) and film crews to film chase scenes. When we were there, there was an actual river flowing through the city!

Rain in LA (with an add for cannabis cookies in the background).

Dog owners were freaking out too. Apparently, LA dogs don’t like rain any more than their masters and when it rained all day, they had to go out and get their feet wet. This created a major crisis because dogs all over LA were balking and refusing to go out. So dog owners tried to adapt and I saw dogs dressed in rain coats and doggie galoshes walking around town. My dogs wouldn’t wear booties – they’d sit down and chew them off rather than take a step with them on. The LA dogs are either well-trained or total wusses. 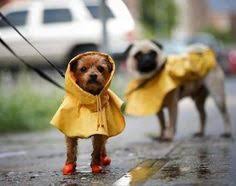 While in LA, we went to the local weed store, where I was not allowed to take pictures. It was awesome! Counters and counters of products in fancy packaging. It looked like the make-up counters at a department store. There were all kinds of edibles, from mints to cookies, candies to brownies, even brand named candies and cereals made with cannabis. They had oils and plants and all kinds of smokeables, including the new craze, vape pens.

The personnel at the shop were very friendly and acted like the ladies at make-up counters, asking you what you wanted, telling you about the different samples so you could find the perfect product for your needs. 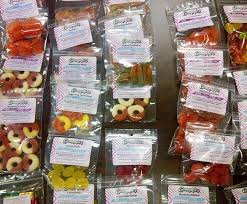 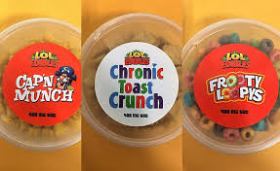 Tom was thrilled to be surrounded by all kinds of legal weed. He loved seeing all the weed shops dotting the streets of LA and I loved the huge signs for cannabis cookies all over town. I was also impressed by the fancy liquor stores that you could find in the aisles of the local supermarkets. Nothing like that in Connecticut. Here you have to go to a separate liquor store to buy booze, not the one-stop shopping you get in LA.

This was just the Whiskey section in the supermarket!

One of the perks of going to LA was that we would get to see some old friends. One couple, Gary and Beth, moved from Westchester as soon as they retired, about two years ago, to be near their daughter and five-year-old granddaughter. They spent the entire two years looking for a house to buy, but in LA houses go quickly and there is often a bidding war that raises the price above the asking price.

If you don’t make an offer within the first day the house is on the market, you’re screwed. Gary and Beth lost two houses this way but eventually found the ideal place, on their daughter’s street, literally six houses down from her!

They couldn’t be happier though their house is small and a big change from their spacious Westchester home.

It was great to spend time with these old friends and I got to see an even older friend. Tom has known Gary since college, but I have a high school friend, Susan, who lives outside of San Diego. We met at a restaurant in Newport Beach, halfway between Susan and Sarah.

Susan and I graduated high school together in 1967 and we kept up into the late 1970s when we were both young marrieds in New York City. But then Susan and I lost touch until two years ago on Facebook. We started emailing and we were thrilled to get to see each other in person again after 40 plus years. 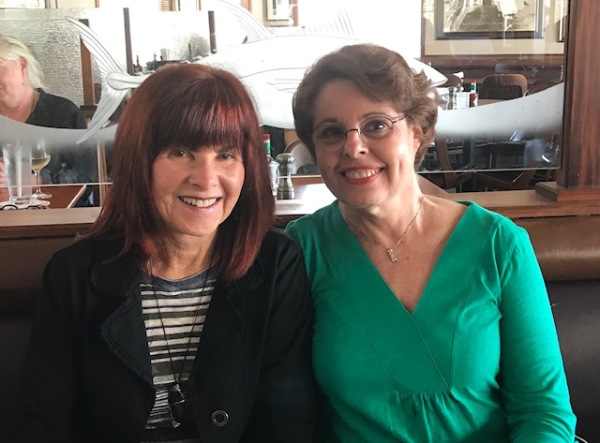 Susan brought her husband of 45 years, Jeff, and I brought Tom and Sarah. We all hit it off amazingly well and if we lived near one another, we would be the best of friends and would see each other all the time. Instead, we are going to schedule monthly phone conversations so we can stay in touch in between our annual visits to LA.

The next leg of our trip also involved old friends. Another college friend of Tom’s, Marc, and his wife, Rachel, moved from Long Island after retirement four years ago to Portland, Oregon. One of their daughters lived there and now the other daughter moved there and is having a baby, so they couldn’t be happier. They lived in a suburban area in New York, a long drive from the city where all the action is.

So they are over the moon to be right in the middle of Portland’s lively cultural life – lots of art, music, and theater going on 24/7.

Marc and Rachel can now go to concerts, openings, and shows all the time and they are having the time of their lives. They can easily walk and bike to many parts of town so they are not dependent on driving like they were most of their lives.

Portland townhouses like the ones our friends live in

They did drive us all over town though, so we have a good feel for this lovely city. Portland has a social conscience and a love for the environment. It is artsy and very progressive socially, politically and culturally and is often referred to as a hippie town. Weed is legal in Oregon and recycling is God – even the airports have multiple recycling bins. They are aggressively trying to deal with a large homeless problem, which has been a thorn in their side for several years.

The food in Portland, like in LA, is much healthier and they have local produce available all year, unlike the east. I ordered two quinoa salads that were the best I’d ever had. There were vegetarian options wherever we went and the salads and fresh vegetables were amazing. I could eat healthy and delicious everywhere, even at diner style places – I didn’t have to ferret out special restaurants that catered to ‘healthy’ options.

So we had a very western experience in LA and Portland and a great time with family and friends. It’s good to be back home with our dogs, who missed us so much, one of them dug up our carpet in the closet.