Tom’s brother, Todd, came for a visit with his dog, Houla, a Catahoula Leopard Dog. She’s only fourteen months old so she’s still a puppy, with puppy energy and a puppy’s desire to play constantly with my two, older dogs. 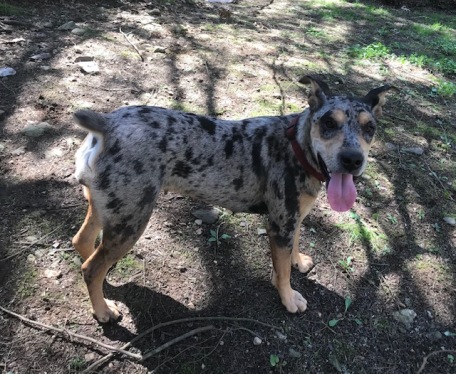 Houla outside, looking for trouble

My three-year-old dog, Remy, played with Houla a lot and the two of them chased each other around the yard at top speed. What’s surprising is that my nine-year-old, Lexi, also played with Houla. This is great because it gave my otherwise couch potato dog some exercise. So the three dogs got along fine, unlike Houla’s younger days when we constantly had to intervene to break up overly aggressive or enthusiastic wrestling matches. 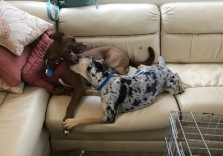 The problem is that Houla discovered a way to get out of our fenced in backyard. We have a tall, reinforced fence covering a large area around two sides of our house. Our dogs have not breached the perimeter for years. Remy found a hole in the fence when we first adopted her but has not found another way out since we plugged that hole. Apparently, she just wasn’t looking.

One day we realized that Houla was not in the room with us and we went looking for her. She wasn’t downstairs and she wasn’t upstairs so we went out to the backyard and called her. She instantly appeared, happily wagging her tail at us, from the outside of the fence. We brought her back inside and in short order, she was out again.

Houla outside, looking for trouble

We had to figure out how she was getting out so we all took turns watching her when she went out. After a very short time, she made a beeline to a spot in the fence and started digging and prodding the fence with her nose. Houla had found a small area of fencing that had a hole on the inside, which Houla made bigger. Then she managed to pull on the fence with her teeth and dislodge it from the ground so she could wiggle under it and out the other side. 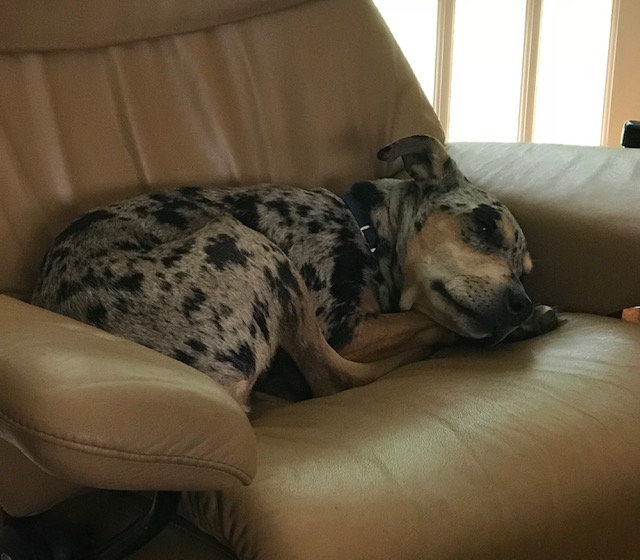 Houla in a rare quiet moment

This was the beginning of a two-day battle of wits and wills between Tom and Houla. Tom started by putting logs up against the loose part of the fence, but Houla just pushed them aside and escaped under the fence again. Tom then put a large garbage can on the outside of the fence and rocks and more logs on the inside. No problem for Houla.

Tom’s early attempt to stop Houla from getting out

Tom was frustrated and kept piling more things on the trouble spot. Each time he was sure that he had come up with something that Houla couldn’t possibly get around. His confidence was adorable, but he was always wrong. He even used stakes to keep the fence attached to the ground – to no avail.

Another cute photo of Houla as a younger puppy

To add to the problem, when Houla got out, she found a large mud hole to splash in and kept reappearing wet and dirty at the outside of the fence. We had to hose her down and dry her off before I would let her back into the house. 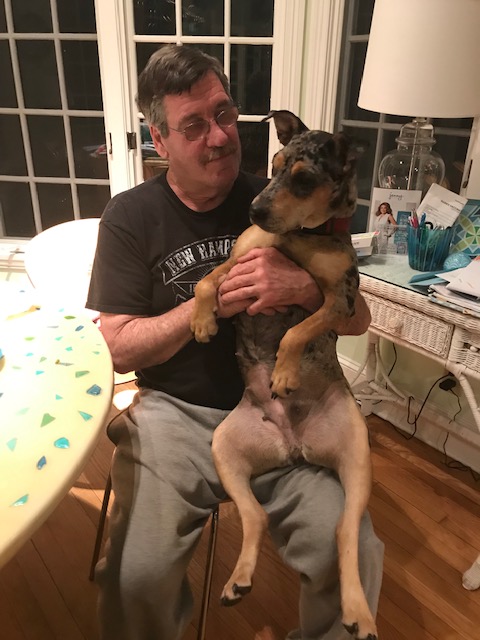 Now things got serious – except that I kept laughing at Tom each time he’d get outsmarted by a dog. But we couldn’t all leave the house at the same time because while Houla was adept at getting out, she couldn’t get back in and we didn’t want her wandering out to the road or getting lost in the woods.

Finally, Tom pulled out all the stops. He put a heavy bucket of salt from the winter on the outside of the hole and blocked the inside with an even heavier metal ramp that we use to get the dogs on and off our boat. Success! Houla has gone outside and poked around her escape route but has not managed to get through again. 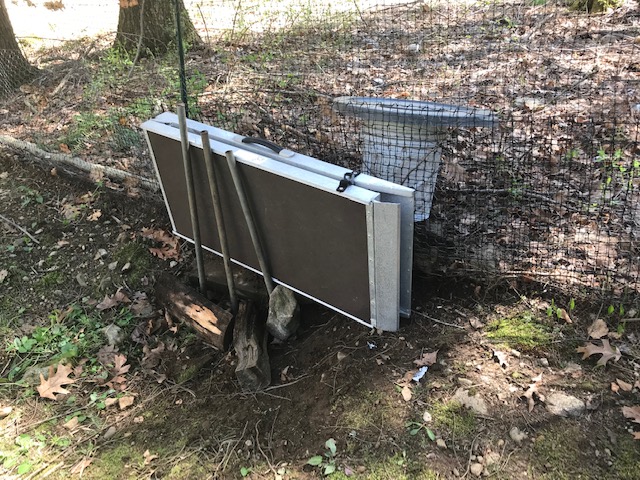 Tom finally managed to plug the hole in the fence