FLOWERS AND GETTING LOST – Marilyn Armstrong

It was a gorgeous, perfect spring day today. Warm and full of bright sunshine. As we left the house this morning (it’s a 2-hour drive into Boston), I noticed that we had squirrels glued to both feeders in the back.

I would normally have gone back to the deck and chatted with the furry feeders, but I was wearing my good clothing.

And there was no time for one of those me versus squirrel conversations. 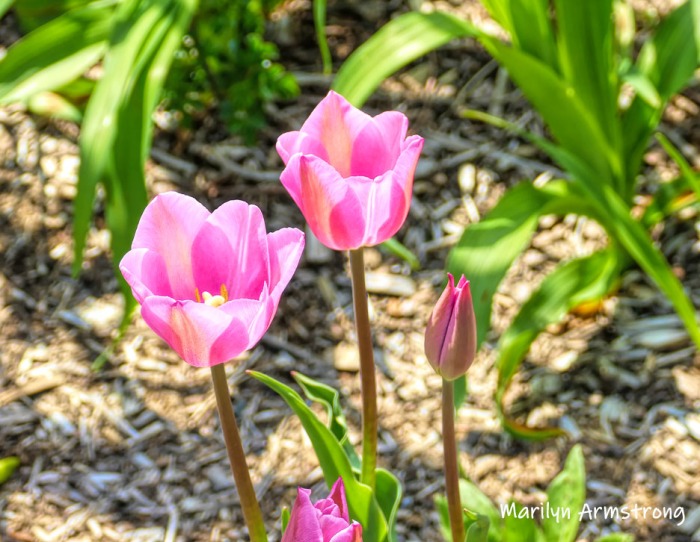 I should mention these are pretty much one-way conversation. I talk. The squirrels give me the squirrel eyeball, so I talk some more, and they go back to eating. Eventually, I will open the door, step onto the deck, and stare at them. They then move a little bit — from the feeders to the railing. And stare back at me.

I can hear them thinking “And what are you gonna do about it, huh?”

Magnolias and new leaves along the Mumford River

I quite like squirrels, but I feel that by the time we are approaching midday, they should go back to being tree squirrels and stop being deck squirrels. Is that too much to ask?

We had to leave. It was going to be a long drive and traffic in and out of Boston is heavy. We were 100% sure to get lost, even though the directions appeared to be simple. There’s construction on 146, too. Of course, there has been construction on 146 for the past 19 years, but there’s more now that it has warmed up.

Snowballs along with the steps in the park

It took us almost 2 hours to get there — and we got totally lost in Boston. So did everyone else. As a result, the memorial began an hour late and ended even later. So it was a really long day.

Since we bought our GPS (maybe 2 years ago?), they’ve redesigned almost all the major roads in Boston and completely rebuilt the seaport area. The last time I was there, it was mostly vacant lots and empty warehouses and a few party cruise ships. So our GPS can’t find anything. Moreover, the directions which we got from the hotel (via Google) said to get off Route 93 at Exit 20, then follow the signs to the Seaport Cruise Terminal.

Snowballs and a wooden bench

Except there were NO signs. We wound up at the airport. We did a couple of loops at Logan, including a round trip through the “Return your rental car here,” except we were in our own car and we couldn’t find anyone who knew how to find the Seaport Hotel.

Massachusetts is infamous for NOT putting up signs. I don’t know whether we are just too cheap to pay for signs, or we assume if you don’t know where you are, you shouldn’t be there.

The park at the Mumford Dam

It turned out that not only did we get lost, everyone got lost. Since this is a big expensive hotel — and NOT brand new, either — the complete lack of signs was infuriating. We almost gave up and went home and might have, but we didn’t know how to get home, either.

Finally, we were stopped by a police detective. He had a gold badge but was in street clothing, so we assumed he was a detective. He pulled us over. Garry rolled down his window. Were we going to get a ticket too? Are the fates so against us?

“Are you guys lost?” he asked. Were we that obvious?

Flowers and the falls

He led us to the hotel and he recognized Garry — and knew we were going to the “Tom Ellis Memorial.” I was never more grateful to see a police officer.

We knew we had to be near it. We were at the docks, so how far could we be from the Seaport Hotel? It turned out to be about a mile. Make a right, take the Ted Williams Tunnel and when you can’t go any further, make another right. 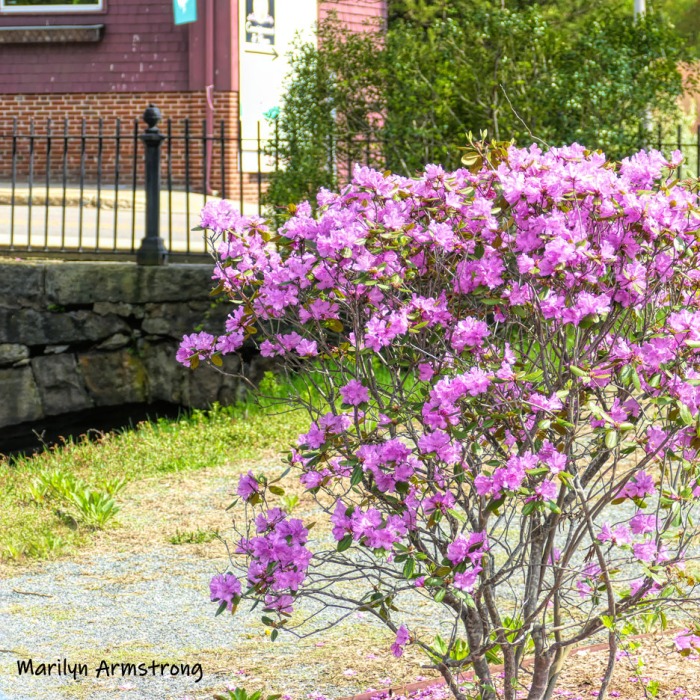 Azaleas along the path

It was good to be there, though. Many people, including Garry, shared memories and since we are all — how shall I put this — an older group of folk?

We got to do a little crying, shared some laughter about stuff no one else remembers. We saw people we rarely see except at reunions and funerals. Remember when we used to meet at weddings? It was good to hug friends, notice that although everyone looks older, I look even older than they do.

We left Boston exactly at rush hour. Three and a half hours for the homeward journey. I spent a lot of time admiring trees.

Please enjoy the photographs. They are from Tuesday which was every bit as beautiful as today, but we were outside with cameras.