WHAT IS JEOPARDY? – Marilyn Armstrong

Is there anyone who doesn’t or has never watched Jeopardy? As game shows went, that has to be the most popular one ever. When I was a young adult, people were addicted to this show. It wasn’t because they assumed they could go on it to win tons of money, though some did hope for that, but because Jeopardy was and remains the original TV trivia game.

This is Trivial Pursuits for the world, broadcast (depending on the decade and year), daily or weekly. It was created by Merv Griffin (what wasn’t created by Merv Griffin?) and has been on the air as a daily (5-days a week) show, a weekly nighttime event, or a daily evening presentation, usually just after dinner time — between 7 and 8 at night – since 1964. That’s 59 years which is a great deal of television! I think the reruns are as popular as the original. Is there any other show that has been continuously broadcast for this long?

Recently, it has become a headline:

“James Holzhauer was aiming for his 26th straight ‘Jeopardy!’ win Wednesday and moving closer to the $2 million mark in prize money.”

And he won. Again. So his winning roll continues. Unless he does something really stupid, he’s will come out of Jeopardy more than comfortable for the rest of his life. 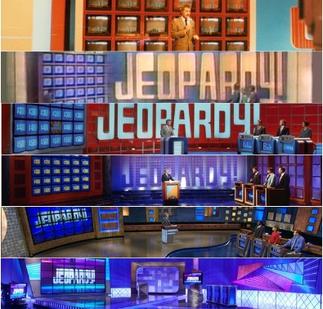 By Source (WP:NFCC#4), Fair use, https://en.wikipedia.org

Unlike most quiz shows, it didn’t give prizes. It was all about money. You got an answer and had to answer the answer with a question. When Trivial Pursuits came out as a board game during the 1980s, I kept being surprised that you didn’t have to answer the statement with a question. While I wasn’t addicted to the show as some people were, I did watch it and much to my amusement learned a lot more miscellany than I’d previously known.

I think writers are the best Trivial Pursuit players because we accumulate tons of random information. We absorb a bit of just about everything, from what we see, hear, and read. We remember bits of conversations about anything we hear or read. You just never know when that bit of information won’t become the lead in or conclusion of your next book, post, or long, shaggy dog story.

For most of the years when I occasionally watched it, Alex Trebek was the host. Since those years — I guess the last time I watched it was during the 1990s, probably with Garry’s mom — who was an addict. But she was in good company. Millions of people followed the show either sometimes or constantly.

Countries with versions of Jeopardy! listed in yellow (the common Arabic-language version in light yellow) – Permission is granted to copy, distribute and/or modify this document under the terms of the GNU Free Documentation License, Version 1.2 or any later version published by the Free Software Foundation. A copy of the license is included in the section entitled GNU Free Documentation License.

It is the most popular show in elderly housing and gave them a chance to show off their knowledge, something old people rarely have an opportunity to do. Of course, we who blog are not showing off OUR knowledge. We’re just hanging out. Online!

Actually, I think blogging is our Jeopardy. We don’t cover quite as big a range of topics as the show does and did, we cover a lot of stuff. I have a genuine passion for writing about whatever weird little idea has passed across my brain.

It doesn’t need to be important. In fact, it’s unimportance is part of why I enjoy writing about it.