I really hate it when everyone starts to yell at each other. It’s like a big family squabble on Thanksgiving — the kind you see in the movies about what’s wrong with the holiday — and I can’t hear a thing. Maybe there was a time when I could pick individual statements from a mad clatter of voices, but if there was such a time (and I’m not sure there ever was), it has long since passed.

Overall, having spent two days watching both debates, I have reached a number of conclusions.

The first one is that this was an awful presentation, poorly thought out. It allowed almost no one to say anything clearly without interruption and was often a literal scrambling of candidates to get a word in edgewise or any other way.

Also, those who show the least likelihood of becoming a viable candidate (and you know who you are) should run for a different office. Senate, if possible because as much as we need a new President, we desperately need at the very least an evenly divided Senate. If your state has no available senate seat, how about Governor, or Mayor of the largest city that needs a mayor?

These are important offices too. They have a lot of clout. We can only have one president, but if the candidates spread out and get elected to the Senate, Congress, Governorship, Mayors races, we will have power in many different places and that would be a good thing.

I was surprised at the intelligence of most of the candidates. To be fair, Trump has set the bar so low, it isn’t hard to step over it.

I love Elizabeth Warren, but I loved her before she took the stage. She is our Senator and I’m proud at how well she stands up for us. That Trump is always trying to cut her down to size is as far as I’m concerned, in her favor. If he weren’t pissed off, I’d have to assume she lacked sufficient status to earn his wrath.

It is a sad commentary, isn’t it? We take the negative comments of our so-called president as compliments and relish them. If he hasn’t made up a fake name for you, you don’t really count.

Julian Castro surprised me. He was intelligent, clear, and collected. He was a good speaker — especially given the clawing and scratching the format required of all the candidates.

Beto O’Rourke seemed lost. On Colbert, Chris Christie commented (I hate agreeing with him) that he was like the kid who didn’t do his homework and hoped the teacher wouldn’t call on him. Oops. While he wasn’t a total embarrassment, he didn’t shine.

I understand that this was basically a 4-hour “say hi to the audience and say a few words” introduction, but it wasn’t well done. Aside from the multiple technical gaffs (shame on you, NBC), four hours was not enough time to even properly introduce each candidate. Not even enough time for each of them to have five minutes to speak on his or her own behalf — UNINTERRUPTED. 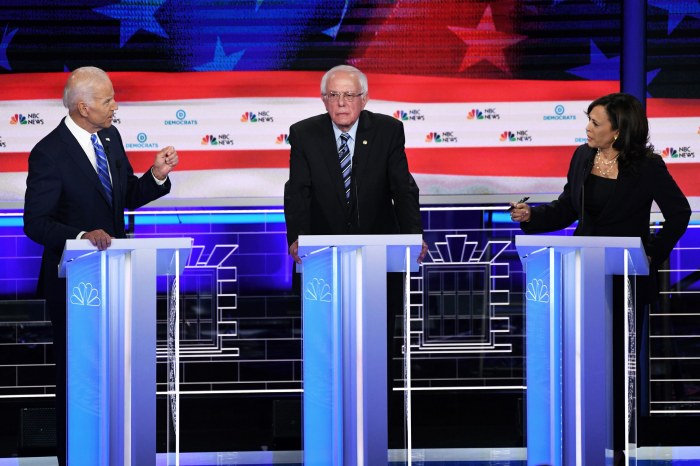 Returning now to Kamala Harris and Joe Biden. Okay, so she was the second little black kid to be bused in California. What Biden never got to say, but which is the truth — and Garry has a couple of Emmys for covering this event in Boston — busing didn’t work. However well-intentioned it was, it did not succeed for black or white students.

Biden was against it and he was RIGHT. She got picked as one of the first children in that fight, but it was a bad fight. It was a losing fight for everyone. He never got to explain his opposition and she was busy being an effective prosecutor.

Do we need another prosecutor running the country? She might make a good U.S. Attorney General, but president? It’s not just about getting your best and most memorable jab in. That’s what we currently have. We need something better, more thoughtful, reasoned, and less single-issued.

What impressed me? That for the most part, everyone agreed on most of what I think are the important issues. From health care to treating immigrants like human beings to making sure that “regular people” can earn enough money working one job to support themselves and their family. There was minimal disagreement on the basics. I thought it was a pity we couldn’t run a bunch of them as a group. 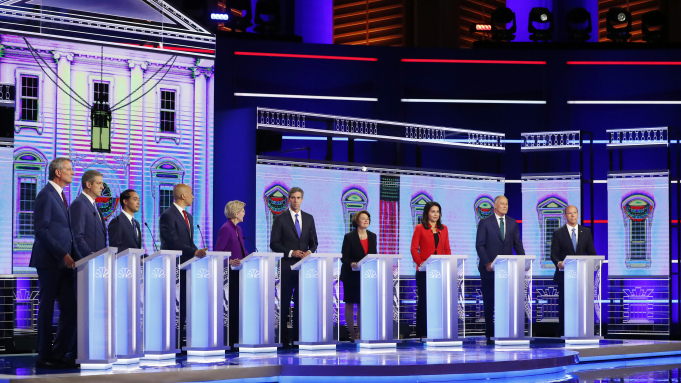 Personally, I agree a combination of private and public health care works well in many countries. Once health insurers are required to compete with a vital public sector, it’s amazing how effective they can be and how quickly their attitudes change.

About half the “nominees” need to find other places to run for office. Of the remaining half, we need sensible debates where people can say something. Asking any candidate for office to sum up anything in a one or two-word answer is ridiculous. It was stupid from the get-go. The debates suffered and we (the audience) suffered.

The moderators kept promising they would get back to individuals, but they never did. These should have been spread out over at least four night, not two. It was unfair to everyone, especially me.

And for heaven’s sake, whoever does the next debates, get your best technical people on the job. Our college radio station did better work than NBC!